“See them… two vastly different young men locked in a bond of friendship, forged by the greatest of the martial artists… destined to forsake the comforts of ordinary human creatures for a dark destiny of danger…

No fighting art is unknown to them… They have mastered karate, aikido, jiu-jitsu-- not as ends in themselves, but as steps on a path that can lead to greatness… or sudden, horrible death!

COMING of a DRAGON!”

Fifteen years back in Kyoto, Japan, Richard Dragon sought to steal an 1,100 year old jade Buddha from a villa. The young strawberry blond man was confronted by O-Sensei, an older bald Asian fellow who would have allowed the theft if the Buddha were his to give. Dragon attacked the sensei, who somehow knew Richard’s identity. O-Sensei spouted fortune cookie wisdom while easily batting the youth about. Dragon pulled a knife, but was swiftly disarmed and tossed to the ground. 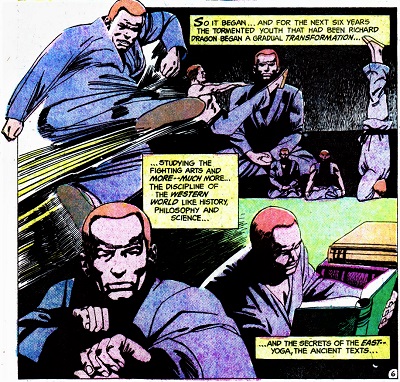 A student approached the combatants, exclaiming “Hoo-eee! You ain’t much for soft landing, are you, friend?” Benjamin was nothing but friendly, offering Richard some fresh brewed tea. Dragon shifted from ageist smack talking the sensei to outright racism at the colored pupil, calling him “a refugee from a minstrel show.” The bigoted, potentially murderous little jerk continued, “I got pride, and it won’t allow me to accept anything from an ape! I’m gonna shower those pearly teeth all over the dirt!” Benjamin chuckled, “I do believe you’re the excitable type,” then cooled the cat off by leveraging him into a fountain. “Ready for that tea, Rich?” Ben explained that this was “A school, pardner! The O-Sensei teaches a few of us to become ourselves… better’n ourselves, matter of fact.” O-Sensei sensed Dragon carried in himself a great burden of hate around a core of goodness that he wished to cultivate. With neither kin nor comrade, Richard Dragon accepted an invitation of education.

After six years of transformative training and reading the wisdom of Eastern texts, Richard Dragon joined Benjamin in addressing a group of goons spying on the villa from a jeep nearby. The men were looking to test the mettle of the twin martial artists, and were treated to a beating. A fourth man waited in the jeep-- an older, corpulent, bald Asian in a brown suit and fedora. Puffing on his cigar, Barney Ling wasn’t disappointed with O-Sensei’s star pupils, and the instructor soon joined the conversation. Ling represented an international peace-keeping group named G.O.O.D., “what the initials stand for is not important,” only the students’ willingness to help the cause. Benjamin dismissed, “Me, I don’t care! I’m not interested in bein’ an organization man!” Ling mentioning modern day slavery in the Sudan changed his tune. “I have a photo of the kingpin… an Afghan who calls himself Aki!” G.O.O.D. wanted to cripple the slave trade by bringing Aki in for questioning, and Benjamin thought maybe he could cripple Aki in the process. “Please! We are never crude! We merely wish you to deliver him to us… unharmed!” Richard Dragon was unsure how to proceed, and asked O-Sensei’s advice. “When a worthy cause speak to the superior man, he answers! Does this cause speak to you?” Benjamin replied, “Plenty! Okay, Mr. Ling… I don’t care a whole lot for your style-- you do a lot of smirkin’-- but count me in!” Dragon agreed. 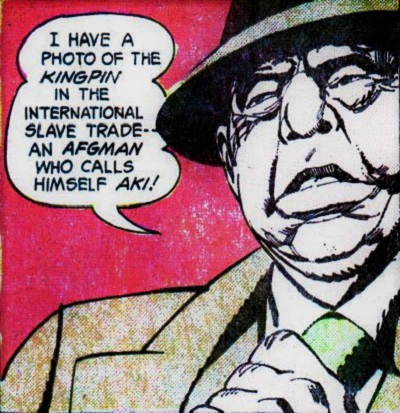 “Early the following day, a private jet whisks Benjamin and Richard across the roof of the Earth… to Ta’iss, the capitol of Yemen.” A dhow carried the pair to the Sudanese coast, where they easily located Aki’s fortress and army of bodyguards. Richard had the idea of having Benjamin sell him into slavery to access the fortress’ interior, but Aki decided, “the black who brought him is valuable, too! Seize them! Lock them in the pens! Tomorrow they will add to my wealth!”

The pair were taken to a dungeon hellhole filled with starving, diseased captives in cages. “Rich… I feel like bein’ sick!” Dragon wouldn’t allow himself that luxury as he picked their lock with tools Benjamin had secreted in his manacles. “Free the others, Ben! I’ll scout the area!” Dragon was spotted, and couldn’t put down the guards before shots were fired. The flood of released prisoners provided a distraction so that the G.O.O.D. men could evade more guards. “I feel rotten… Rich, we’re usin’ those poor folks!” Dragon justified it by their acting to prevent greater misery.

The combined strength of the pair’s martial kicks brought down a heavy wooden door protecting Aki, and their fists of fury addressed his elite guard. “Together they stand… Benjamin Stanley, once of Harlem… and the fiery youth who calls no place home—Richard Dragon…” Ben took out the last of Aki’s men with “a single, magnificent side kick,” but was struck by a bullet fired from Aki’s own shaky pistol. “Every trace of humanity drains from Dragon’s face as he gazes at Aki with empty eyes,” then he jump kicked the slave trader through a window into a waiting mob hungry for vengeance. 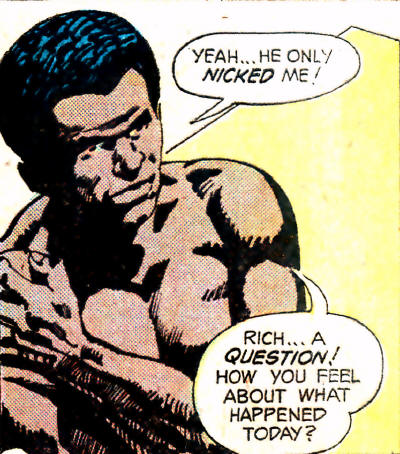 Ben, having only been nicked in the shoulder, observed “Ugly! They aren’t leavin’ much for the undertaker, are they?” Dragon echoed O-Sensei: “A man’s actions are the architects of his own reward!” Ben wondered how Richard felt about what had happened. “We’re changed, Ben… We’ll never be the same again! We’ve taken the first step on a long path… and I’m not sure where it’ll lead! But, I am sure of this… we can never turn back!”

Kung Fu Master Richard Dragon: Dragon's Fists was a 1974 novel written by Dennis O'Neil and Jim Berry under the pseudonym "Jim Dennis." I've never read it, but I understand it was essentially a Remo Williams: The Destroyer rip-off that never made it to a second book. Instead, the book was adapted into the first few issues of a comic book, and then licensed/sold to DC Comics from then on. The art on this initial outing was by Leopoldo Duranona, probably best known for his Warren work, and his unusual style suits the material well. Benjamin Stanley would eventually morph into Ben Turner, the Bronze Tiger. The shockingly racist Richard Dragon would eventually become the "retired gun slinger" of kung-fu for DC, training the occasional urban vigilante on the side. Neither ever became major selling points for any books, but Denny O'Neil helped assure them elevated status in the DCU's martial arts world, specifically through their relationship with the upcoming Lady Shiva.

Posted by Diabolu Frank at 2:14 AM