Mike's Amazing World of Comics is an excellent resource for four-color knowledge, and the primary facilitator of this column. However, it is not infallible, and failed to list one of the more important comics of my early reading days. I believe that I found a copy of DC Sampler #1 at a flea market booth that was the closest I would get to a comic shop for years. It was a giveaway, so the price was right, but it technically wasn't a comic. No normal person could make the distinction, since the proportions were correct and its pages were filled with super-shenanigans involving hand-lettered text. According to Mike, it came out on June 30, 1983, but there's no telling how long it took to find its way to me. It was probably one of the single most important comics I've ever owned, since it was my first exposure to the whole of the DC Universe at the specific point in time when I was making the transition into devoted comic collecting. I stopped updating this column because I felt I could not go further without looking at the book, but of course I can't seem to find my copy anywhere. Frustrated, I've decided to wing it with hazy memories and internet resource, just like pretty much every other Résumé post I've done so far.

Ed Hannigan isn't revered enough for his streak of unforgettable Bronze Age covers. Somewhere around the house I have a benefit comic collecting a bunch of them (unfortunately only Marvel ones,) and you can spend an afternoon trying to recall how many of them have been blatantly swiped in the years since. Despite the number of characters and density of alien technology on display, the cover feels spacious and inviting, as opposed to cramped and discordant like entirely too many seen on : The Definitive Directory of the DC Universe. This first Sampler featured mostly new art created just for this project, which by rights should make it a hot commodity in the back issue market, but you can inexplicably still pick it up cheap. The entire production budget for most free sampler books over the past twenty years would probably have been paid for what it cost to commission this one piece, but that effort and expense also makes the difference between a cherished memory and some filler crap I threw in the garbage. See that cover to DC Comics: The New 52 #1 above that some gopher threw together in Photoshop? I've got two copies I never even gave a proper thumbing through lining the bottom of a milk crate, and I only know that because I stumbled across them trying to find my copy of DC Sampler #1.

Getting inside the book, following a front page Meanwhile... column by Dick Giordano, Jerry Ordway provided this poster image of the All-Star Squadron. I could tell the characters were meant to be old fashioned, but I don't know that I had a clear perception of Earth-2 at the time. They seemed a bit silly and weird, but the art was fantastic, and I was intrigued by the more X-Menish Infinity, Inc. I ended up buying a few issues of A-SS off the stands, and have more terrible copies of Infinity, Inc. in my longboxes based on the intrigue inspired by fresh pieces like this. Arion, Lord of Atlantis got the next spread, probably by Jan Duursema, and featuring his supporting cast and villains. Promotional images for this book were always fascinating, and I wanted to get into the book so much, but as written by the reliably boring Paul Kupperberg my every attempt was met with meh. The Omega Men got the next spread. When I was in grade school, I got to spend less than a week at a summer camp as part of another sort of free sampler, and I managed to talk a councilor out of a postcard he had featuring the art from the first issue. Anything "omega" is inherently cool, Chuck Heston swipe be damned, and I liked the idea of a finite intergalactic war along the lines of Star Wars and Dreadstar. Never quite got into the book, but I did try.

According to the Grand Comic Database, Don Heck drew a Wonder Woman spread. Not a much revered time for the Amazing Amazon, and my vague recollection of the composition of the image is not kind to the artist or his subjects. I surely preferred Jim Aparo's Batman spread, teasing the arrival of the Outsiders, but the image isn't firm in my mind. They did cancel my favorite The Brave and the Bold to make room, which would ultimately diminish my Caped Crusader collecting and foist one of comics' worst teams on the public. I can still picture Ernie Colon's Amethyst, Princess of Gemworld spread though. She was bursting out of an energy portal, her grinning supporting cast in tow. There were some nifty designs there, and I continue to regret never giving her book a serious chance. I was much more interested in the George Perez New Teen Titans spread, and all the questions it posed. This was followed by a cute spread in which the G.I. Combat creative team were lined up for execution by firing squad. While Sgt. Rock and Easy Company were well past their prime, Kanigher and Kubert's book had another four years left in it.

I read World's Finest off and on, so the patchwork pitch registers only as a blip. I got a bigger kick out of Keith Giffen and Larry Mahlstedt offering silent panels of Legion of Super-Heroes action married to semi-obscure old DC logos ("Secrets," "Mystery in Space," "Young Love.") It did nothing to satisfy my curiosity about the 30th Century though, since I could never find any Legion comics back then, and I knew them only from house ads. Carmine Infantino did a Flash spread that did a good job of recapping the extended story arc involving the Reverse Flash's murder of Iris West, attempted murder of Barry Allen's new fiance, and the Scarlet Speedster's murder trial for killing Professor Zoom. I never liked speed powers, but it made the Flash seem a lot more interesting, and I tried his book as a result. Also, I think this Gil Kane Superman spread was in here somewhere, but it wasn't listed on GCD.

In another case of false advertizing, Arak Son of Thunder got a spread by Ron Randall during his mohawk phase where he grabbed a satanic entity by the horn while swinging through the air and brandishing a tomahawk. So Conan! I read a few Araks, and they came across more like Prince Valiant. Supergirl was being done by Paul Kupperberg and Carmine Infantino at the time, which meant her spread was like the Anti-Flash's. It was a series of panels that made the Maid of Might look ridiculous, like being miniaturized, multiplied, and sucked up in a vacuum cleaner by cornball villains. In direct contrast, Pat Broderick was completely forgiven for inserting himself and Gerry Conway into a spread for The Fury of Firestorm, the Nuclear Man because his detailing on characters like Tokamak and Flamebird was revolutionary. I'll never understand why an artist as intricate and influential as Broderick wasn't a bigger name, and I enjoyed him both on Firestorm and Captain Atom. Get a bigger, better view at Firestorm Fan. What a great parting shot, from a book that may have cost DC a fortune with no short term gain, but paid off dividends in softening my heart to their wares for decades afterward.
Posted by Diabolu Frank at 2:59 PM 0 comments

According to Wikipedia, "Illusion On-Demand is an American VOD Video On Demand cable TV network focused on science fiction and fantasy programming. Illusion launched nationally in October 2007 with a special Halloween lineup. The regular programming consists of 21 shows and content blocks." I'd never heard of it, but while killing time checking out free programs on my cable box, I stumbled upon a 21 minute program counting down the "network's" top comic book bad guys. The production values were YouTube low, mostly static images (pulled directly off sites like Comic Vine and Wikipedia) with generic screen script and extremely repetitive bland (Creative Commons?) rawk music playing. Anyway, this sort of thing is how I gets me kicks, so here's their(?) picks...

20. The Kingpin (presented by Dan Slott) 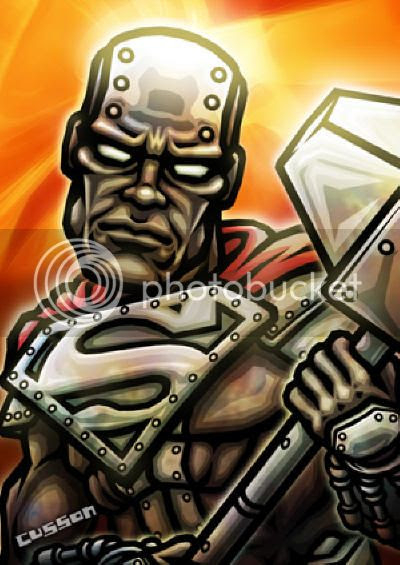 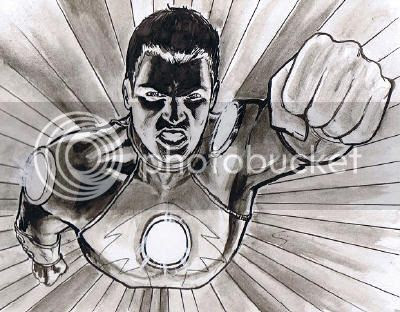 Adam Blake is one of my favorite DC obscurities, and my exploration of the character's history on another blog helped inspire the creation of DC Bloodlines. It's about time I took the opportunity to revisit him!

Posted by Diabolu Frank at 1:52 AM 0 comments