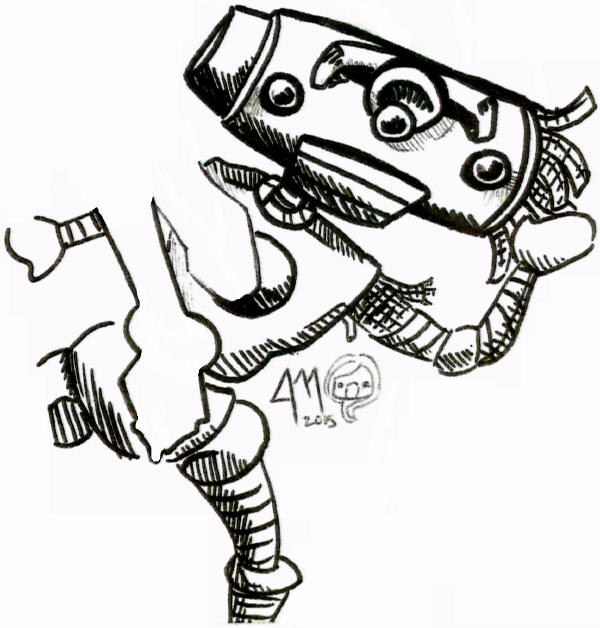 Hoshikko Ink is a company for artists which was originally founded in 2009 by Morgainne and her family. Their debut started in Baton Rouge, Louisiana at Mecha-Con where Morgainne first displayed her art in the Artist Alley.

Mecha-Con became a HUGE sucess and the company decided to sign up for more tables at other conventions. Together they traveled to over 12 conventions all over Texas and Louisiana within the next few years.

These conventions include, Anime Matsuri, Oni-com, Anime Overload, and even some comic conventions such as Comic Palooza!

Hoshikko Ink took its short leave on the winter of 2011 so that Morgainne could continue to focus on school.

On the Summer of 2013 Hoshikko Ink Decided to come back with a new look and new website.

L-Ron was the droll, sardonic robot servant of Manga Khan before he was traded to Maxwell Lord in exchange for (if I recall correctly) a fetal form of Despero. He (It?) palled around with Max and J'Onn J'Onzz for the last couple of years of Justice League International, until L-Ron was willingly cannibalized for parts to build a mind-control collar for the adult (again) rampaging Despero. As an unexpected byproduct, L-Ron's mind displaced Despero's, so the little robot became an adventurer in the hulking Kalinorian's body. Whenever you see pictures of Despero from the '90s toting guns and wearing military style pants, that's actually L-Ron. Also, he was a member of the Justice League Task Force, serving under the Martian Manhunter beside Gypsy, The Ray, and Triumph (among others.) Eventually, Despero reclaimed his form and L-Ron returned to his robot body. I think he was last seen back with Max Lord working for the Superbuddies (prior to Infinite Crisis.) Given his obvious namesake, I'm not sure DC is hot to ever use L-Ron again, but seeing as Max Lord isn't a proper master anymore, I'd like to see him play Alfred to J'Onn's Batman someday.

Ali Morgainne has a background in manga art and seemed capable of providing a cute robot, so she was part of a rapid fire series of building jam commissions I had done on (I think) the last day of Amazing Con. While looking for reference, I picked a comic with plenty of full body shots, but didn't realize it was also the issue where the partially deconstructed L-Ron was possessed by Despero and fought what was left of Justice League Europe. Hence the loose wires and "battle damage," but what the hey, it specifically recalls the Despero connection. I think it works, and it's J'Onn's 61st birthday today, so he wouldn't turn a friend away over that!

Hoshikko Ink
Posted by Diabolu Frank at 12:00 AM 1 comments 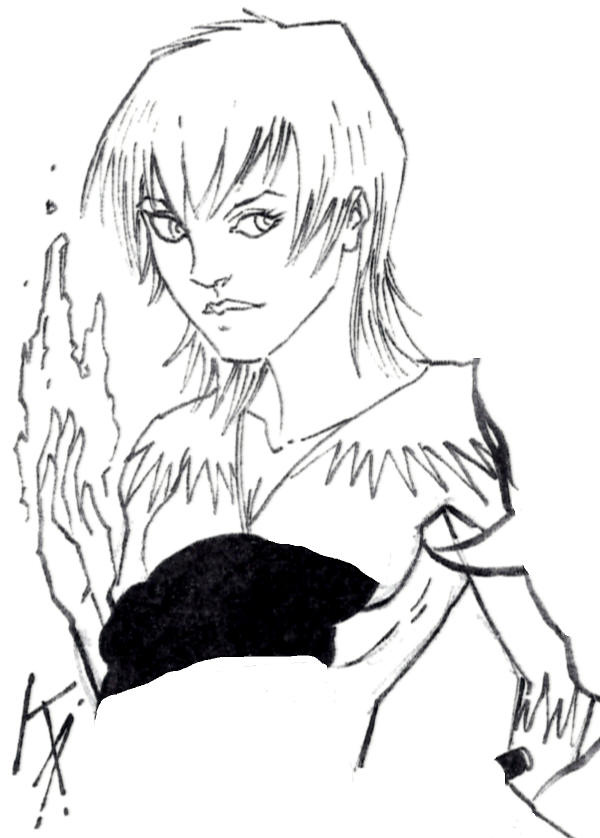 Tora Olafsdotter isn't even my favorite super-heroine named Ice Maiden, but she was a vital member of Justice League International and key foil for Guy Gardner and her frequent partner in anti-crime, Beatriz da Costa. I didn't intend for Fire & Ice to be scuttled off to the side as busts while The Blue & Gold got full figures, but that was before the cost and space of trying to include the entire JLI in a jam caught up with me. I decided to keep them on one art board and only include the core JLI members, so here we are. At least Ice got a known comic creator in Karl Altstaetter, of such girl-powered books as Deity, Saint Angel, Lady Pendragon and Vampirella. He's probably best remember for his stint at Extreme Studios on Bloodstrike and other Youngblood related titles. I tend to associate him with Q-Unit, which was heavily promoted with some sort of layered techno trading card deal, but got caught in the speculator bust and only released one issue. I was a dealer back then, so that kind of thing sticks with you. Anyway, I think Altstaetter captured Tora nicely, and the duo combined for a fine showing on the total page.

Karl Altstaetter
Posted by Diabolu Frank at 12:00 AM 0 comments

The most incompetent canine Green Lantern in Corps history (it's pronounced "Nort," like The Honeymooners' Ed Norton) is in an unusually foul mood here, unable to attend J'Onn J'Onzz upcoming 61st birthday party, but R.S.V.P.ing a ring construct in his stead. But constructs can't eat Oreo cake...

Eden Bautista
Posted by Diabolu Frank at 12:00 AM 0 comments 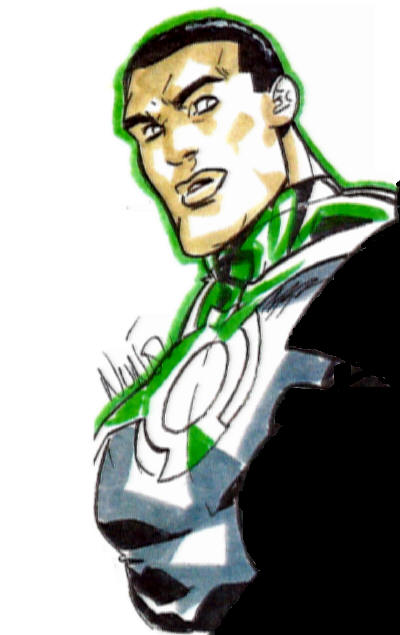 Eddie Nuñez has worked on Fanboys vs. Zombies, Ben 10, Valen the Outcast, and Flashpoint: Lois Lane and the Resistance.

Eddie Nuñez
Posted by Diabolu Frank at 12:00 AM 0 comments

Here's another entry from the "I'm A Terrible Art Patron" series. When I first started doing jams at Comicpalooza two years ago, it was a total free for all where I was running multiple boards all over the floor without much forethought. I wanted to do something with Justice League International, so when the artist Oliver Banks said he only did full figure commissions, I figured he should just go ahead and start his own board. Since this would be a central figure and Banks had a cartoony style, it seemed a safe bet to get my favorite JLI member (though I hasten to add not my favorite hero who was a JLI member, an important distinction.) During my big plunge into DC Comics around the Zero Hour event, I got really into the Warrior series by Beau Smith & Mitch Byrd, making once and future GL corpsman Guy Gardner my favorite super-hero for, eh, four to six months there. The worm turned once Byrd left the book and a rotating selection of artists finally settled on Marc Campos (and a Jack Burton meets Indiana Jones vibe settled on "what if Ben Grimm got the Venom symbiote." Which sounds better than it played out.)

Anyway, I think Banks did a great job capturing the character and launching the jam, but promptly misplaced his business card and forgot his name. Heck, I'm not even 100% sure I got the piece at Comicpalooza, since Space City & Amazing Con followed in quick secession to form a blur in my zeal. I could probably triangulate by date, since a scan simply titled "guy" has sat in a folder on a thumb drive since Saturday ‎May ‎31st of ‎2014 ‏‎at 2:32:44 A.M. I kind of wish I'd done another scan to make the blacks richer, but instead of second guessing my self of 2014, I'm going to assume contrasting would have washed out the gray tones too much. When I finally unveil the completed jam on the projected schedule of 2027 A.D. based on my established pace, I'll work that out.

Moving along to the following year, I ran into the Bankses (his delightful wife accompanies him at shows) and got a new card, which I did nothing with for yet another year. As both sit in front of me now, I have to repect his progress from a simple Spider-Man silhouette and a single piece of contact information to a two-sided full color work featuring the iconic shot of (Banks as) Finn from The Force Awakens removing his stormtrooper helmet under the desert sun, plus seven separate contact resources. It's among the best of the stack of business cards I've now bundled together to try (sometimes still in vain) not to lose track of who did what on art pieces I haven't effectively promoted. Plus I've got a whole other jam piece by Banks that I still need to run. That's why I stuck with the Aliens 30th Anniversary single artist commissions this year, so I can stop sucking at giving these excellent artists a more proper (and timely) forum!

Oliver Banks
Posted by Diabolu Frank at 5:32 AM 0 comments 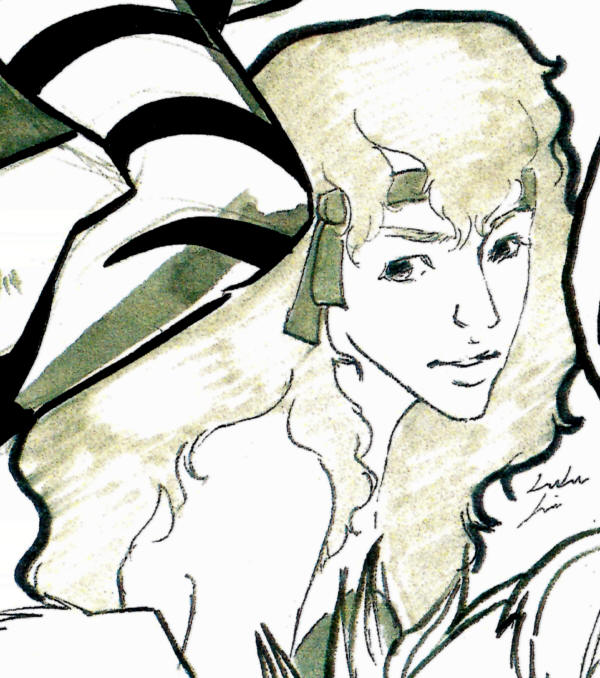 Beatriz da Costa, also known as Green Fury and Green Flame, is surely best remembered for her stint in Justice League International as the hot side of the super-heroine duo "Fire & Ice." That's the role she serves in this commission, a piece filled with "friends of Martian Manhunter" for the Alien Atlas' 60th birthday. I was still learning to what degree I needed to play "art director" on jams, with the correct answer being "75%+" or else you ended up with a collage where no one exists in the same space. In this case, I had a gap between the central figure in the piece, a partial VHS box cover style floating head, and a heroine drawn in full figure. A sort of JLI theme had emerged, and though it amounted to giving them short shrift, head & shoulders shots or Tora & Bea were placed opportunistically.

I had Ice done in 2015, and I kept meaning to add a flying Fire figure in the remaining space, but I kept putting it off. Maybe in the back of my mind I realized that was untenable, and I'm glad painter Lulu Lin had the good sense to better complement the existing Ice Maiden by having her best friend drawn to scale. She's mostly done in pencil with light inks for interior definition and a thicker overall outline. She's in full early '90s rocker mode, headband and all, but I like the delicate line the artist used here. She also shaded Bea's hair entirely in pencil, which unfortunately doesn't come through in this scan. Lin's paintings are very cool, and I hope someday to pick one of them up, but in the meantime urge you to check them out below... Lulu Lin
Posted by Diabolu Frank at 3:47 AM 0 comments