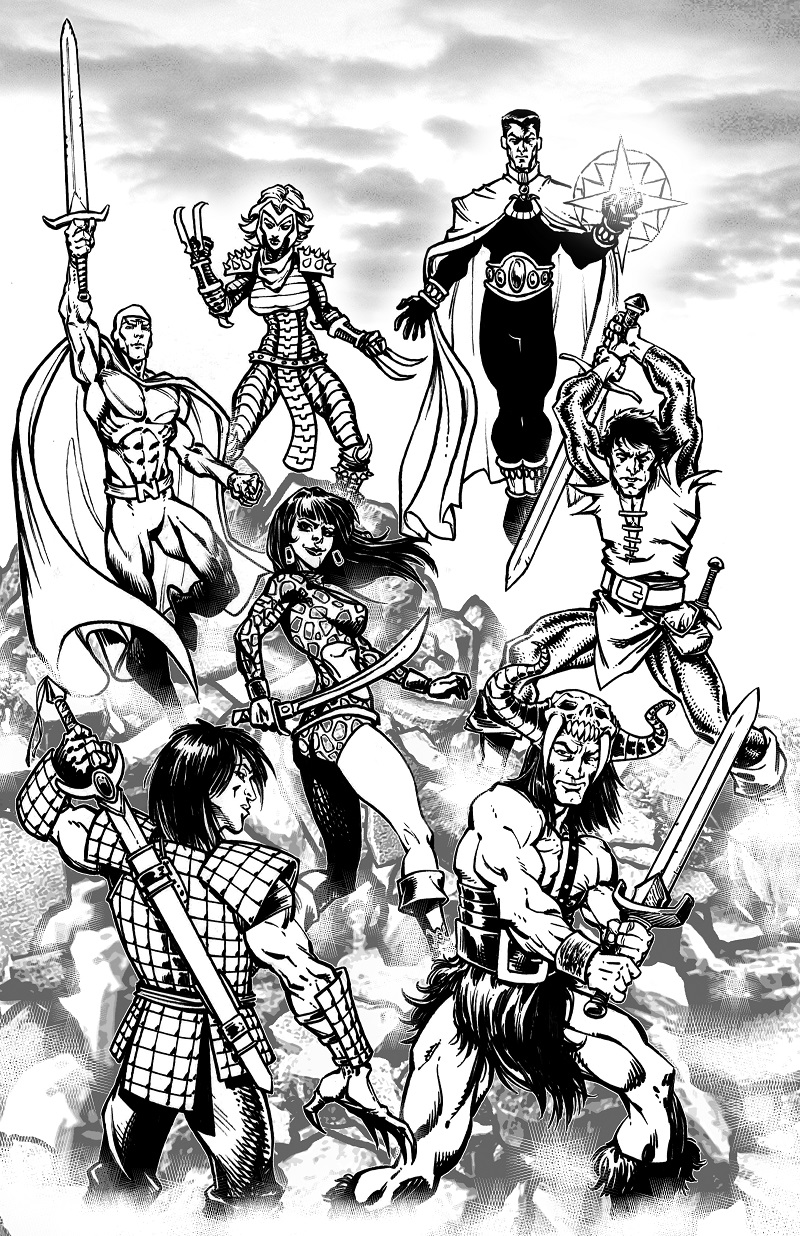 Spinning out from “Lords of the Ultra-Realm” and continuing along similar lines as “Justice League Extreme #1”, I got so jazzed about playing with DC's obscure and unfamiliar sword & sorcery characters that I ask to expand to a diptych. Since I was more or less doing a comics adaptation of the Warlord toy line with the first one, this was a lot less formed of an idea. I hadn't realized when I made the ask that the artist wasn't even advertising commissions at the time, and I here I was asking for two without having a clear idea of exactly who I'd even want.

Thankfully, Brad Green put up with my nonsense (again) and delivered another dynamic piece (again again.) The main reason I wanted to do this was because I was so impressed with Beowulf's 1970s design, and I knew Anj would love to see the Dragon Slayer again. I was such a pain about art direction on the first commission that I tried to keep quiet this time, but I was pleased that Green recognized the same aesthetic appeal and fore-fronted the dude.

I kind of robbed Claw the Unconquered and skewed the premise, but I just really prefer John Chan's design over Valcan Scaramax's Conan repaint. I also was reliant on prexisting logos for the project, and Primal Force was a great fit. The Asian representation was a bonus, but more so, Green threw so much into Claw (especially his sick namesake extremity) that I'd argue this is the best drawing of the character ever. The original Starfire checked a lot of the same boxes, including stretching the gag, but I think including her just enriched it with the Moorcock vibe her co-creator David Michelinie strove for in connecting her to Star Hunters and Claw.

Stalker #1 was one of the first comics I ever owned, so this was my greatest sentimental favorite. Between the two pieces, I also got to revisit a bunch of characters I'd been tantalized with by the 1983 DC Sampler, so Arion helped to round out the lot. Aside from an insane artistic rookie season that included a young Bernie Wrightson, I never had much in for Nightmaster, but his premise and swordcraft sure fit this scene. The only real oddball is Anima, but her dual nature and dark fantasy ties kept drawing me to use her. She weirdly fits here, and with the Marvel Family, another player in my premise. She's even kind of a Johnny Thunder revamp, and you may have noticed that I have a spot for New Bloods.

I continue to admire Brad Greens ability to not only balance out bunches of diverse (and conversely somewhat repetitive) characters, but to find ways to give each their own spotlight while doing things that are visually interesting. Five of these people have swords, but they're all swinging in different directions, striking unique poses, telling you a bit about themselves as individuals. I like to change things up and work with different artists, but when Ive got the opportunity to get a piece from someone this good, it's hard to pass that up!