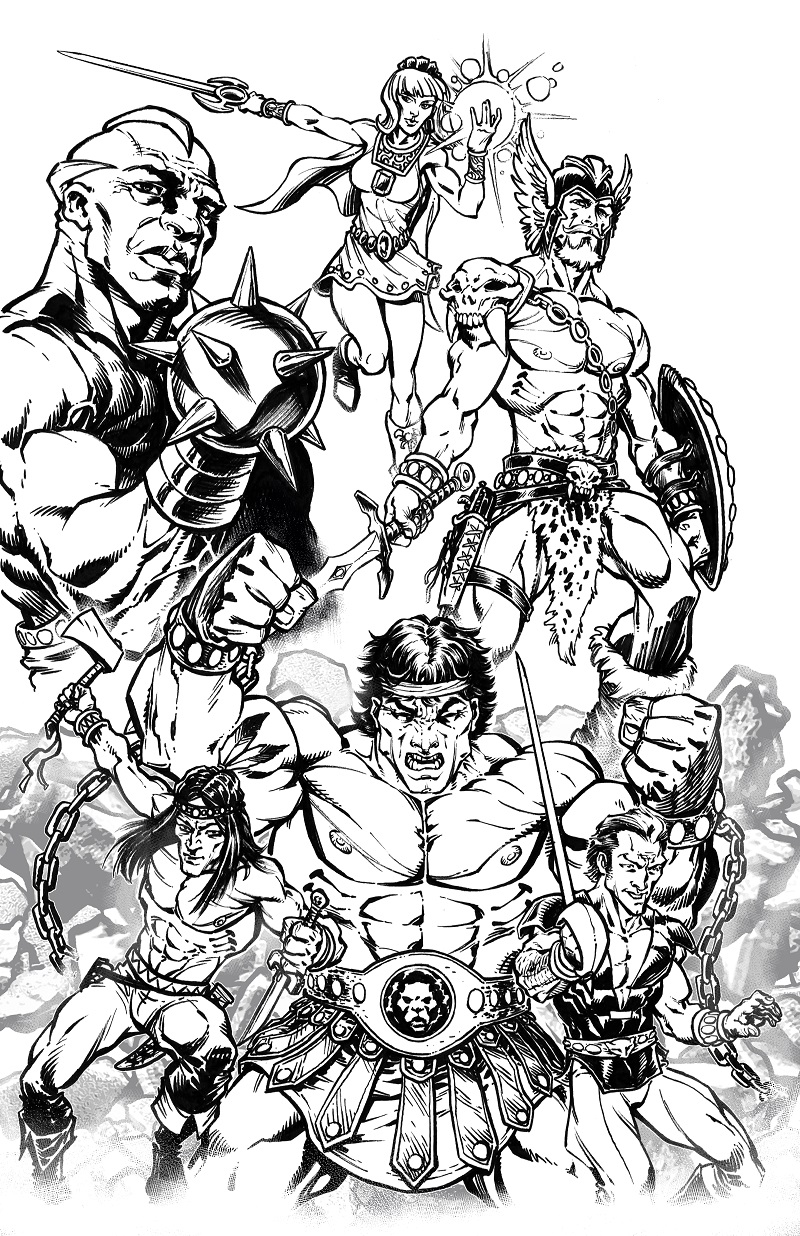 Continuing along similar lines as “Justice League Extreme #1”, I asked digital artist Brad Green to produce another mock cover to promote a fanfic figment of mine. This time I wanted to Enter the Lost World of The Warlord, the cheap knock-off Masters of the Universe figures produced exclusively for K-Mart by Remco Toys that I loved as a kid. Several characters from Mike Grell's Skartaris were assigned to me for Who’s Editing #14: No Man Escapes the Editors, so I went whole hog and involved the entire line (even The Warrior Beasts.)

I've got to be honest, from personal experience, I usually hire African-American artists to draw Black characters because other artists seem to struggle with that subject. Thankfully, Green does not have that problem, as he accurately and attractively rendered Bloodwynd and now Machiste. The warrior-king is featured prominently here, with lush rendering in the muscles that recalls the Philippine artists responsible for most of these Frazetta-type titles the the '70s & '80s. He ended up being a pivotal figure in my story, the leader of the group, so I'm glad that was reflected here.

Next we have a lovely Amethyst, Princess of Gemworld, who was not in the toy line. However, she was slated to star in one of her own in the mid-80s, until She-Ra, Princess of Power stole her thunder. So besides adding some gender representation, her inclusion is also a nod to what could have been. A shredded Travis Morgan, namesake of the line, is my favorite of the figures present.

I was tempted to use the short-lived Mohawk Arak Red-Hand from when I was introduced to him in the DC Sampler. Green favored the more classic visage of the Son of Thunder from the toy line, plus I ended up using his lookalike descendant Arak Wind-Walker in the story, so it was all to the good. We get a huge Hercules Unbound, and where some would have wanted the ornate late-series redesign by Walt Simonson, I favored the earlier José Luis Garcia-Lopez/Wally Wood look. Finally, one of my all-time favorite toys was named for Mikola Rostov, but the had little in common. I was sorely tempted to send Green toy reference, but that wouldn't have been a remotely accurate take on the comic character, and I felt like that would be too much of a liberty with the premise.

I needed logos for my project, and it made sense to recycle DC IP. I always thought Lords of the Ultra-Realm looked metal and had boss house ads. As research, I finally read the mini-series, and even did write-ups for Comic Vine. It wasn't great, but the premise was very promising, so I borrowed liberally from it for this project. Seeing Green's presentation art shape up really got me jazzed, and as usual, he did an excellent job with the illustration. It was so nice, in fact, that I asked him twice. That's a story for next week, though...

Brad Green
Posted by Diabolu Frank at 1:17 AM 0 comments