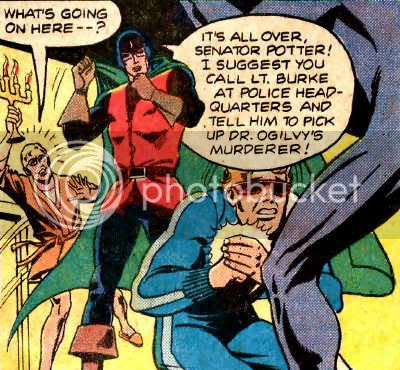 Dr. Mid-Nite was wrestling with would-be narcotics dealer Alvin Miller in Memorial Hospital's medical supply room, even though his infra-red goggles now did little to help his fading eyesight. Applying a blackout bomb to a situation that once would have been a cakewalk, Mid-Nite found "It's far worse than I feared! I'm becoming totally blind-- even in the dark!" Dr. Mid-Nite had to rely on his experience and hearing to knock Miller out, right before the cops showed. "Luckily, I know the layout of this hospital well enough to get back [to his office] without revealing Dr. Mid-Nite can't see! Having a blind super-hero and a blind doctor would be too much of a coincidence!"

Dr. Charles McNider contacted his old friend and ophthalmologist Dr. Gordon Ogilvy in hopes of saving his super-hero career. Ogilvy had developed glasses that worked like sonar, and was testing them a young man named Tim when McNider rang his telephone. Gordy explained to an insistent Tim the glasses still needed work, but told McNider over the phone they were coming along great. Tim beat Ogilvy to death with his cane, leading Dr. Mid-Nite to rush to the scene. Mid-Nite's vision returned intermittently, so he combined it with his detective skill in search of Tim. Luckily, two toughs on the seedier side of town just happened to discuss a $1,000 bet that blind Timmy couldn't swipe one of Senator B.J. Potter's collection of sculptures in McNider's earshot.

Dr. Mid-Nite caught up with Tim inside the senator's mansion, but the former's night-sight was again fading fast, so the latter slugged him easily. "A blackout bomb will blind him-- What am I thinking about?! This guy is able to see in the dark-- better than I can!" Worse, Mid-Nite's night-vision finally conked out!

Mid-Nite's only advantage was that he knew Tim's glasses only drew shapes through movement. The Doctor hugged a wall, leading Tim on. The murderous thief decided "this time I'm doublin' up my fist-power" and punched a statue draped with Mid-Nite's cape with both his now broken hands. The big ball of stupidity wrapped with the senator investigating via lit candelabra, as though the story took place during the late 19th century.

Alvin Miller, dude raiding the hospital supply room, was provided a surname for two pages of work. Tim should be so lucky, as he was sent up, and his victim put in the ground. Millions lost out because of a "foolish wager," though Mid-Nite hoped to adapt Ogilvy's glasses for his own problem. "Combined with my infra-red goggles, Gordy's seeing-eye-glasses will enable Dr. Mid-Nite to continue his fight for justice!"

This silly back-up story from DC Comics Presents #29 was bungled by Bob Rozakis, Alex Saviuk and Joe Giella.
Posted by Diabolu Frank at 12:00 AM

Labels: Doctor Mid-Nite, Whatever Happened To...