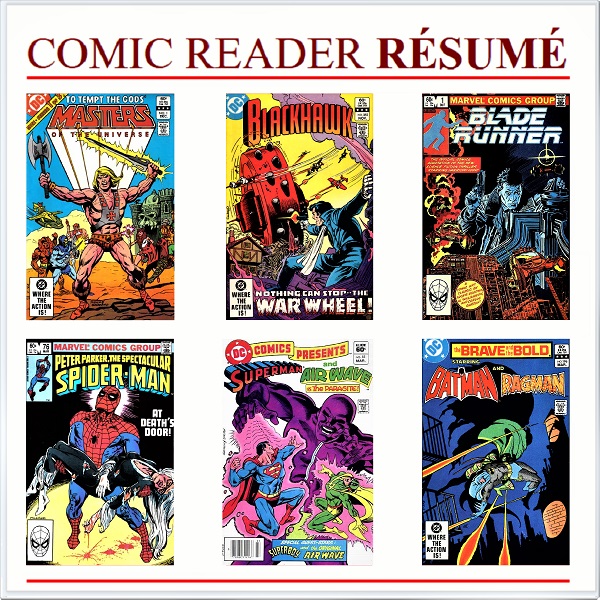 ré·su·mé [rez-oo-mey, rez-oo-mey]
noun
1. a summing up; summary.
2. a brief written account of personal, educational, and professional qualifications and experience, as that prepared by an applicant for a job.

In 1982, a standard size comic new off the rack cost sixty cents. Meanwhile, I could buy loose back issues at the local flea market for a quarter or sometimes less. Even in my youth, I appreciated value for the dollar. This helps to explain why I took much of the rest of 1982 off as a newsstand collector. In September, it took Masters of the Universe #1 to get me to pay full cover again, and it pretty much immediately put me off. I actually came back for the second issue, and shame on me, but at least I skipped the third issue in a three-issue mini-series devoted to a toy line I was actively collecting AND I even watched the risible cartoon for a while. This should have been DC's answer to the recently launched G.I. Joe, but it was such a dull sub-Atlas Howard lift that it couldn't even hold the attention of a fervent, forgiving fanbase.

I was surprised when Skeletor appeared to die from catching He-Man's sword in the chest after a Superman team-up in DC Comics Presents. When this #1 seemed to open with an epilogue, and declared Skeletor totally alive, I felt cheated. Alfredo Alcala did a fine job livening up George Tuska's pencils, but to a kid there was something oddly icky about Alcala. I couldn't articulate it then, but he had a 70s Eurocentric vibe that, when applied to half naked barbarians, made me feel squicky. Aside from Teela in an unflattering one-piece, this book looked like a Joe Weider catalog. I guess you could call it an early bout of homophobia in the most literal sense, turned off by all this lumbering gristly beefcake without the tenderizing of a Barry Smith or the comparative cheesecake of a John Buscema, as if that was something Big John was really known for. I should point out that I came to love Alcala later on horror titles, and the art here is much more appealing than Don Perlin and Herb Trimpe alternating on G.I. Joe. I think maybe it's just that Paul Kupperberg was no Larry Hama, or I guess even a Bob Budiansky, if you swing that way. The DC mini-series felt misaligned with the mini-comics packaged with the figures, and came across as a Conan wannabe even from my far less critical formative perspective. The story just did not hold my attention, and in fact Kupperberg would disappoint me so often in my youth that it was a revelation when I connected the dots years later. I skipped October and November.

Now December was a banner month, though. When I saw that blood trailing down Black Cat's arm in Peter Parker, The Spectacular Spider-Man #76, I had to have it. I'd read one other Black Cat comic, but I had that bonding through familiarity that only children can produce with such ferocity. Unlike the Skeletor tease, Felicia really was stabbed, smooshed, and slashed all to hell by the arms of Doctor Octopus and the forces of the Owl (yes, the Owl had forces back then.) Also, this all happened while she was in bondage wearing a skintight outfit with deep cleavage. In another contrast from He-Man, this was probably my first pass at sadomasochistic pulp exploitation, which I was perfectly alright with. There was even some great melodrama as Peter tries to pass a college final in a daze while thinking about his girlfriend in critical condition. Whatever his faults, Bill Mantlo could write circles around Kupperburg's functionality. Jim Mooney was also an inspired embellisher over the often stiff Al Milgrom, giving him fluidity, softening the edges, adding romance, and yes, sex appeal. Milgrom was great with conveying emotions, though. I haven't read the story in decades, but I remember it so vividly that I don't really need to.

Then there's DC Comics Presents #55, which I don't remember so well. I'm not really sure why I bought this one. I liked Superman, and he appeared to be crushed to death in a two page spread, but it was a fake-out. I think I'd seen Parasite in a coloring book, or just thought he looked cool. I would have a heightened awareness of Air Wave from then on, of the "oh, hey... Air Wave... huh" variety. Horrible costume, dorky powers, thin connection to Hal Jordan... blech. I think there was a villainous train conductor riding a mini flying choo-choo in this, and I know the original Air Wave wore roller skates that let him ride on top of telephone/power lines. That's something, of some sort. I never really warmed to Bob Rozakis (or much of DC's writing pool at the time,) and Alex Saviuk was sort of my personal Paul Kupperburg of art.

Finally, there was another awesome The Brave and the Bold, #196. That title was a perfect gateway drug, with a generation's Batman writer & artist using him to introduce all manner of DC irregulars to new readers. So of course DC canceled it four issues later for a garbage X-Men knock-off, the loathsome Outsiders. My affection for this take on Ragman outlived that for Black Cat, probably because there still aren't many humanist slumland five & dime super-heroes running around. Turning him into a wimpy Spectre with a minority angle to trot out on Hanukkah was less than inspired. As with the Spider-Man, what sticks with me are images like Vietnam vet Rory Regan standing at a sink, unable to wash the blood off his hands, or his father's drunken group of friends being slowly electrocuted. The identity switches were novel, and Jim Aparo drew the Caped Crusader with an unparalleled grace. Bob Haney scripts were always a gas, but this one resonated in a way specific to a guy probably aware that his writing days were almost done, giving his all on the way out the door. That is a striking cover as well on a childhood favorite.

Posted by Diabolu Frank at 5:05 AM

I really enjoyed this post. Some nice insight into the mysterious origin of Frank! I applaud your memory. Amazing recall!

That cover with Ragman looks great! I'm only familiar with the post-Crisis Ragman (whom I like very much). Maybe I should seek out some pre-Crisis Ragman stories. Any recommendations (beyond obviously the issue pictured above)?

That's the thing about childhood memories-- you're impressionable, so a lasting impression is made. I read a '70s solo issue (#1?) of Ragman a decade back and the first issue of the early '90s mini-series when it came out, and barely recall anything about them. Then again, I read each once, whereas God only knows how many times I've tossed through that Batman team-up over the past 28 years. It's Bob Haney, who would have created Firestorm if nobody else had gotten around to it.

LOL about Bob Haney and Firestorm!