The top-secret story of the war that fighting men have only dared to whisper about-- explodes with the thunder of a blockbuster-- as Sgt. Rock of Easy Company, Sgt. Stuart of the "Haunted Tank", and Lt. Johnny Cloud, the Navajo Ace-- find themselves for the first time teamed against death in... SUICIDE MISSION! A Four-Part "Time Bomb" Novel!

Johnny Cloud was a tight-lipped Navajo warrior, so he was entrusted with a mission that could shorten World War II in favor of the allies. Even his fellow pilots couldn't know he was on a mission, instead working under the cover of a two-day pass. Cloud would take off from a wooded area with barely adequate take-off length that saw him brushing against tree limbs on the way up. Making it more worrisome, Cloud knew there was a bomb aboard his plane set to explode in the event of extremely rough conditions, to insure he died rather than be captured. Cloud wasn't even told his mission on the ground, having to tear open an envelope once he was in the air. It would have to wait, as German fighter planes were immediately on him. It took some maneuvering, but Cloud won the battle.

Learning that he was to pick up a valuable agent codenamed "Martin," Cloud are his information paperwork and followed a flare fired by an old man in a horse drawn wagon. The elderly Frenchman was the last survivor of the party who rescued "Martin," but wounds he sustained meant that he was not long for this world. Martin was hidden in some hay, and Johnny was surprised to find that the agent was also sealed in a suit of armor. "The Nazis captured me! And diabolically locked me inside thees heavy iron suit! So I could not escape! Or be recognized! Luckily, one of our girls working in the soup kitchen of Nazi H.Q. saw me when I was first brought in-- and notified my unit!" Cloud helped "Martin" to his plane, as the agent sobbed for his dead and dying comrades. 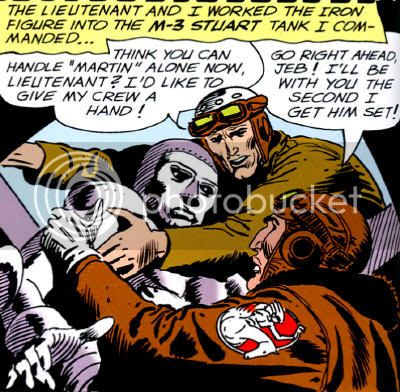 A Nazi tank rolled toward the allies. The old man drove his carriage into the enemy vessel, sacrificing himself to give Lt. Cloud time to get into the air. It was only then "Martin" revealed that their savior was Martin's father. More enemy planes set upon Cloud, and one was sure to down the Navajo Ace, until a friendly tank shot it out of the sky. Johnny was forced to make a rough landing, but blessedly, did not trigger the bomb in his plane. Sgt. Jeb Stuart had been alerted about "Martin," and his "Haunted Tank" was at their disposal.

Nazi tanks pursued Stuart's tank. One was destroyed by artillery fire, while the other brushed Johnny's booby trapped plane. Guided by the ghost of Confederate General J.E.B. Stuart, his descendant took out a final tank with a shot to an overhanging rock. However, as it turned out, this was not the rock J.E.B. meant to be the Haunted Tank's salvation.

Sgt. Rock eventually gathered his strength and walked on alone. Rock reached the Haunted Tank, which had sustained damage, so the occupants would have to be escorted on foot. There was no way they could reach safety dragging a suit of iron around, so after a bit of time under fire, dried out "Martin" from with. He was a she, Mlle. Marie of the French Resistance, already acquainted with Rock. Amusingly, the Nazi's had locked her in beret and all. 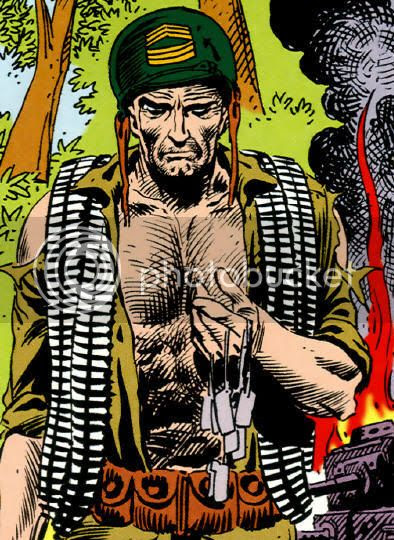 No longer encumbered, the group marched on, Sgt. Rock being instrumental in gunning down enemy troops on foot. An enemy tank was another thing altogether. Rock, Cloud and Stuart had previously ripped off their dog tags, so that when the tank commander demanded "Martin" give himself up, each declared himself Spartacus. Being a Nazi, the commander was plenty willing to kill them all, so Sgt. Rock made a break for it. Feigning injury from gunfire, Rock collapsed to the ground, then shoved a couple of bazooka rockets into the tank treads as they rolled by. The blast knocked Rock out, but did worse for the tank, and earned Joe a kiss. "The last thing I remember was a taste like no k-rations ever had.

Back at base, Mademoiselle Marie was decorated, while Captain Cloud and Lieutenant Stuart enjoyed their promotions. Marie kissed each on the cheek, but was met by a scowl as she reached Lt. Rock. "Don't call me Lieutenant! How can I face the combat-happy Joes of Easy Company as a brand new shavetail? I've got to figure out a way of gettin' demoted-- so I can be myself again-- Sgt. Rock of Easy!"

These three battle stars presented in a rare crossover of wartime heroes was brought to you by Robert Kanigher and Joe Kubert. It did a swell job of differentiating the different "flavors" of each lead's solo tales, but it's hard not to notice how much more visceral punch and personality Sgt. Rock had. One of the most compelling and best looking installments of this series!

For more blazing battle action to commemorate Veterans Day in these United States, scope the hashtag #WarComicsMonth on on Twitter and Google+!

Thank you so much for posting this Frank. A great team-up which I have not read -- definitely need to rectify that situation. And Mlle. Marie gets in there too! She had a great spotlight issue in the DC Veterans Day 5th week event recently.