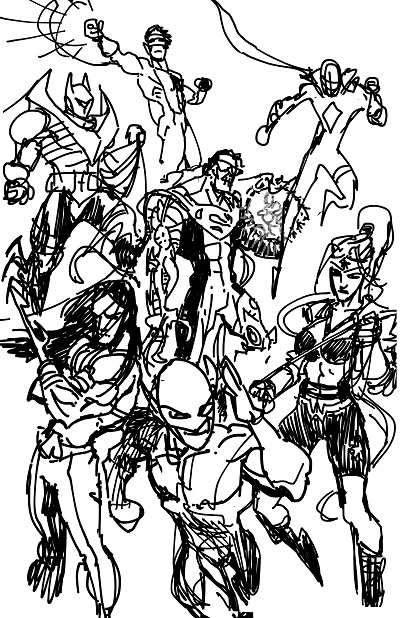 About a year ago, our friend Siskoid started a new podcast called Who's Editing, a thought experiment "in which Siskoid and his guest... open an issue of Who’s Who: The Definitive Directory of the DC Universe and imagine a line of books based solely (and obligatorily) on the heroes found within." I've been said guest on one occasion (with more to come;) coloring within the lines there and early on. However, after a few editions, I found the novelty of participating in the premise on a regular basis wearing off, as I wanted to play more with the continuity of the given characters, rather than focusing on the elevator pitch aspect. So my own personal comments-only side game, essential scrawling unwanted graffiti on the bathroom walls of Siskoid's forum, became less Who's Who and more DC Challenge. Basically, I slowly developed an overarching narrative for a theoretical ongoing line of books under my editorial stewardship, communicated through fake solicitation copy from a Previews-style order catalog, incorporating typically several variations on the concepts offered in each sequential issue of Who's Who. Unlike Who's Editing, it involves all the entry concepts, not just the heroes, and I put an emphasis on New 52/Rebirth continuity from the past decade, because that's my biggest DC Comics blind spot. It's way more interesting to research stuff that's unfamiliar, and to find ways of incorporating counterintuitive/unpopular elements. 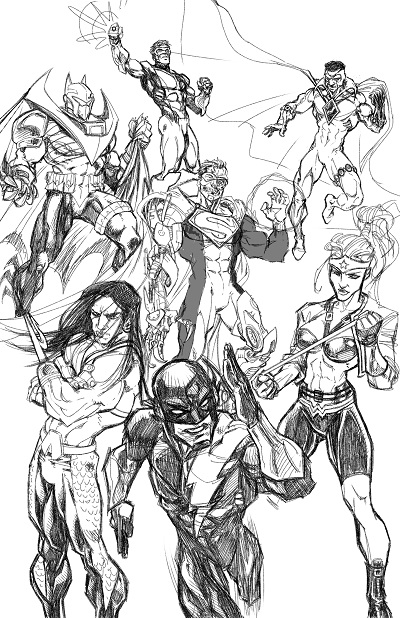 The Justice League edition, "Volume XII," was of particular interest to me. Part of the core premise for "my" universe was that the JLA had been killed in a Boom Tube incident during a major conflict between Apokolips and New Genesis. Since the demise of the League was the tipping point for all the circumstances in my meta-narrative, the arrival of a new League twelve volumes in would presumably be a big deal. In one of the few moments of planning well in advance, I knew that I wanted to deny a typical changing of the guard member rotation. The roster has been reshuffled so many times for real that doing it on something with no rules lacked ambition. I felt like you had to do something dynamic with the premise, as well. I didn't even want to have a book with the title of "Justice League." While I semi-backslid on both of those plans, with The Satellite League being a revival of the Bronze Age interpretation of the JLA, and feeling the need to expand on the '90s Extreme Justice title to include the word "League," but I'm still happy with the twists I have in mind. 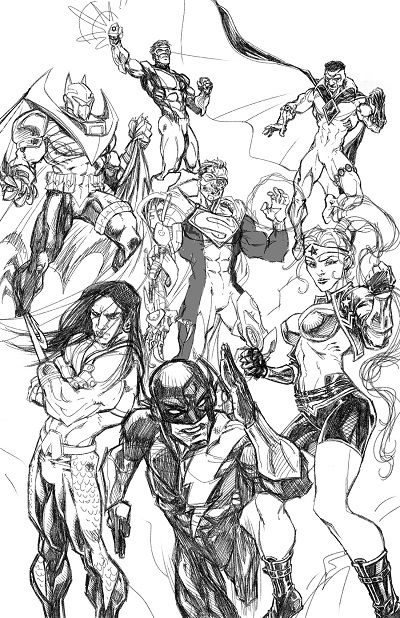 In the case of "Justice League Extreme," I hit on the notion that if I was going to replace the JLA, why not literally staff the team with infamous replacements of the classic League from "The Dark Age of Comics?" To my knowledge, it had never been done before, despite most of these temporary stand-ins being active around the same time in the early-to-mid nineties. That was actually the foreseeable problem, because many of these characters were tied to specific storylines and periods, often bearing temporary looks, rarely drawn by the same artists or together. I could copy and paste preexisting images into a Chromium Colorforms group shot, but in the hyperstylized EXTREME '90s they would obviously be visually at odds, unnaturally posed, and require tons of reference/paint work. Thanks to the pandemic, I haven't gotten many art commissions over the past two years, and thanks to my paranoia, I'd rather not have any shipped to my home by mail. I'd considered fully digital art in the past, and this seemed like a perfect opportunity to explore that avenue on a project where the lack of physical art would be beneficial. No way could I get a quality seven-figure drawing from one artist over a convention weekend for a reasonable price. In digital, with a reasonable time frame, at an agreeable per-negotiated rate, would be vastly preferable. 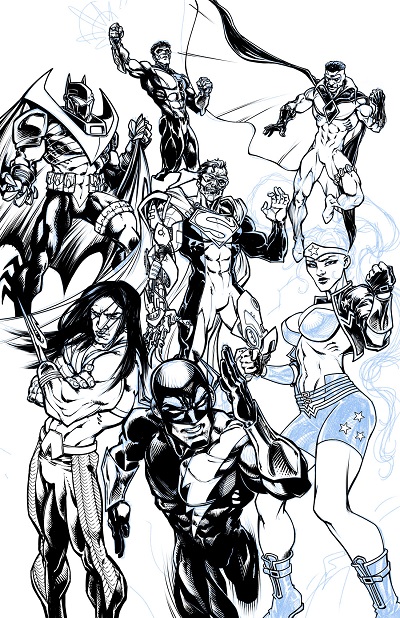 Unfortunately, being a jackass, I lollygagged for at least half a year between realizing what I wanted to do and actively pursuing it. Via an online service, I browsed through dozens of available artists, but the clear favorite for this project was Brad Green. Not to be cutting, but the only people still drawing in a "90's style" were either period superstars with outrageous quotes or, y'know, objectively bad at art. I wanted a modern (also good) artist who could evoke the excitement of the nineties and render all those (literally) edgy looks, but without turning it into a pastiche. I also wanted someone with the aesthetic of American super-hero work, who could juggle seven figures in kinetic poses that could look like a legitimate offering from a major publisher in 2021. Brad Green was my only choice that checked every single box, and the only artist I contacted, so I'm really glad that he was game. 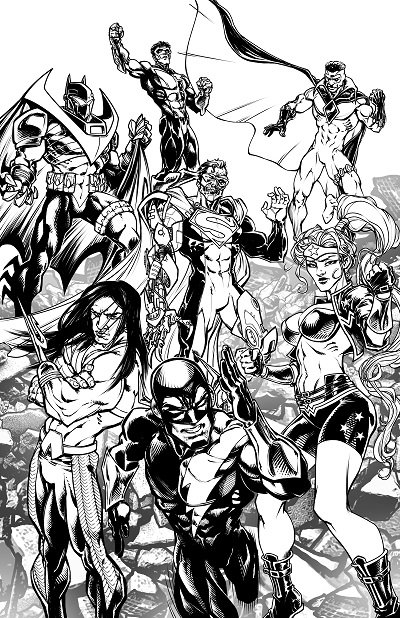 Among the four Supermen that arrived after "Doomsday," Steel had been a part of the Morrison/Porter JLA alongside the electric blue Superman, while The Eradicator was in the Outsiders. Cyborg Superman was revealed almost immediately to be evil, so the only team he ever joined was the Sinestro Corps. "The Metropolis Kid" grew into the Post-Crisis Superboy for over 100 solo issues and serving on numerous teen teams. Eradicator felt the most appropriate for the theme here, but I'd forgotten about the plan when I abused and disposed of him earlier on. It worked out though, because no one character could encompass "Reign of the Superman," so I now had an excuse to do a mash-up of most of them, with a New 52 spin to boot. "Do Eradicator but make him Cyborg" is a pretty lousy bit of art direction, but Green killed it with the mingled elements and the cool exagerated arm (then topped himself with the glowing energy effect.) 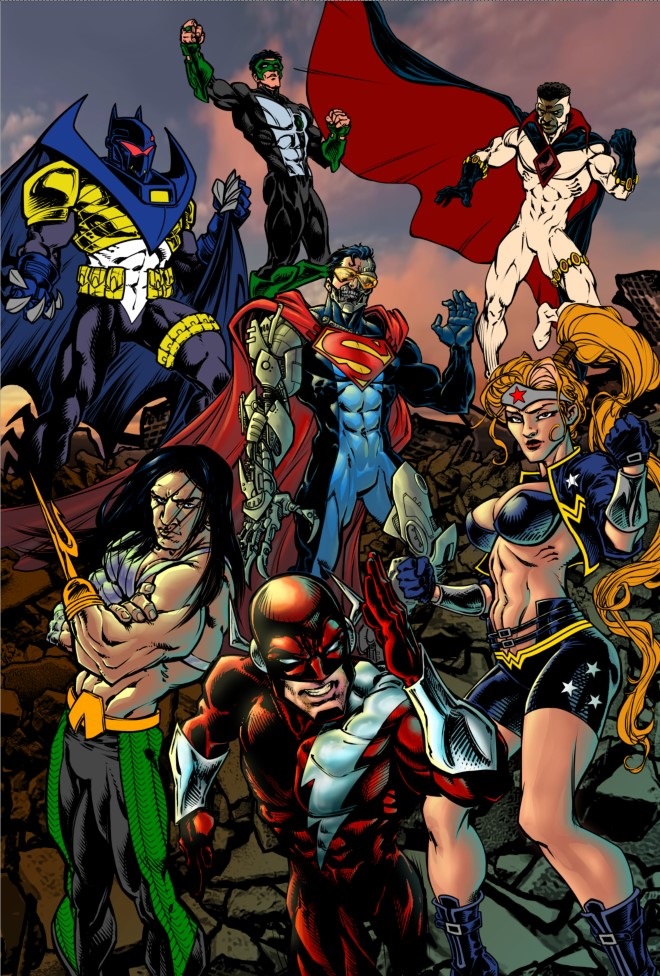 Green Lantern was the easiest choice for this piece. I could have reached from some obscurity out of the quarterly anthology, or brought back Warrior, but in truth Kyle Rayner was the most successful '90s replacement. He revitalized the franchise and was its champion for over a decade, until DC seemingly sabotaged him in pursuit of restoring Hal Jordan after thoroughly assassinating his character. While the subject of some fan debate, I personally love Rayner's original Darryl Banks design, but I understand that many hate it and find it hard to draw. Brad Green had no such issues, at least from my view of his results. Sadly, I'd forgotten about having written a first draft of the "Extreme Justice" copy with Kyle as the Omega Lantern, to acknowledge the modern White Lantern trajectory of the character. The design still sings, but more so with the green, and I was a jerk for asking Green to change the colors after he'd already done the flats. He still made it work though, and even added a neat energy effect. 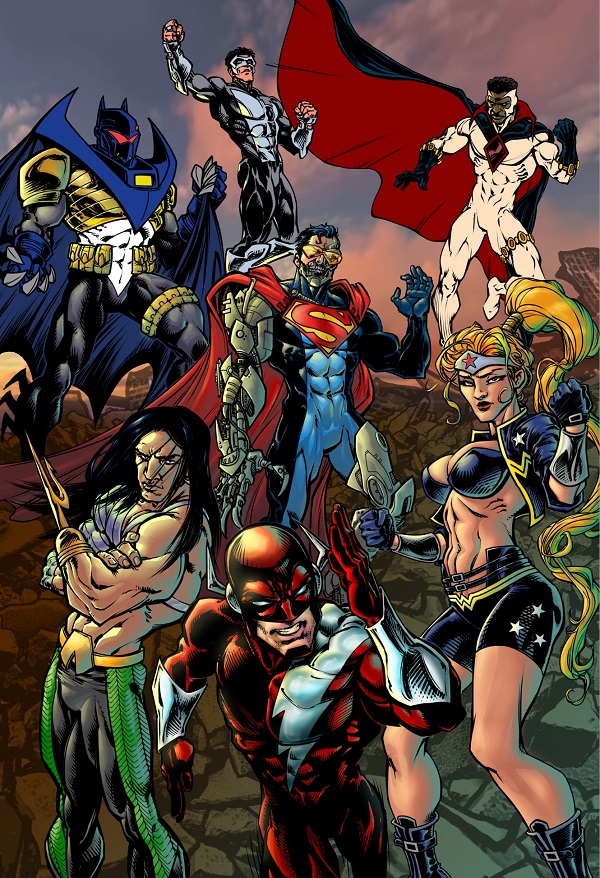 Dark Flash was the toughest choice for this piece. Wally West was the earliest replacement out of the gate, in the '80s, and was a conservative standard-bearer. Nothing much "extreme" about that. Wally had been replaced by Bart Allen, but that was a blip, and then again by Barry Allen, the guy he had himself replaced. All wore the same essential costume. I toyed with using minor future Flash John Fox, but his suit is hideous, and he was as much of an uninspiring reach as my other candidates. I finally landed on the short-lived grimdark alternate future Walter West, who at least looked good, though his stint had negligible impact in comparison to these near-contemporaries. Smartly, Brad Green focused a lot of attention on the Scarlet Speedster, from his foreground positioning in a "flashy" running pose to his determined expression and probably the heaviest concentration of rad crosshatching of any hero. Would could have been a (forgive me) also-ran is instead a highlight of the piece.

Brad Green could have stopped work at several points in this process and I would have been perfectly content with the result. There was a finished "pencils" stage with a lot of rough energy squiggles and loose cape outlines that already exceeded my best hopes going in. The figures were already extremely well balanced, detailed and numerous without feeling crowded or static. Green wasn't satisfied though, redrawning Artemis from scratch, one draft leaving her hair and costume details in blue-line sketch form. That one was then "inked" into a final draft with a digital background, and I was done. No further work needed. I'm happy. Another time, all the colors were flats and Kyle Rayner was still a Green Lantern. I still feel bad asking him to change that so late in the game, but he made it work regardless. We ran out of time and I tweeted and linked to a version that still had some flats as the version married to the "blurb" posting. Again, I was done, and said so, but the artist wasn't. He added more tones, muted the debris to emphasize the figures, added energy effects... he just kept at it until he had a piece that DC should be so lucky as to publish themselves. I hope he runs off some prints to sell at shows. I'd buy one even if I hadn't had a hand in its creation. These results are absolutely glorious, I'm bowled over by how excellently this turned out, and it was an absolute steal to boot. I'm so giddy with this piece that I want to do more in digital for this project. For variety, I'll probably try out some different artists and approaches, but I'll actively seek out more opportunities to work with Green again. I doubt I'll ever come up with anything else this demanding, but I don't need to in order to appreciate the pleasures of his style and careful craftsmanship. I can't recommend him highly enough for your own prospective commissions!

“Justice League Extreme #1” by Brad Green
Posted by Diabolu Frank at 1:48 AM

In the multiverse, there must exist this team as a book.