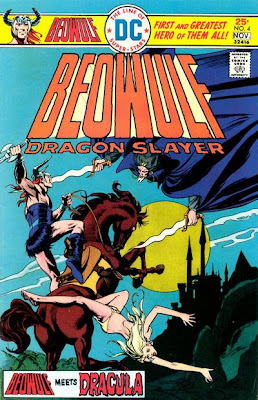 Every time I think I am out they pull me back in.

I keep thinking my time reviewing DC's 70's sword and sorcery books here at Bloodlines has ended but then something spurs me to review another issue.

Recently over at CBR, writer Tony Bedard discussed his plans for the new Beowulf comic. Here is the link to that interview, well worth reading in its entirety: http://www.comicbookresources.com/?page=article&id=39375 The earlier Beowulf series has been a guilty pleasure, a mix of insanity and violence. While I don't know if current standards will let Bedard capture that same zaniness, if it even approaches it then it will be worth it.

With a little more news about Beowulf out there for public consumption, I thought I would review Beowulf #4 which continues its tangential story-telling style. Writer Michael Uslan and artist Ricardo Villamonte continue to weave some of the actual story of Beowulf into a bizarre landscape of adventures. This issue is no exception.

One thing worth commenting on here is the cover stylings of the title. Each issue has had a predominantly solid background color but each has been an interesting choice. Issue one had a deep purple background with Beowulf fighting in the foreground, bring a royal feeling as well as that of a deep bruise. Issue one was a mix of electric red with blue contrasting Satan from the sky. Issue 3 had a brilliant scarlet behind a super-sized orange serpent. These bold colors really make the covers pop off the rack. This issue is a much more subdued blue but it works given this issue has a much more horrific and gloomy feel. 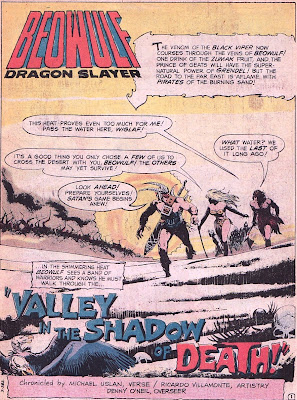 As I said, Uslan has Beowulf and his troops tromping all over the world, going from one extreme to the next, with no real continuity. So we leave last issue's tropical island setting (in which Beowulf killed the Black Viper) only to open up this issue in a barren desert. Where is their ship? How did they get here? Why are the here if the next piece of the puzzle is ambrosia from the Zumax fruit tree? You can't ask these question in Beowulf. You just have to roll with it!

Anyways, Beowulf and his troops find themselves being pursued by an army screaming that they will catch and kill 'Dracula the Impaler'. It is clearly a case of mistaken identity but the blood lust is hot in the pursuers and a battle ensues. 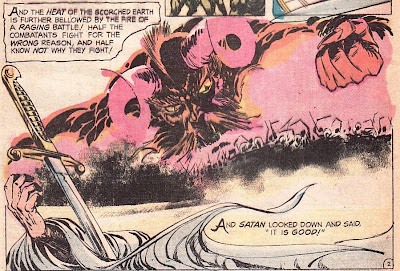 I have complimented Villamonte's art on Beowulf in past reviews and I have to continue now. The art is so breath-taking and the panel composition is so wonderful.

Here, we have a nameless corpse in the extreme foreground, so extreme we barely see any of him, just a sword buried into his body and a lifeless hand. Then in the background are the swarming armies. The combatants are barely humanoid, looking more like ants. And on the left it is simply a black smudge, almost a blood mist, obscuring even the inhuman hordes.

And leering over it gleefully is Satan and he says 'it is good'. This is why comic books are art. 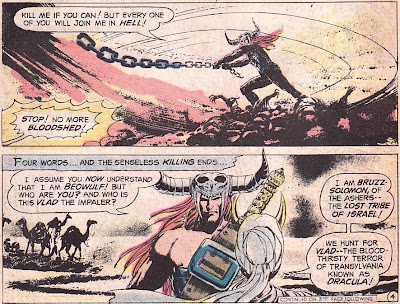 And yet there is more. I love the top panel for its perspective. Beowulf is simply swinging a length of chain, mowing down his opponents. He is practically standing on the piles of the dead. But the point of view and the number of links makes the reader know this is chain probably used to anchor a boat. And again those black smudges, the limbs of the dead reaching up as if trying to keep a hold on life, the lines of black dots mirroring the chain's path all adds to the gore.

Luckily, cooler heads prevail and the battle comes to a halt. The army attacking Beowulf are Israelites! The lost tribe, the wandering Ashers, have taken it upon themselves to end the scourge of Dracula. And they thought Beowulf was Vlad the Impaler.

Vlad is part of the Wallachian hordes and he not only has a penchant for impaling his enemies but slaking his thirst on their blood. 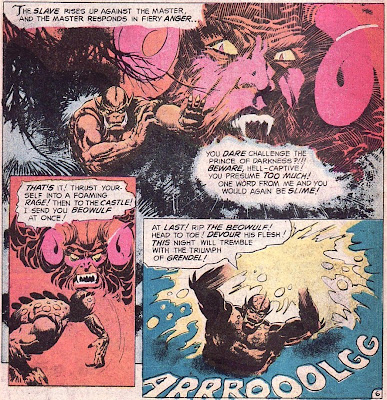 But wait ... isn't there a story involving Grendel?

As with last issue, Grendel (hinted to be the son of Satan in an earlier issue of this book) is furious that he hasn't had a chance to kill Beowulf because Satan has sent the Geat on a foolish quest. In fact, Grendel actually gives Satan an ultimatum. Either Beowulf shows up to fight Grendel soon or Grendel will descend into Hell and kill Satan. Satan decides to oblige telling Grendel to head to Hrothgar's mead hall and partake in some carnage.

Again, the over the top dialogue works here. 'Thrust yourself into a foaming rage!' But the panels and the colors are just fantastic. Again, the reds and pinks are striking. 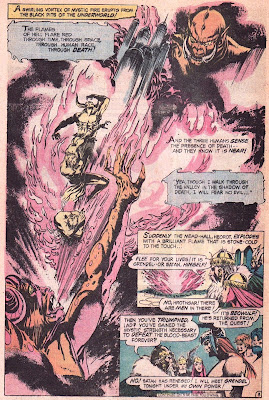 Meanwhile, in the desert, the campfire that Beowulf and his men sit around blazes mystically, opening a portal that Beowulf, Wiglaf, and Hondscio sucked through, landing in the mead hall once more.

Villamonte does a great job of showing how Beowulf is cast from one monster's grasp to another. It almost gives the impression that Beowulf is a toy, batted back and forth for Satan's amusement. Beautiful. 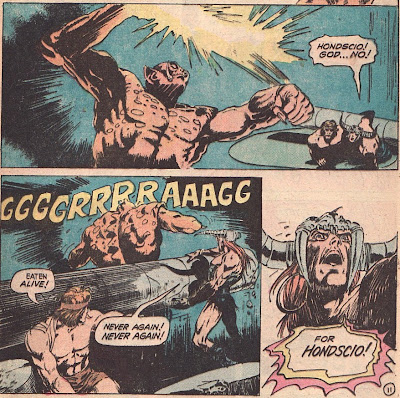 The Geats know that Satan wouldn't have sent them back to rest. A battle will happen. So each Geat picks a place of entry to the mead hall to protect. Poor Hondscio chose poorly as Grendel comes through the door and casually picks up the warrior and savagely eats him alive. Fantastic! It also mirrors some of the actual Beowulf saga as quoted below.

The head was the head neither of beast or man, yet had something of the features of both, and the great jaw was filled with blunt fangs that ground the bones of the unhappy Hondscio to pulp. Shaggy matted hair hung over the low forehead, and the eyes in the face of Grendel were the color of milk.

Horror-struck upon his couch, Beowulf felt his limbs in thrall and could move neither leg nor arm to raise himself as Grendel devoured the body of the young Hondscio.

I like that Beowulf is swinging one of the columns holding up the mead hall ceiling like a club. Just how tough is this guy! 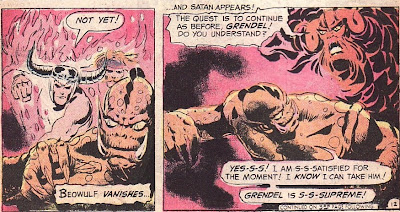 Who can understand the machinations of Satan though. Remember, he had sent Beowulf on a quest to gain the powers to defeat Grendel ... then he sends him into the clutches of Grendel ... only to pull him back again.

At least Grendel is satisfied. 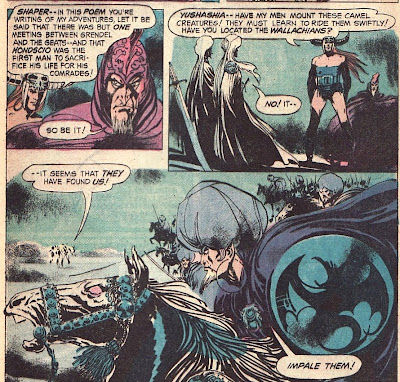 And Beowulf is back in the Israeli camp.

I know this is a nutty comic to be praising so much. But I love that Uslan tries to corroborate his stories with the actual saga. He tells 'the Shaper', the Bard chronicling Beowulf's tale, to write that there was but one skirmish between the Geats and Grendel (already in this book there have been two ... with more to come) and that Hondscio was the first to die in that fight  thus aligning the comic and the literary work.

Before there is time to rest and grieve, Dracula arrives with his Wallachian cavalry. Another melee erupts, staining the desert sand red with blood. 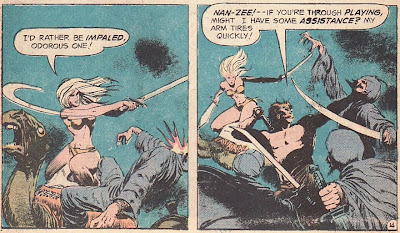 Nan-Zee continues to be a strong female character in this book. It is clear that she is an excellent warrior, superior to even some of Beowulf's men. They call on her to save them in battle often.

I think it is a sign of the addictive nature of this book that I have come to care for these characters. 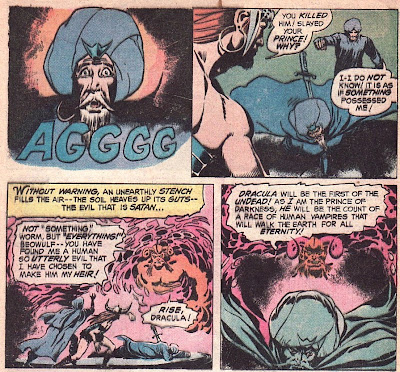 The Wallachians are skilled combatants. The Israelite leader Bruzz-Simon is killed in battle. Even Beowulf appears to be beaten as Dracula moves in to impale the Geat warrior. But if there is one thing I have learned in Beowulf, plots can take radical turns.

Dracula is slain, impaled by his own man! It is Satan's will. He had Dracula killed by his soldier so that Satan could resurrect him as his heir, the first of the undead. Again, the ghostly Satan, colored in pinks and reds, creates the eeriness needed for such a scene.

And just like that the book ends. Is Dracula teleported away? What of the rest of the Wallachian army? Who knows? The one rule of Beowulf is that you must accept what has happened and keep moving forward.

While not as psychedelic as Beowulf #3 (which so far is my favorite issue of the title), this issue continued the trend of gory battles, hallucinogenic mystic sequences, and labyrinthine plot twists.  I mean fighting Dracula would be enough of a mind-wipe to satisfy me. But throw in a wandering Israeli tribe. And include a side mission back in Hrothgar's mead hall? The reader barely has a chance to catch a breath.

Add to that Villamonte's slick art and pretty progressive panel layouts with dazzling colors and you have a solid issue of insanity. Beowulf may not be for everybody ... but it is like cotton candy to me.

Dear God, Spawn has nothing on the cape-tent of Dracula!

Beowulf swinging the chain atop a mound of wrenched arms was sick!

You know, the Israelites are prohibited by God from ingesting blood of any kind, (the actual purpose of kosher salt is to extract blood from meat.) So battling Dracula is a perfectly natural extension of that, taking into account that this book smoked future-crack.

"The flames of Hell flare red through time, through space, through human race, through death!" Combined with the art, you get a real sense of the magnitude of coming up from the underworld to slake a hunger for the pulped flesh of a horned warrior!

FOR HONDSCIO! W to the T to the F.

Wait, the human Vlad didn't drink blood, and nearly beat Beowulf before becoming a vampire? And none of this was enough to fill one issue, so Grendel got thrown in? I'm getting dizzy from this ride!

I think it is implied that Vlad drinks the blood of his fallen enemies.

I don't think words can state just how much I love this book for the sheer insanity of it.

It only lasted to issue six so I will forever be searching for the last 2 issues to complete the set.