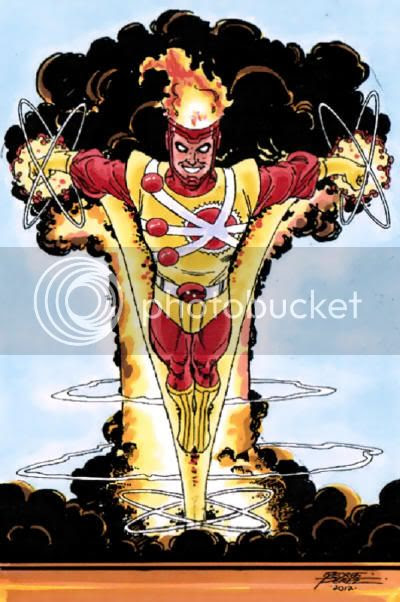 Aric Shapiro is a comic art collector with the good taste to pursue a series of Justice League of America member spotlight commissions in their full Satellite Era glory by George Pérez. An online acolyte of Pérez, Mitch Ballard, then colored some of the pieces with Shapiro's consent.

"Ronnie Raymond IS Firestorm. At least to me and those that grew up when I did. PPerhaps the most visuallly compelling charcater out there(puffy slleeves and all). Of all the pieces George did for me, this is the biggest trip down memory lane because I was hooked on Firestorm as a kid."

Pérez's uncolored original can be viewed here. Out of the many options in the gallery to spotlight, I chose Firestorm because I wanted a color piece to go with the rest of today's crossover, wasn't especially enthused about using icons like Superman on our po' DC zeros blog, and figured at least Shag would dig it. The composition is similar to the 1984 Firestorm Postcard by George Pérez, and they're both pretty happening.