The Irredeemable Shag did his usual bang-up up job taking snaps of all the costumed players at one of their biggest venues in the continental United States, Dragon*Con. This is evidenced by the hundreds and hundreds of pictures available in his flickr gallery, which he was kind enough to share with a host of his fellow bloggers. Aside from the Huntress seen above, and characters spotlighted at other blogs today, there weren't very many photographed who have been regularly featured here at DC Bloodlines. While Anj rends his garments and gnashes his teeth over the sorry Beowulf cosplay representation (told you ya should have covered Amethyst, bub,) I thought I'd offer up some odd commentary and feature a few of the least famous characters here. 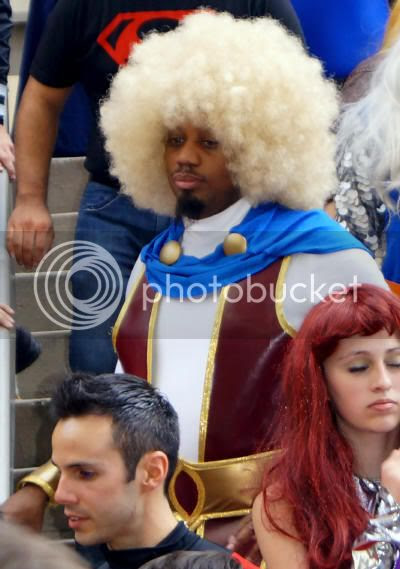 One of the really keen changes this year was the increased visibility of African-American cosplayers. This convention is in Atlanta, after all, so it's awesome to see folks like Static, XS, Lightning, Vixen, Cyborg, Green Lantern John Stewart, and Aqualad on the scene. More than that though, after recent criticisms in the industry media about a lack of color-blindedness among cosplay critics, there were tons of black fans taking on white heroic roles here. Obviously, Jericho above was at most half-serious with that enormous blond Afro, but there were plenty of Batmen, Catwomen, Supermen, and Wonder Women of color owning the roles of the most powerful and popular characters in comics. Gender-bending and the differently-able also embraced nerd Halloween with gusto, regardless of a canon DC themselves have thrown out the window. 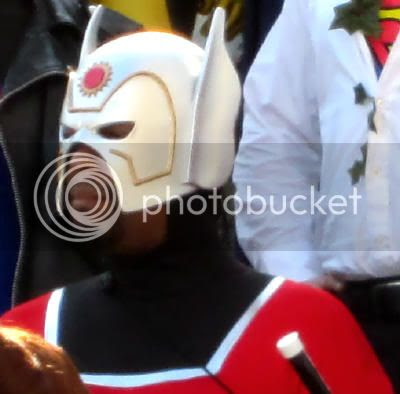 That said, DC Comics needs to give us Black Orion for real. I've long championed an African-American Captain Marvel, but Shazam! We got a little asshole white kid to replace the little nimrod white kid from the previous continuity, and the Big Red Cheese is still just Superman with static and a sleazy grin. Orion is the son of Darkseid, one of the most powerful entities in creation, and that suit is well complimented by the darker skin tone. I think fans would have a much easier time accepting a race change here than with many other characters, and a revived Fourth World would benefit from greater diversity than cringe-inducing '70s "progressive" notions. 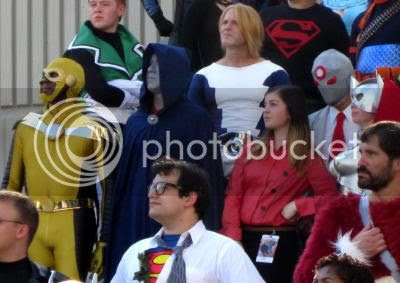 I fell hard for the T.H.U.N.D.E.R. Agents after reading the short-lived Deluxe series, followed by back issues of the cheeky Tower Comics. The properties, like Milestone and Red Circle, seem to be partitioned from the universe proper while still interacting timidly with it. Like a taxi driving one man Church of Scientology, the late John Carbonaro claimed to own the franchise and sued away any dissenters (of which there were many in the mid-80s.) I wonder if DC bought the property the way Todd McFarlane bought Miracleman, because aside from reprints and a modest stab at their own take, you don't see these guys integrating into the New 52. I don't think anyone with deep enough pockets to stare down DC lawyers will bother with a property disputably in the public domain if DC never does boffo business with them, so it's almost like the Agents were purchased for storage like Marvel's Ultraverse. Anyhow, notice that Dynamo, NoMan, Lightning, Menthor, and the villainous Iron Maiden have their little team clique off to the side of the photo. Freudian?

Finally, we have Bumblebee, who never did much for me as the Wasp of the Titans. I liked her as a more tragic figure in the Doom Patrol, but the main reason to close out with this pic is that the cosplayer is just so damned cute! Dig the specs! Not all the commentary has to be heavy. Thanks to Shag for the pics, and to the Superhero Costuming Forum for setting up these photo shoots every year!

Posted by Diabolu Frank at 1:00 AM

Really great pictures , thanks very much for your sharing