Doomsday was rampaging, and Mr. Majestic vouched for the man this "Superman" was supposed to be, so the pair flew off to help Apollo and Midnighter.

In Tranquility, Oregon, a whole host of DC super-villains fought the assembled heroes. Among them were the Golden Age Cheetah, Mano, Blockbuster, Solomon Grundy, Captain Cold and the Royal Flush Gang. Golden Age Flash Jay Garrick convinced a skeptical and justifiably hostile Grifter that the assembled heroes needed a field commander with military experience. "We're outnumbered and on the defensive. That's how these things are lost... Tactics, son. Organization. Looks like you're just the man for the job..."

In Siberia, Stormwatch and the Legion of Super-Heroes battled Validus and the Thunderers of Qward.

Back in Larkin, Arkansas, Midnighter let the Superman tackle Doomsday while he ran into the trailer in hopes of gutting the sleeping Chimera and ending this mess. He was halted by an armed Joker. "Batman Lite, I presume."

WildC.A.T.s headquarters was being torn apart by Giganta, with help from Dr. Light, the Iron Age Cheetah, the Weather Wizard, Firefly, Charaxes, Dreamslayer and more. Martian Manhunter, Jack Hawksmoor and Zealot emerged from a door to help.

The Aegean was dominated by Starro the Conquerer, whose possession of various Amazons, Coda warriors and followers of Kobra troubled Wonder Woman and Wetworks. One had trouble with the term "Super-villains?! And said with a straight face?" Diana replied, "I'm glad you find this so amusing." The Amazing Amazon was just about to take the battle directly to Starro when it fell from the sky dead from indigestion related to a Wildstorm character. 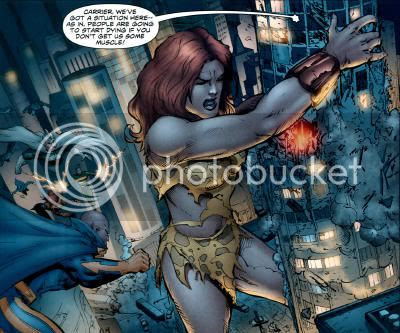 The Carrier continued traveling the Bleed and observing the situations from afar. The Doctor explained to Jenny Quarx that Chimera hadn't recognized the intrinsic heroism of his first constructs, and was retaliating against their betrayal of his goals with the second batch. The Doctor could affect Chimera on his home turf, so other avenues had to be pursued.

In Tranquility, the Flash helped relay Grifter's orders to the troops. Vampires joined the other warriors in the Aegean, who easily routed Kobra to secure the Aegean. Siberia was still in play overnight, as the Legion refused to use lethal force, which gave Stormwatch fits. Cyborg managed to talk down the New Teen Titans and Gen13, but not before the Atom was confirmed as "squished." The Halo Corporate headquarters was wrecked, with casualties in the triple digits. Martian Manhunter was shown confronting Charaxes.

In Arkansas, Midnighter dodged gunfire until Apollo blasted the Clown Prince of Crime in half with eyebeams. Unfortunately, Superman prevented the killing of Chimera, giving him time to find an even more dangerous threat from out of his volume from the Athenaeum...