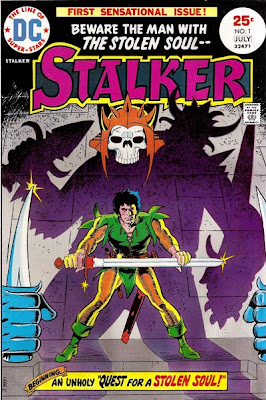 Hello everyone. It's Anj from  Supergirl Comic Box Commentary. When Diabolu Frank set up this blog and  asked me to join, I was honored. I am a long-time DC fan, a true fanatic for over 3 decades, and loved the idea of having a place where I could occasionally post a review of a non-Super book as well as discuss some of the dustier parts of the DCU. I don't post here as much as I would like to but I thank Frank for giving me a place to go when struck by the muse.

But a review of Stalker #1? I don't know if it can get dustier than that. So why this post?

Stalker, as well as Beowulf, and Claw the Unconquered, and Tor, and Tarzan were fantasy books that DC put out in the mid-70s. I wasn't reading comics back then but I have bought enough comics from that time period to know the characters by name just from the ads within the issues. And, as odd as it sounds, I always thought that 70s DC fantasy was sort of a hole in my knowledge. None of these books lasted a long time but they certainly had tremendous talent associated with them. Tor was written and drawn by legend Joe Kubert. Claw the Unconquered was written by Dave Michilinie with art by Ernie Chua and later Keith Giffen (some of Giffen's earliest work). And Stalker was written by then neophyte Paul Levitz and drawn by mega-legends Steve Ditko and Wally Wood!

I put the idea of looking for these issues in the back of my head and frankly it got lost in the old mental warehouse. 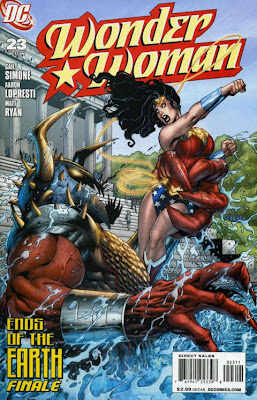 In 2008, Gail Simone was in the midst of an underappreciated run on Wonder Woman. One of the arcs ran from Wonder Woman #20-23, a 4 issue story called 'Ends of the Earth' in which Diana teams up with Stalker, Beowulf, and Claw the Unconquered to battle Dgrth, the demon god from Stalker.

It was a great arc, showing Diana as a warrior with compassion. It was very interesting to see her interact with these characters - the noble Beowulf, the cursed Stalker, the angry Claw. And it allowed Simone the opportunity to also delve into those 70s stories. After I read the story, I remembered my prior idea of investigating these stories in their original series. 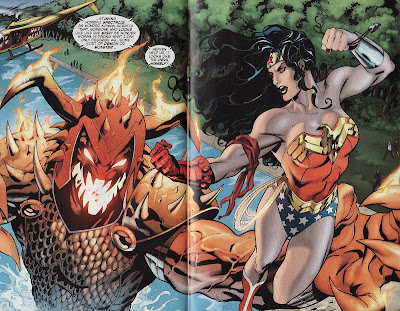 The story ends with a great battle between Wonder Woman and Dgrth in Washington D.C. It ends quickly ... maybe too quickly ... but it is fantastic.

And I have said it many times before, Aaron Lopresti might be the perfect Wonder Woman artist for me. His Diana is everything she should be strong and beautiful, powerful and regal. Lopresti just rocked on this book.

And in this arc, he gets to draw Diana in a variety of battle outfits, variations of her costume for the more medieval settings of  northlands, deserts, and jungles. With such varying settings, Lopresti really gets to stretch his legs.

But that arc came out in 2008. Despite rekindling my interest in those fantasy comics, it wasn't until a recent convention that it finally came to fruition ... at least a little. As I was leaving the Boston Comic-Con, I walked past a dealer with a box marked '70s DC books, $1'. How could I not thumb through the box? And there I discovered, in near mint condition, Stalker #1 and 2, and Beowulf #1. Just a great purchase.

I have to say, I expected this to be a clunky read but was surprised at how good the first issue was.

Levitz gets us right into the action, the first several pages shows Stalker working his way into a well guarded castle, defeating palace guards, and the throwing a dagger at the castle's Queen, the blade embedding itself into the throne right next to the Queen's face.

We have really no idea who these characters are or what the motivations are behind Stalker's assault. But it certainly grabbed me.

I also liked the opening little blurb above. The idea of a 'nameless' hero always intrigues me like in the some of the best Clint Eastwood westerns.

And I thought this was just a great hook for the series. There was a note on the dagger. Stalker writes of being wronged by the Queen and taking his revenge by killing her a year and a day later. 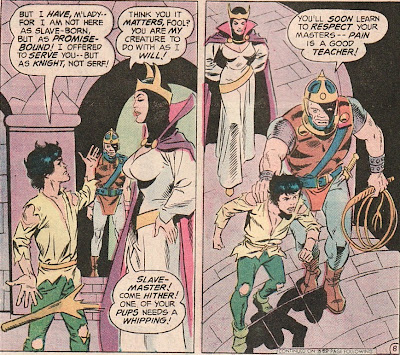 It turns out that Stalker has some history with the Queen. Living in abject poverty, the nameless boy who would become Stalker runs up to the Queen one day and begs to join her court, to become a knight and soldier in her army. The Queen 'accepts' the boy's request but instead puts him to work as a slave inside the palace, scrubbing floors and hauling trash.

Years later, the boy shows his courage and confronts the Queen saying he wished to be a knight, not a slave. The evil Queen orders him to be flogged. But before the beatings can happen, the now young man escapes and wanders into the land, coming across a temple devoted to the demon god of warriors, Dgrth. 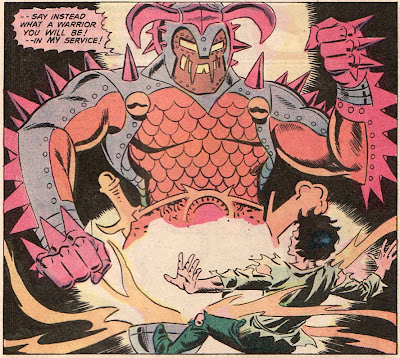 Wishing to become a warrior, the nameless young man prays to Drgth who appears to him.

Dgrth promises to give the boy all the gifts he would need for a new life ... expertise in all forms of combat, unerring marksmanship, the ability to follow any trail while leaving no trace. And he would give him a name ... Stalker. But all these gifts had a price. 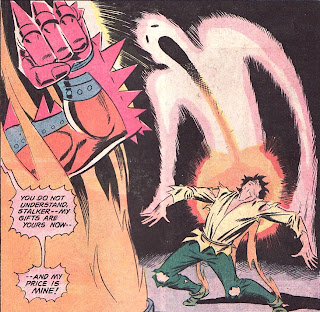 Stalker must hunt those Dgrth asks him too. And he has to give Dgrth his soul as payment.

I will talk about Steve Ditko later, but I love this panel. Look at how Stalker looks like a marionette whose strings have been cut while his soul shrieks as it is pulled free. Fantastic.

And just like that, Stalker becomes a soulless warrior.

His first act with his new skills is to return to the palace and leave the Queen that note. And while there, Stalker kills the man who tried to beat him earlier.

However, the victories and revenge isn't as sweet as Stalker thought it would be. His lack of soul makes any positive emotion unavailable. He feels no joy ... no relief. Suddenly this deal doesn't sound as good as it did. 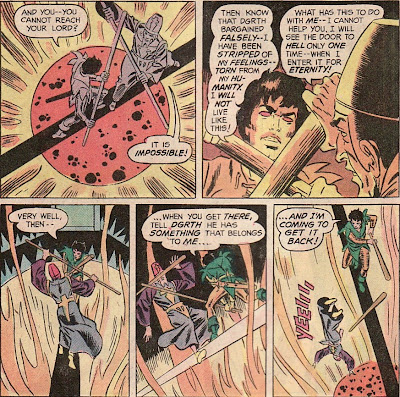 Stalker returns to a Dgrth temple hoping to rescind the deal. Unfortunately, Dgrth isn't there, only a faithful priest. Determined to regain his soul, Stalker kills the priest, hurling him into a fire pit.

Again, another great scene here as Ditko changes the point of view, moving the angle from above the battle, to parrallel, to below the battle, to back above. That adds some energy to the scene, especially that last panel as we sense the height the priest is plummeting down.

The issue ends with Stalker vowing to find Dgrth and regain his soul.

Boy, there is a lot of story in that one issue. It is amazing just how much was in those issues. This story would probably be a 6 issue opening arc these days. More importantly, it did just what a first issue should do for me ... gave me some back story, and gave me a great hook to come back, the parallel stories of Stalker's quest for his soul as well as his quest for revenge against the Queen.

Levitz does a good job here with dialogue, letting us feel Stalker's emotions as he moves from pauper to slave to soulless warrior.

I could write many posts gushing about Steve Ditko's work. I can't afford early Ditko, so this 'middle' Ditko will have to do. He clearly has a great sense for panel composition, using close ups, wide shots, and points of view to add to the story. I see mostly Ditko here. But Wally Wood is another legend. I can't believe the two of them worked on this together.

I tend to read these Silver Age issues with a different critical sense. I tend to be kinder when it comes to overlooking some of the sillier aspects. But truth is, I would probably read this book if it came out today. I really thought the story and the ongoing plotlines were interesting. This was definitely ... definitely ... worth $1.

Once again Anj, you totally "get" the blog by digging into the obscurities at the fringes of the DC Universe. Plus, I love it when you go to places I've never really been myself, like these fantasy titles.

Okay, so Conan came out at Marvel in late 1970, and at least part of its success was the dynamic new art of Barry Smith. Two years in, the more veteran John Buscema took over, but his passion for the project was evident in its superior quality, and sales rose further. I mention this because DC seemed to be trying to jump on Marvel's bandwagon, but their route was kind of screwy.

The only one of these books I had as a kid was Stalker, but I'll save my nostalgia for your second review. What strikes me about the book is how much closer the characters' designs and settings are to Prince Valiant over Conan, plus the day-glo costumes that seemed to interpret Foster by way of Kirby. Wood over Ditko is one of the most bizarre combinations of talent in memory, with something like fifty years of combined experience by 1975.

Looking from the outside, Tor seemed to only have savagery and loinclothes in common with Conan. With Joe Kubert's career going back to the Golden Age and his prior work on the somewhat more similar Tarzan, there wasn't much sense of freshness there.

I don't think I've even touched an issue of Beowulf, but from descriptions it sounds like the Atlas/Seaboard book that got away (and lasted six issues instead of two!)

I don't ever recall reading a single Claw the Unconquered, but the talent and style of that book seems to have come the closest to the Conan standard. I guess it was killed by the DC Implosion, but it would have been interesting to see where it would have gone otherwise, especially since Giffen was very reminiscent of Smith, and Ernie Chan drew his weight in Savage Sword.

While this was an oddball lot, I'm glad DC stuck with fantasy long enough for The Warlord to hit it big. That book was a forgotten titan, DC bestselling title at one point, and another book I have fond childhood memories of.

Anyway, I regret rambling on with this ancillary stuff, because I enjoyed your review a lot, and want to talk about that, too. Next time for sure...

Stalker is a fantastic little title. Thing really get bizarre in the last issue as Stalker goes after Dgrth including a battle in the underworld. Definitely a title I want to pick up at some point.

Regarding Beowulf, Dragon Slayer. I LOVE THIS COMIC. Like seriously. I mean, like SERIOUSLY. This is the single most insane sword and sorcery comic I have ever read, and I have read a few of them in my years. I wish that both of these titles had caught on along with Warlord, because the awesomeness they would have achieved fills me with all sorts of zany ideas.

Thanks for the comments! This was a lot of fun for me to write. And there is more to come!

I couldn't remember where I'd read about Beowulf's insanity, and now I know Luke was to blame!