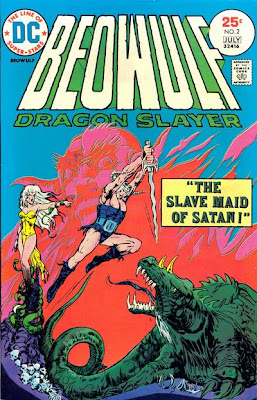 Hi again, Anj from Supergirl Comic Box Commentary  here, once more taking over DC Bloodlines to review some of DC's 1970s fantasy comics. I hope you have it in you to bear with one more look. I have already reviewed Stalker #1 and #2 as well as Beowulf #1 here. It was pure serendipity that put Beowulf #2 in my hands just 2 weeks ago, a find in the bargain box at my local comic book store.

As I said when reviewing the first issue, had I read this issue as a very young boy, it would have been imprinted on my brain. Crazy battles, beautiful women, and a noble savage hero? What more could an impressionable young boy ask for? The truth is this sense of nostalgia, knowing how a young Anj would have devoured this book, makes me look at it with a more gentle critique.  And this issue is so crazy I sort of chuckled my way through it. It is definitely 'over the top' and sometimes that works, like it did here.

But moreover, this comic is such a nonstop roller coaster ride of the most wild fantasy concepts. Writer Michael Uslan isn't rewriting Beowulf here; he is absolutely going crazy here taking the hero to bizarre and unexpected places. It is just crazy enough to make me want to find the other issues of this run (6 in total). And Ricardo Villamonte stretches his legs a bit here as the landscape varies. Yes, he has a more classic photorealistic illustration style. But he also gets the chance to get a little wild as Uslan's scripts drift far away from the original Beowulf text. 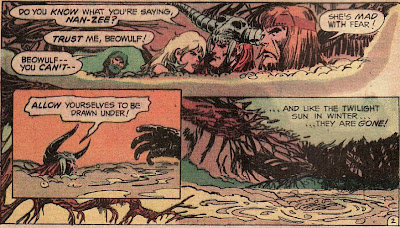 Remember that last issue ended with Beowulf on his way to Castle Hrothgar when his foil Unferth used black magic to send Beowulf and his men to a swamp loaded with satanic crocodile men.

Sinking in the muck, Nan-Zee the comely Scyfling warrior that Beowulf freed from Satan's control last issue, advises the warriors to not fight the sand, instead allowing it to engulf them. It seems a little quick for Beowulf to be listening to her like this, but he must sense she knows what she is doing. And just like that Beowulf and his men sink into the mire. 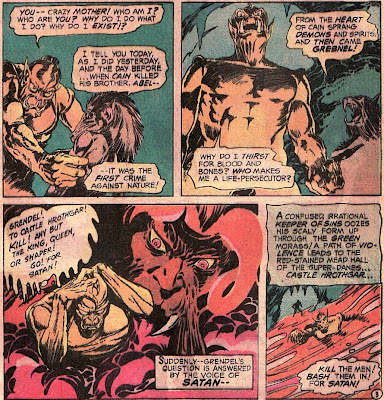 In the meantime, we find that Grendel is suffering some angst as he tries to figure out just who he is. Of course in the Beowulf, Grendel is simply a cannibalistic monster, a spawn of Cain. To have him trying to come to grips with who he is was an interesting way to go. It seems daily Grendel asks his mother why he is who he is. Daily? Can I say 'poor Grendel'? Maybe he wants to be something more than killer.

But before he can even come to grips with these thoughts, before he can say he wants to be something else, Satan himself invades Grendel's mind, telling him to again go to Castle Hrothgar and kill the Danes.

I don't want to say this makes Grendel a sympathetic character, but it certainly gives him some strange depth. 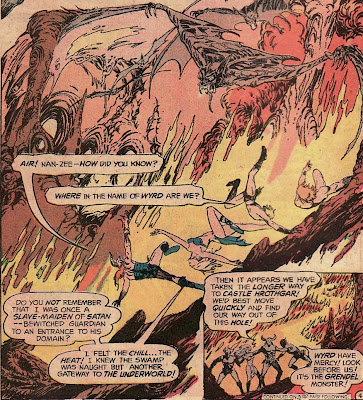 For those thinking that Beowulf was simply going to drown in the swamp, you haven't read many comics. Much like the 'siren nest' in Beowulf #1, the swamp was actually a doorway directly into hell. Nan-Zee recognized this from her years as a 'slave maiden of Satan'. Now why you would want to actually go to Hell rather than try to get out of the swamp is a different question. I know I would rather get back on terra firma and fight croc-men than battle my way out of the underworld.

So the straight path to Castle Hrothgar has taken a detour. 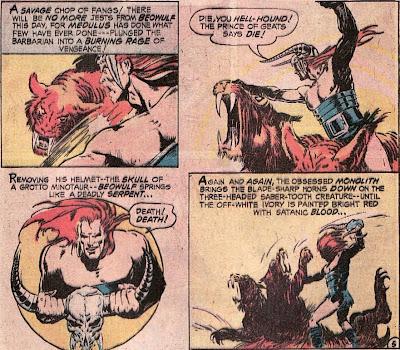 And here is one of the more memorable moments in the book for me, one I am sure I would have loved as a kid.

Facing Medulus, a three-headed Hell hound, Beowulf loses all sense of nobility and some might say humanity. He becomes a pure instrument of savagery, filled with a 'burning rage of vengeance'. He bludgeons and gores the hound to death with his horned helmet, the skull of a minotaur, until its 'off-white ivory is painted bright red with satanic blood'.

I mean, look at that third panel, Beowulf chanting 'death' as he grips the helmet. Yes, if an old Anj is pleased a very young Anj would be very pleased. That is twisted, awesome, and somehow cleared by the Comic Code Authority.

In the aftermath of that battle, with Beowulf talking about how they cannot rest a moment, how they must be as vicious as their demonic opponents, Nan-Zee decides to get amorous. Yes, she will teach him how 'softness' now and then is a good thing. Looks like there is a place for some pleasure and passion in this den of evil.

Nice little art tricks here, their bodies in complete silhouette. And all that sort of action is off-screen, much like in Conan books. 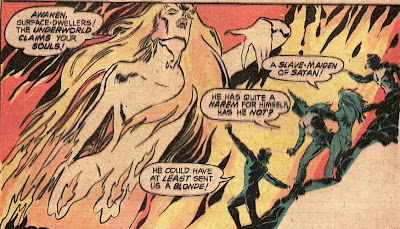 The team meets yet another 'slave maiden of Satan', this time a giant fire woman, naked but for some well placed licks of flames.

The men's responses are hilarious. Beowulf sounds jealous of his harem (knowing Nan-Zee was once there). Meanwhile one man wants a blond. Umm ... she's 40ft tall and made of fire and wants to kill you! Maybe you shouldn't be cat-calling!

Regardless of the tomfoolery, she is tough to beat, being red hot and all. Only Nan-Zee knows the answer; the demon's power lies in her hair. After a quick coif by Nan-Zee, the demon needs to retreat. And that retreat leads the team deeper into Hell.

Again, I would have been giddy about this as a kid. 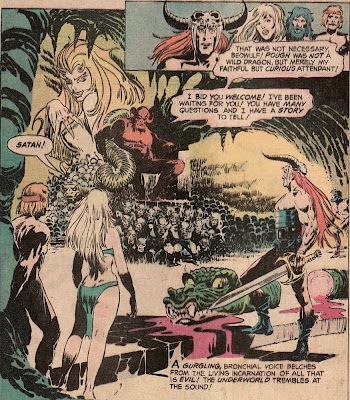 After beheading a dragon, the group walks into Hell's throne room and have a conversation with Satan himself. They are talking to Satan!

Okay, that is pretty sick. I like the throne. It is either resting on the backs of slaves, a pile of skulls, or both.

Satan then goes on to talk of how he is bored in Hell and needs amusements to pass the time. And when he heard the happy noises from Castle Hrothgar, he sent Grendel there to end the party. He doesn't come right out and say he is Grendel's father but he does say (and I quote) that he "... er, knew his (Grendel's) mother once." 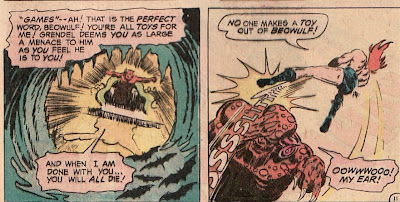 And in another loony moment, Beowulf gets sick of being called a 'toy' for Satan's amusement and actually assaults the Devil, cutting off Satan's ear.

That is crazy. And wonderful. And inspired. 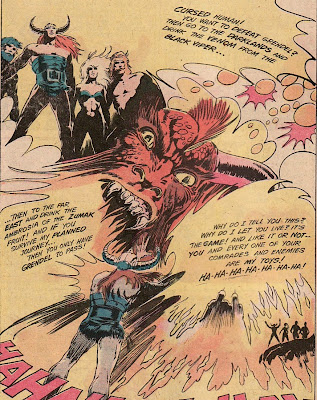 That angers Satan. But rather than kill Beowulf and his men, the Devil lets the warriors go, transporting them to Hrothgar's land. But he gives them a quest, a Satanic game for them to play. Beowulf must drink the ambrosia of the zumak fruit  and then drink the venom of the black viper. Only then can he defeat Grendel. If Beowulf does not complete these quests, Grendel will continue to kill with impunity.

Back at Castle Hrothgar, Grendel goes on his second rampage. I wish I could explain it but these were my favorite panels of the book. Grendel just effortlessly tosses this Dane out the high tower window. This is another example of a part of this book that I would have dwelt on in my childhood. That is just horrific.

Grendel does ask Hrothgar if this man is his 'favorite'. I suppose it could be the comic equivalent of Aeschere the trusted advisor of Hrothgar killed in the Beowulf poem. But Aeschere is killed by Grendel's mother in that work.

Beowulf arrives at the castle, transported there by Satan. Grendel contemplates attacking but he is held in check by Satan who wants the Geat to go on this quest for venom and ambrosia. The quest could bring Satan more amusement than a battle right then would. 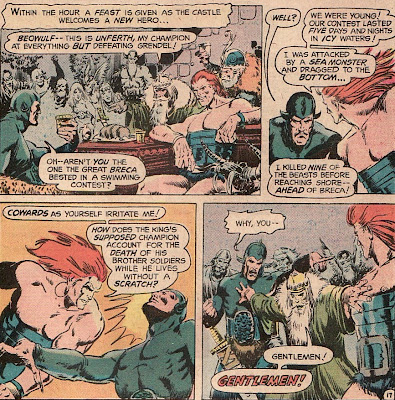 At some point, Uslan must have realized that he wanted to insert some parts of the actual poem's story. We see a brief retelling of Beowulf and Unferth's confrontation over his swimming contest with Breca as the characters lounge in the Mead Hall. It actually mirrors the poem nicely and briefly, even Beowulf's rebuke of Unferth's unsavory battle survival skills.

In some ways this is also inane. What could Beowulf be thinking? "Hmmm, just a couple of hours ago Grendel tossed some guys out of windows while I was cutting Satan's ears off. I know ... let's chill out and get drunk!" I think I would want all my faculties available and be on guard at all times.

The decision gets made to head out on Satan's quest. Grendel must be defeated. And Hrothgar makes Unferth join Beowulf's team. In the poem, Unferth ends up respecting Beowulf, giving the Geat his family sword Hrunting. So maybe Uslan wants to show how the two end up becoming comrades in arms.

Okay, as I said before, this comic was a complete guilty pleasure which made me feel like I was 9 years old again, reading comics until the covers came off. It is filled with all the things that make fantasy books great. But add to that the nuttiness like squaring off against Satan and I knew this was a winner. I was so giddy reading it, I have to give it a high grade. It's like saying I enjoyed the movie '300' ... it isn't an Oscar winner, but it was a flat-out awesome time.

And I'm not the only blogger here at DC Bloodlines that liked the book. Here is Luke's review of the whole series, which sounds like it gets ever crazier. From  El Jacone's Comic Book Bunker:http://ljaconesbunker.blogspot.com/2008/07/discount-bin-finds-beowulf-dragon.html

These comics should come with a Dio soundtrack. It even reads lyrically. "Kill the men! Bash them in! Maiden for Satan!" I'm confident this is the greatest and most textually rich delivery of the line "You-- crazy mother!" Existential Grendel would be another awesome song title. Plus, Satan himself goes all Robert Plant with that "oooowwwwwoooo!" Awesomely ridiculous Anj! Thanks for indulging us!

Also, you don't cut off Satan's ear without the energy and drive that comes from drunken rage. Mead is Beowulf's spinach!

As much as I want to mock the girdle, armoring the vital organs while retaining free appendages and reduced weight is kind of brilliant.

It was too much fun to just sit in my long boxes, so I was more than happy to showcase this issue.

I like the idea of heavy metal playing in the background here. Or maybe something more psychadelic given the warped events!