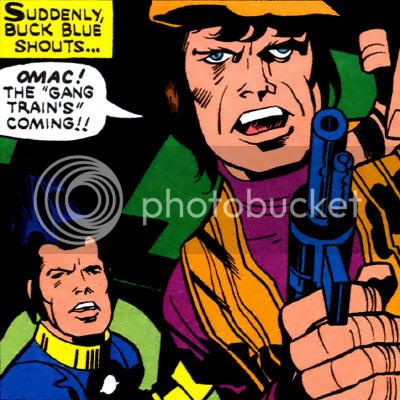 HISTORY
Buck Blue was a mugger who kidnapped people to turn over to the Crime Cabal. Blue was captured at a video arcade by OMAC, and forced to lead him to "the Terminal," where the kidnap victims were sold as surrogate bodies to the highest bidder. Unbeknownst to Buck Blue, his own girlfriend was taken by Fancy Freddy Sparga for use by the Godmother. Buck Blue was outraged at the offense at first, but was tempted to look the other way for a substantial fee. OMAC took the decision out of Buck Blue's hands, pressing him to lead a trek through abandoned subway tunnels against mutated guards and heavily armed resistance from the Crime Cabal. Finally, the pair smashed their way to the Terminal, where Buck Blue turned on OMAC. However, a Peace Agent disarmed Blue, and his girlfriend was liberated. Buck Blue was then taken into custody by the Global Peace Agency.

POWERS & WEAPONS:
Buck Blue could handle a firearm, as available.

Quote:
"I can use this bird's heater."

Created by: Jack Kirby
Posted by Diabolu Frank at 12:00 AM

Labels: OMAC, Who's Dat: The Codicil Directory of the DC Residuum