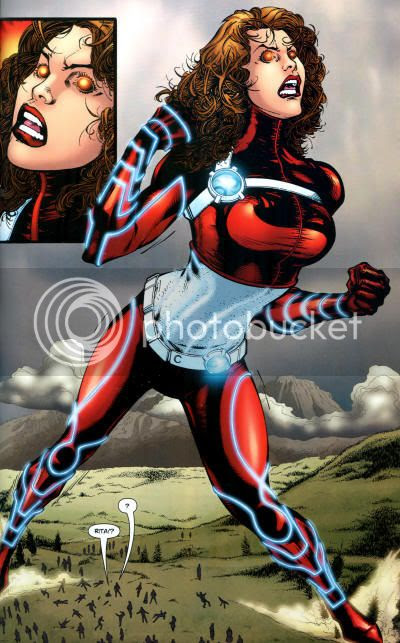 Brandenburg, Germany was coated in the ashes of people burnt out by contact with the singularity. Robotman used his G.P.S. and wireless connection to determine the singularity was on its way to Cottbus, population over a hundred thousand, and just 125 km outside Berlin. While the Doom Patrol had been left alone, they couldn't risk Dusty's life with a chopper ride, so Elasti-Girl walked the team across der Deutschland.

On Oolong Island, the Chief called Steve Dayton in for an intense meeting. "Your marriage to Rita was, to put it mildly, a debacle. Adopting Gar Logan was the only positive to come out of the union, and a questionable positive at that... Rita needed a semblance of normalcy. A mind-reading husband and a shape-shifting son does not constitute normalcy... Lurking in her head liked a cerebral stalker, ready to satisfy any desire as soon as that desire was given thought." Niles Caulder knew Mento had continued to psychically stalk Elasti-Girl, and used that knowledge to his advantage.

Robotman couldn't help but notice a stranded motorist who was the least bit bothered by a giant woman "lopin' along." Sure enough, it was the singularity, wondering why humans needed so many different forms of an internal combustion engine. Cliff tased him, and the body turned to ash. Thanks to his addiction to video games, Larry was able to explain that the electrical charge "shorted" the victim's brain, disconnecting the singularity long enough for the body to fall apart. The singularity landed in a bunch of Cottbus citizens, but was particularly interested in a German man with a metagene.

The Chief ordered Mento to take off his ridiculous helmet, pointing out that it was so silly looking because people would naturally assume Dayton had to use it to employ his powers. It was in fact an affectation to mislead people into believing he wasn't able to psychically probe them at any time...

The singularity needed to be in close approximation to its victims, so Robotman hoped the Chief could call in a speedster like the Flash to zap the population of Cottbus before its experiment progressed further. "Can't have that." The citizens attacked the Doom Patrol, while the singularity used its acquired "Telekinetic projection via Kirlian aura" to tear Robotman limb from limb.

Things were getting out of control. If Dayton acted, Rita would know that he occasionally took advantage of her mind and body psychically, and if he didn't, she would die. Elasti-Girl grew rapidly, blood shooting from her nose as Mento acted through her against the singularity. Its drones destroyed following psychic detachment, only the metahuman male remained, saved-yet-checked by the Kirlian aura. The host was escorted back to Oolong Island, impressed by Caulder's strategy. Rita was bloodied, teary-eyed, and massively pissed.

"Earth Science" was by Keith Giffen, Matthew Clark and Livesay.

You know my feelings on this series. I liked it a lot.

I wish Matt Clark did all the art instead of splitting every issue with Ron Randall. Not that Randall isn't good, but I like Clark.

I think Rita was the most intriguing character in this rendition of the team. But I loved that Giffen smushed all the versions of DP into this series. So sad to see it gone.