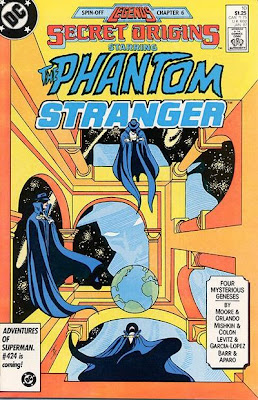 It's Anj from Supergirl Comic Box Commentary, occasional and too infrequent of a guest blogger here at DC Bloodlines.

I have wanted to write this review Secret Origins #10 for some time. And finally, time permitted me to put some thoughts down on paper. This issue came out way back in late 1986, coinciding with the Legends crossover which featured the Phantom Stranger pretty prominently.

As part of the allure of the Stranger is that he has no set origin, DC did something pretty original. They had 4 'potential' origins in this issue, allowing the reader to pick which one they thought were 'truth' or ignore them all as simple possibilities.

The most famous of these stories is by the dream team of writer Alan Moore and comic god artist Joe Orlando. While I will touch on the other stories, I will concentrate my review on the Moore/Orlando offering. 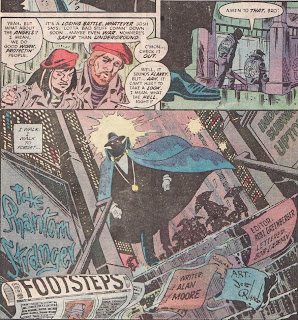 The title of the story is Footsteps and it is an apt one. It echoes both the plight of one of the human characters who is walking in the footsteps of the Stranger's past, his origin. It also comments on the Stranger himself, always walking, walking to forget his past.

In the story, a nameless man is caught between two factions of a sort of neighborhood watch/good samaritan group called the Subway Angels. The Angels founder is named Josh and wants to help the homeless and downtrodden living underground in the subway tunnels. The Angels lieutenant is named Otis. He wants to 'dethrone' Josh, take over the Angels, and mobilize the poor masses into an Army which he will command. Our unnamed 'hero' doesn't know what side he will be on.

So Moore throws a lot at us almost immediately. The human characters are angels ... Subway Angels. The protagonist is nameless, like the Stranger, and caught in the middle of a war. The 'good guy' being named Joshua didn't go unnoticed either.

We then cut to a similar scene and a similar conversation, this one between angels.

One angel is Etrigan, an interesting play on the Demon by Moore. Etrigan was an angel who joined Lucifer in his attempt to overthrow God. Here Etrigan is asking an unnamed Angel which side he will join. All very familiar to our opening scene. 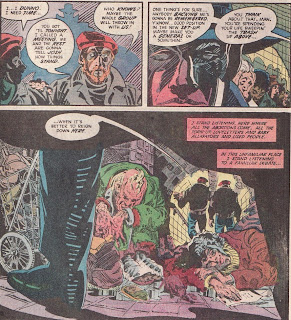 Otis continues to try to convince this Subway Angel to join his revolt. It is better to rule 'down here' (read in Hell) then to serve up on the surface. He promises our unnamed angel a place of power.

And behind them, the Stranger eavesdrop ... and reminisces.

The nameless Angel meanwhile also continues to weigh his options. Does he join Lucifer and Leviathan and Asmodel in fighting God? He can't decide. Lucifer, like Otis, promises that reward will be handed out to those who swear allegiance. 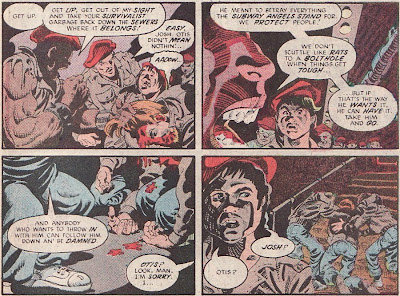 Otis' plans to usurp Josh do not succeed. Otis is thoroughly beaten and cast out. Josh reminds Otis of their mission to help people, not benefit themselves.

Unfortunately, our unnamed Angel never picked a side and as a result he is cast out by both sides of this war. Josh kicks him to the curb. 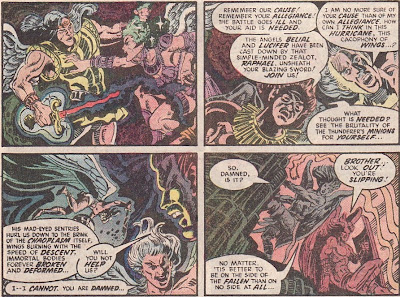 Similarly, the unnamed Angel cannot choose a side in the God/Lucifer conflict. He sits by watching the struggles around him. And he witnesses Lucifer and his comrades get banished from Heaven, cast into Hell. 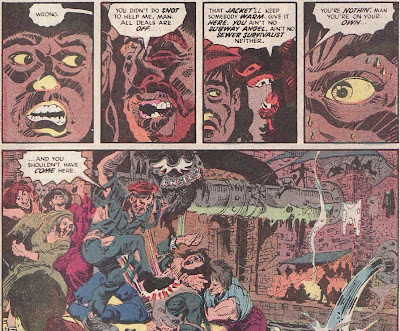 When our human angel tries to rejoin Otis and his band, he is throttled. To Otis, not choosing is the same as choosing against him. He begins to beat the unnamed angel. The scene here is nightmarish. The people with Otis are monstrous, the setting literally the underworld. 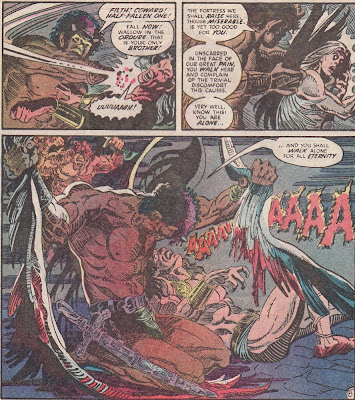 And our unnamed Angel suffers a similar fate. The higher Angels have forsaken him for not choosing the side of Yahweh. The fallen forsake him for not joining their cause. This angel has no home. And his punishment shall be to walk alone for all eternity. Leviathan rips off the Angel's wings. He cannot fly. He is doomed to wander. 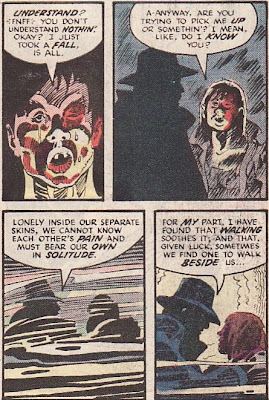 I think everything about this story works. The two similar stories unfolding along side each other reverberates. The Stranger origin carries the weight that someone of his power and mystery warrants. He didn't choose sides in the Holy War. And the story of the Subway Angels carries all the same elements of good and evil, just written at a human level. And Joe Orlando's art is just ugly enough to be the perfect milieu for this story of the most vile of evil, the most nightmarish of settings. 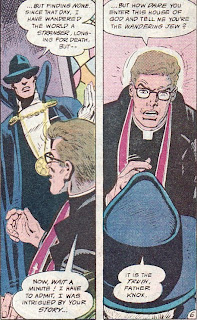 The other stories are hit and miss.

Mike Barr and Jim Aparo write 'Tarry Till I Come Again" in which the Stranger helps a priest suffering a lapse in faith.

The Stranger tells his origin. His wife was killed in the culling of young men by Herod. Angered that Christ lived, the Stranger helped crucify him. And Christ tells him that he must walk the Earth until the second coming. The Stranger is the Wandering Jew. By helping this priest, the Stranger is released from his duties by the Lord. But the Stranger opts to continue to roam the Earth to help those who need it.

I am a sucker for Aparo art. 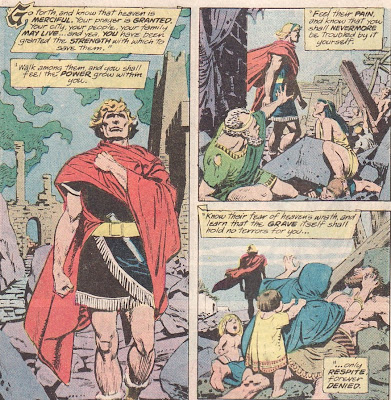 Paul Levitz and Jose Luis Garcia Lopez wrote and drew 'And men shall call him Stranger'.

In this story, a devout man pleads with the Lord not to destroy the sinful city he lives in. When the city is destroyed, the man is offered sanctuary by an angel. But rather than live alone, the man attempts to kill himself.

Both devout in prayers and damned for his suicide, the angel grants the man both power and pain. The man shall walk the Earth as long as there is evil, he will have power to help people turn to the right path, but he will never be one of men, and he shall forget who he is. He will be a Stranger to everyone, even himself. 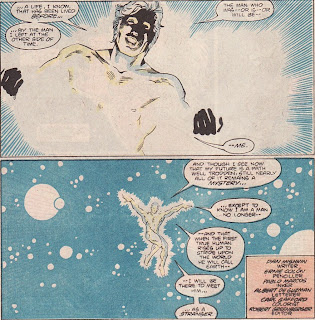 The last story is something of a clunker given the religious overtones of the first three.

'Revelations', by Dan Miskin and Ernie Colon takes place in the future. There, the Stranger tries to stop scientists from witnessing the act of creation. He is aided by a scientist who also thinks this will be blasphemy. Dying, the Stranger gives his power to the good scientist. This man witnesses and becomes part of the moment of creation. Imbued by power, he will eventually become the Stranger who ends up saving him years hence. This was a bit too Star Trek-y for this issue and had a very different feel from the other tales.

Still, overall, this is a neat little issue with some very good stories. The Moore story alone is worth reading, like most things he wrote when playing around the DCU. I found this issue in the $1 box at my local store. I can't imagine it being sold for more than $5. It is worth the purchase.

And that is my review of Secret Origins #10. A while ago, I did a bunch of reviews here on DC Fantasy comics from the early 1970s. I may go more that vein soon!
Posted by Anj at 8:00 AM

The Alan Moore story is the best told, especially when you factor in tweaks to the DC cosmology like Etrigan being an angel. You also have smart textual and metatextual elements, like explaining the Stranger's passivity in crisis and using Joe Orlando on art. That said, I also think it's the least imaginative origin of the lot. He acts as a guardian angel, but he's really a semi-fallen angel. What a twist! Bleh.

Making matter worse, two of the other three origins are biblical in nature. If they came to the idea independent of Moore, it shows how blandly obvious it was. If they did not, then two of these guys were just hacking it out. At least Miskin tried to do something different, even if he wasn't entirely successful.

Not a favorite issue of mine, but an interesting concept, and a swell write-up!

I agree the Mishkin piece is the most ambitious. The Stranger is a mystical character so to infuse it with Sci-Fi was a tricky endeavor.

The Moore one does shine the most though. Solid stuff.