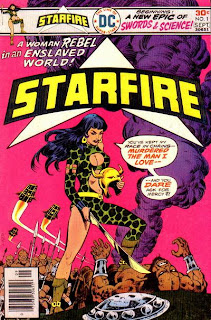 Hi all! It's Anj from Supergirl Comic Box Commentary come once again to the DC Bloodlines blog to share some of my passion for the dustier corners of the DC Universe. As always, I want to thank Frank for setting up this group blog so folks like me have a forum for some comic love which strays from the theme of my main site.

Bloodlines has been a place for me to showcase a relatively new niche love of mine - fantasy comics and occasional sword/sorcery/sci-fi amalgam comics by DC in the early 70s. It all started with Ironwolf mostly because of my love of Howard Chaykin. That then led to Stalker, Beowulf, some Fafhrd and the Grey Mouser adaptations, and the topic of this post Starfire.

Perhaps the best things about these treasures from the past is that I typically find them in good condition for $3 or less, sometimes in the dollar box at cons!

Starfire #1 was a recent purchase from a dollar box and was worth the price for any number of reasons. First off, writer David Michelinie (who I know mostly for Iron Man and Spiderman) casts a pretty unique star in the book, especially given the time it was published. Starfire is half-asian and a woman. Certainly that must have stood out in 1976. Second, artist Mike Vosburg really shines here. Starfire is beautiful and attractive in her barely-there off unitard. But there isn't that much overt cheesecake in her renditions in the book. She comes across as athletic and strong more than anything else. And the theme within this story, of Starfire taking control of her life, realizing that slavery is utterly wrong, is nicely conveyed here. Lastly, I am always into the explosive combination of science and sorcery whether it is Thundarr the Barbarian, Thundercats, Mento and the sorcerors in Alan Moore's Swamp Thing #50, or here in Starfire. What could be a better cover than a sword-wielding warrior woman towering over an ogre, while spear wielding monsters and spaceships litter the background. Slick.

Lastly, you should notice that there is no Comics Code Authority seal on the book. While I have read that it was an oversight, the content of the book - especially the end - might have been a bit tough for the CCA to approve.

On to the story. 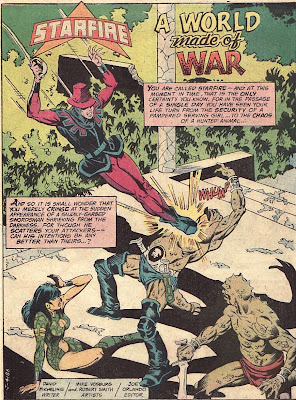 There are some interesting choices to this book right from the first page.

First off, we start out with an action splash page in which the lead character is both a small element and in peril. Who is this Starfire, cringing before a couple of monstrous thugs, being saved by someone in minstrel gear? Certainly not the strong sword wielding woman from the cover. Even her body language and expression says this is someone frightened, certainly not used to a situation like this, like she would be if she were a warrior.

But I also think it is interesting that the narrator isn't first person or third person. Instead it is in the second person perspective - "You are called Starfire." It is tough to pull off but if done right, it makes the reader become the main character. I don't think I have read a second-person narrator in comics in a long long time. 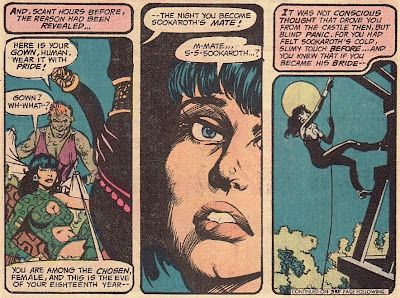 Starfire is rescued by this warrior/priest/bard named Dagan and whisked away on a hovercraft.

We then get a flashback of how she ended up in that desolate place. She was born 18yrs earlier on an Earth where the Mygorg, an alien race of reptilian looking humanoids (see the above splash), rule with an iron fist. Humans are slaves and the world has devolved to a more medieval place, filled with castles and courts and swords.

Because of her half-asian ancestry (described as being born from a 'yellow father and white mother' in 1970's politically incorrect parlance),  Starfire is chosen by the ruling Mygorg Sookaroth to live a courtly life. But even growing up in the lap of luxury, being educated and pampered, she wondered why the rest of her people were enslaved.

Well, on her 18th birthday, she finds out. Sookaroth will make her his bride that night. Disgusted by the thought of his slimy mitts on her, Starfire does something she has never done before. She has rebels, disobeys, and makes a run for it. And that is how she ended up alone and helpless. 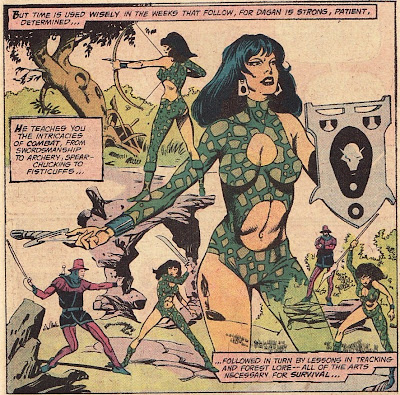 But Starfire is confused with the very concepts of freedom, self-worth, and strength. She even calls Dagan master, unsure of any life but that of a slave.And so Dagan begins to re-educate her.

First, he teaches her the ways of combat and the skills of a ranger. And she is a most adept pupil,  becoming a tremendous fighter and hunter in mere weeks.

This is a nice montage panel for Vosburg. 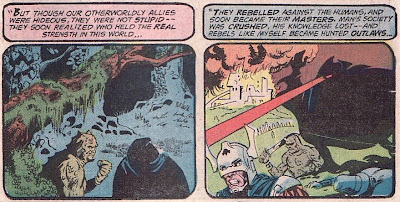 And he teaches her the history of this Earth. The peoples of Earth were feuding. The Church (of which Dagan was a priest) was waging war, trying to gain control of the planet. They used not only science ... but counter-science (which I read as magic).

Alas, it didn't take long for the Mygorg and the Yorg to realize that they really didn't have a dog in the Earth's fight. Instead, it would be easier for the two of them to simply take over the planet themselves. Thus mankind brought about their own slavery and ignorance. Only small pockets of resistance exist on the fringes.

And worse, the Mygorg and Yorg continued their war except now on Earth with humans as their troops.

But a lifetime of believing that mankind exists to serve the Mygorg can't be expunged easily.

Despite these lessons, Starfire still calls Dagan 'Master' ... although now, at least, with a pause.

So now we as readers have an understanding of this Earth and it's problems. 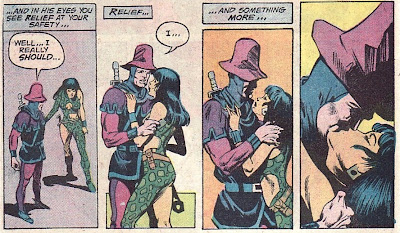 Of course,the weeks drag on and the lessons continue. But with it, comes the stirrings of love.

After a rather intense confrontation with a dinosaur (man, this is a weird Earth), the emotions finally flood to the surface.

The caption reads "and the feeling in your heart is no longer strange ... but shared ..."

Again, lovely art her by Vosburg, slowly zooming in. 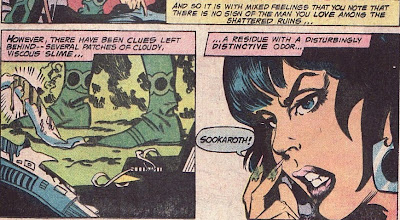 And suddenly the two are equals, partners in hiding.

But tragedy is around the corner. While Starfire was out hunting, the couple's camp is overrun. Starfire comes back to find the place in ruins and Dagan gone.

And it is obvious by the stench who masterminded this kidnapping, her old master Sookaroth.

Using her new abilities, Starfire sneaks her way back into the castle she was raised in only to find Dagan tortured and dying.

Boy ... quite the drama ... her love, the man who gave her an understanding of freedom, a feeling of self-purpose is killed by her old master. Nice.

And with his death Starfire decides that it is up to her to bring freedom to her people, to the world. 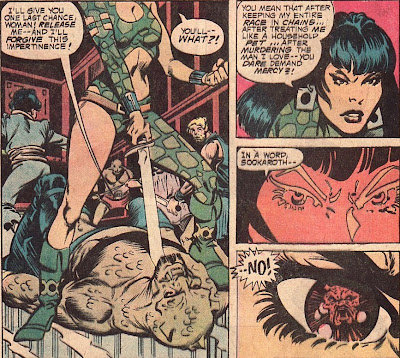 Storming the throne room, Starfire battles Sookaroth. While the majority of this issue runs at a feverish pace, Michelinie and Vosburg take their time here giving us 3 pages of this sword battle. That time and page count devoted to this fight cements how crucial an event this is for Starfire. It is an effective story-telling tool.

And moreover, Starfire shows that she is as deadly as she is beautiful. Despite being weaponless, helpless ... despite asking for mercy, Starfire buries her sword into his throat, killing Sookaroth. Could this have been too much for the CCA?

I love the panel progession on the right, normal panel, red outlined ... highlighting her rage, and then Sookaroth's dying face reflected in her eye. That is story and art perfectly meshed. 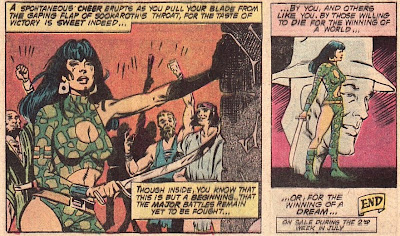 And yet, with the adrenaline worn off, we see a crying Starfire ... and that is in the very next panel! This isn't a one note character, simple rage with a sword. This is a woman who has grown ... become strong and free, learned of love and loss, and understanding that there was a certain catharsis in this killing of Sookaroth.

Look at the slaves cheering in the background, as if they have suddenly learned that there is something more to them than being slaves, if a leader could take them there.

All right, I'll admit that some nostalgia colors my reviews of the sword/sorcery books from the DC Implosion era. But heck, this was a great little story. And boy, could people pack a lot of story into one issue back then. That is some character growth in Starfire and in one issue!

Looking at the Starfire title, it lasted a short 8 issues (as most of these books did for DC back then). Amazingly, it had 4 writers in 8 issues - Michelinie for 2, Elliot S! Maggin for 3, Steve Engelhart for 2, and Tom Defalco for the last issue.

Vosburg drew every issue and seems well suited for the book.

Did I like this book enough to look for other issues? I guess for the right price.

Video games used to use a lot of second person narration. I'm out of that loop, so I'm not sure if that still goes on. Like thought balloons, modern writers condemning anything not easily translated to film as "cheesy," yet other media has had success with it.

Marv Wolfman had to have read this. HAD TO.

I really enjoyed this write-up, and hope I can dig up some cheap copies of my own next week!

You know, I naively overlooked the 'ick' factor of this because of Starfire's unique ethnicity for the time and the fact that it was a strong woman led comic in a time when those were rare.

But reading your comment ... it is a pretty icky book. And despite the excellent vertical panels in my second to last scan, the main panel is a 'she has no head' special with a phallic sword to boot.

Maybe I was looking to hard for the good in the book!

Nah, it's cool! The '70s put the "I" in "id," and I do believe the concessions for race and gender are noteworthy. I enjoyed this, and my curiosity is piqued...

Did you know that you can shorten your long links with Shortest and make money for every click on your short urls.