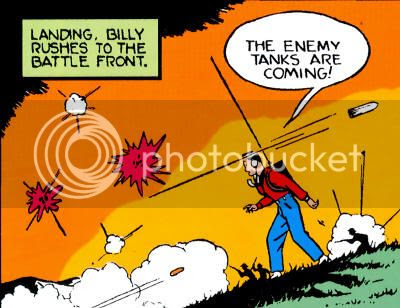 "Every day millions of people listen to Billy Batson bringing thrilling news broadcasts direct from the scene of - spectacular fires - sensational prison breaks - death-dealing hurricanes!" In an unintentionally amusing series of panels, Billy broadcasts through a green backpack with a four foot antennae sticking out of it and a scoop microphone hung around Billy's neck protruding another foot in front of him. Never mind the child endangerment involved with Billy dangling from uprooting trees amidst flames and gunfire. Of course, CPS wouldn't know Billy was also "-Captain Marvel- The World's Mightiest Man."

The President of the U.S.A. received a handwritten note demanding he resign and declare Sivana emperor of the United States. Nothing so puny as knocking over banks for our boy Sivana, eh? Plus, Sivana had the most fabulous "lonely mountain fortress" in comic book history. This thing looked like it was painted in Crayola by a kindergartener tripping balls on psychotropic substances. Billy Batson says, "Kids! Don't Lick Toads!" I'm not sure where the loneliness comes from either, because "Sivana, mad scientist of destruction" was depicted with a broad grin on his face, giving an Arsenio Hall "whoop" to the troops in his mighty army. "Thousands of super-soldiers - hundreds of streamlined tanks - guns that can fire 75 miles - and 120 m.p.h. combat cars - are supported by the mightiest air fleet in history." I'm picturing Lex Luthor feeling like a redheaded stepchild, abandoning work on some new form of dynamite that will, um, be more explody... eying up all those wonderful toys and trying to figure if he could pull off a bald pate in his truly lonely warehouse lab near Suicide Slum. 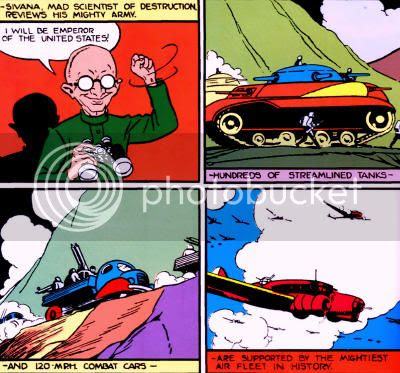 When you've got an army, and F.D.R. sics his g-men on you, might as well send a lovely hand-written note that concisely declares war on the United States. Signed simply "Sivana," but you can feel the love there, right? The skies filled with troops and tanks parachuted onto American soil, then Billy Batson made his cumbersome way via prop plane. The kid proceeded to wander through the battlefield, heavy artillery zooming past his ridiculous aerial, reporting the news until "This is a job for Captain Marvel!" Yeah, sorry, it just doesn't have the same ring to it.

One "Shazam!" later, and bullets were bouncing off the World's Mightiest Man as he tossed multi-secondary-colored tanks against one another. Sivana's troops managed to dig out a gun turret foxhole in rural Connecticut or somewhere, and Captain Marvel twisted those poor bastards up in a silent, silhouetted panel that fairly screamed "Shazamland execution," causing Sivana's soldiers to retreat.

Billy Batson somehow managed to sneak behind enemy lines to the tent of Sivana's general, despite standing at about nine feet tall with his broadcasting gear. One soldier finally caught on to the kid, and grabbing him, was treated to a sock by Captain Marvel in a quick change. Meanwhile, the general had boarded a plane to meet with Sivana. Marvel raced after it, managed to grab the landing gear in a magnificent leap, and stood on the fuselage for the trip to the mountain fortress. 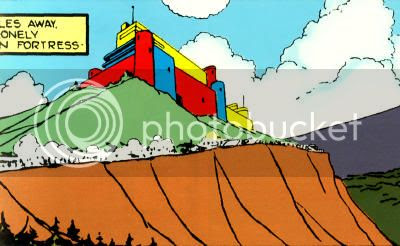 Given that Captain Marvel made no attempt to conceal himself, it was little surprise that Sivana spotted him before landing, and arranged for the hero to be met by armed bodyguards. Captain Marvel rushed at the men, grabbed an overhead pipe, and swung his boots across his enemies' faces. Marvel pressed forward, but was felled by a gas attack.

As Captain Marvel was chained to a wall, Sivana laughed with a "Hih! Hih! Hih!" Sivana then showed off his latest machine of destruction, a three part atom smasher painted green, red and blue. "In five minutes that machine will blast you to bits. But I won't be here. Goodbye, Captain-" You've got to respect Sivana's willingness to blow up his mountain fortress of fabulosity to nip this super-hero business in the bud. No elaborate death trap here. He's like, "Look, I can't shoot him, and I'm not screwing around until he manages to get loose. I'm just going to blow everything to hell as soon as I can reach minimum safe distance."

Unfortunately for Master Sivana, he'd promised his troops that invading the States was a can't lose proposition, and a bunch of them came back to confront him on the oversight. Meanwhile, Captain Marvel burst free from his chains and leapt out a window. Seconds later, the atom smasher blew the fortress to kingdom come. "Farewell, Sivana," Marvel said with a wave. Shazam, and Billy Batson was reporting "Ladies and gentlemen, Sivana is dead- by his own hand!" Quite the sensational scoop, but while the story ends asking the question of whether Sivana was really dead, what I wanted to know is where that broadcasting equipment went while Billy was Captain Marvel...

The first story in Whiz Comics #3, sometimes referred to as "Sivana Strikes Again," was written by Bill Parker and drawn by C.C. Beck with Pete Costanza.

Posted by Diabolu Frank at 4:57 PM