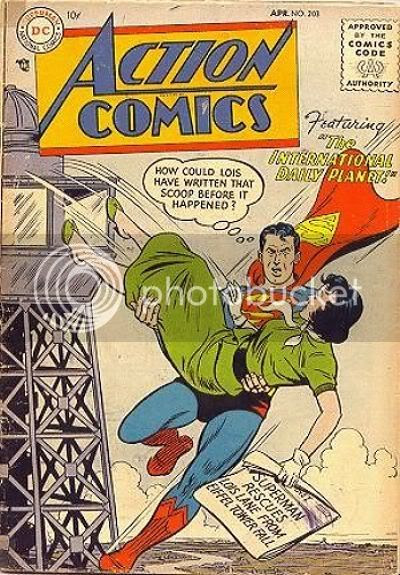 Jules Feiffer observed, "The advent of the superhero was a bizarre comeuppance for the American dream... Once the odds were appraised honestly, it was apparent you had to be super to get by in this world." He went on to note that all the pulp heroes like the Shadow and Green Hornet were fakes getting by with gimmicks, while Superman was essentially omnipotent. That being the case, Feiffer questioned the geeky Clark Kent put-on. "Superman as a secret masochist? Field for study there... why not a more typical identity? ...The truth may be that Kent existed not for the purposes of the story but for the reader. He is Superman's opinion of the rest of us, a pointed caricature of what we, the noncriminal element, were really like." Fans of "Kill Bill" may recall Tarantino and Carradine swiping the argument. I beg to differ.

Who amongst us talks to children openly as equals? That don't wish to be arrested, or at least become scorned by society? How can you be anything but at least a little patronizing and reserved amongst minds that just are not mature enough to be subjected to naked truth? It isn't that Superman critiques mankind-- it's just that Clark Kent is as close as he can come comfortably to our level. Yes, he's talking down to us, but with the best of intentions.

"It seems that among Lois Lane, Clark Kent, and Superman there existed a schizoid and chaste menage a trois... it appears he wanted Lois to respect him for his fake self... to be there when he pretended he needed her. She never was -- so, of course, he loved her. A typical American romance. Superman never needed her... Lois chased him -- so, of course, he didn't love her... Clark Kent acted as the control for Superman... Our cultural opposite of the man who didn't make out with women has never been the man who did -- but rather the man who could if he wanted to, but still didn't... Real rapport was not for women. It was for villains. That's why they got hit so hard."

Alternately, Superman could be the overprotective guardian. Lois wants Superman, in ways a child should not want her super-daddy. Superman, naturally, races to protect her when she once again is endangered, but is then skeeved out by her advances. However, Superman is a loving authority figure who doesn't want to damage the girl's self-esteem, so he provides her with a safe, undesirable affirmation of her womanhood-- Clark Kent. Just a theory.

Next we could consider Larry Niven's 1971 essay, Man of Steel, Woman of Kleenex. Suddenly, his heartbreaking, repetitive returns to save doomed Krypton through time travel make so much sense. Even if the Strange Visitor from Another Plant were willing to stoop to pedophilia/bestiality and lie with creatures of another species, who's to say they wouldn't "break." I seem to recall Superman once had a doomed romance with a blond actress on Krypton whose name escapes me-- that is before the world died. Of course he'd know unfathomable longing for his time-lost movie star lady love... it's the reciprocity I wonder about. Sure, Superman would be a sweetly naive, rugged brute of a man to a native Kryptonian. That might keep your interest for a while. Then it starts to set in that this guy has not spent his life amongst his super-intelligent brethren, but simple grade-schoolers. Likely the "special" kind. What would you talk about? Further, if there's one area Superman would fall short under the circumstances, it's "experience." Faster than a speeding bullet? More powerful than a locomotive? These are not quite accolades when applied to one's tender nether regions. Perhaps it was best to leave Krypton as it no longer stood? They'd always have Argo City...

I once had similar thoughts about the Martian Manhunter, until he went through a streak in the 90's when he started bed hopping. I came up with another idea for him, which can be read here.
Posted by Diabolu Frank at 3:19 PM

Interesting line of thinking, but I prefer (and find more relatable) the Superman who has the intangible concerns of humans, skipping right past things like food, shelter and technology. Superman allows one to really focus on why you love some one (All Star Superman #3) or how to deal with a willfully difficult adversary (Luthor). These are problems that make Superman interesting, and a viable storytelling device beyond the standard power fantasies.

True, but a lot of All-Star is a reaction to the modern status quo in relation to the Silver Age. Feiffer focused on the Golden and (to a lesser degree) Silver Age, Niven was pretty much exclusively concerned with the latter, and my commentary tried to address Superman in that context. The Post-Crisis (and really, Post-Weisinger) Superman is an almost completely separate character, so that even the backward looking All-Star feels more like second hand '50s nostalgia passed down from Alan Moore mingled with a love for Elliot S! Maggin through John Byrne. Pre-Schwartz Superman was a totally different guy from what most of us grew up on, and I kind of wish both interpretations could coexist (ala Earth-1 & Earth-2, although they never really made that work.)

"Then it starts to set in that this guy has not spent his life amongst his super-intelligent brethren, but simple grade-schoolers." Is Superman really super-intelligent, though? I think Batman has him beat in the intelligence category. (Then again, I know next-to-nothing about Superman comics.)

I prefer not to overthink Superman, and I think he's one of the best examples of a character needing to be taken at face value and not analyzed too deeply. (Though I do appreciate the theories.) When you look at him too closely, things start to unravel into the ludicrous. Though, there are some interesting gender dynamics at play, as you have pointed out.

"if there's one area Superman would fall short under the circumstances, it's "experience."" Oh, Lord. This actually came up on Smallville. That was an awkward, awkward episode. And it wound up being a kind of pointless episode, too.

Superman is the sausage of the DCU. Hot dogs were so much more enjoyable before Upton Sinclair came along.

Superman was super-intelligent Pre-Crisis, although he was somehow still kind of dumb a lot of the time. His intellect was mostly played up in the Silver Age, and began its decline going into the Bronze.

Still no sense of super-humor, though, right? (I know Seinfeld brought that issue up.)