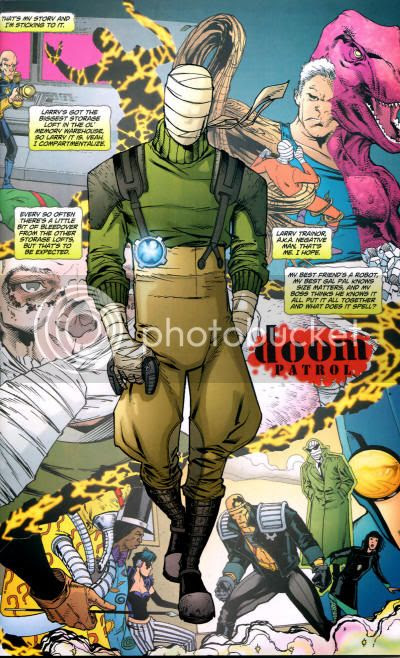 Negative Man is Larry Trainor. That's his story, and he's sticking to it. Test pilot for the military's own space shuttle, the K-2F. Bird flew too high without enough radiation shielding, and crashed back to earth. A rescue chopper was then downed by an energy wraith emitted from Trainor. Larry didn't remember much, but he woke up wrapped in chemically treated gauze to keep the radiation he had absorbed from contaminating others. This came courtesy of Doctor Niles Caulder, who eventually secured Trainor's release after months of playing specimen for military scientists. Larry had lied about his Negative Man projection being a one-time thing, refused to live under Caulder's supervision, and wasted a year of his life bumming around. Directionless, unable to find work, and dependent on the chemical wraps that arrived by mail wherever he went, Larry finally gave in. After the third proposition, Trainor joined the Doom Patrol, as the death-seekers jumped from one dangerous mission to another. It finally caught up to them.

One day, the Negative Man became a Negative Woman, and joined an all-new Doom Patrol. Later, the Chief turned up alive, and hijacked that unit for his now clearly bent schemes. The Negative form left Valentina Vostok and rejoined with what it thought was a clone of Trainor created by the Chief. Larry continued with an ever more surreal incarnation of the Patrol, before realizing that his skin was the color of another race under his bandages. As it turned out, the Chief had found a brain dead individual named Thomas Munroe, pumped in some of Trainor's old genetic material from his government tests, and drawn the Negative Man to this body. For a time, "Larry" thought that the Negative Man had gained its own sentience, but as it turned out the semblance of personality was just bits of Munroe's brain still firing. 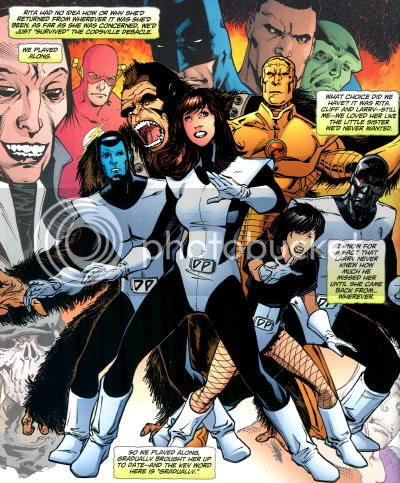 Amidst this madness, the Negative Man's personality began to dissolve into an hermaphroditic "Rebis." That was very much its own thing, too involved to get into here. Eventually, the body of Phillip Sloan became the latest host for the Negative Man, once again arranged by the Chief. The Negative Man passed on joining a Doom Patrol incarnation under "bona fide corporate bigwig Thayer Jost," even with Cliff Steele's urging. Later, at the same Sundollar Coffee, Steele successfully recruited Negative Man by saying Rita Farr would be back from whatever hereafter she'd been blown to all those years ago."What choice did we have? It was Rita... We loved her like the little sister we'd never wanted... Without Rita, we were freaks for hire. With her, we were the closest thing to family Larry'd ever known. How pathetic is that?"

"Negative Incentive" was by Keith Giffen, Matthew Clark and Livesay. I don't know enough about the Doom Patrol to know how much Giffen salvaged or trampled over past continuity, but as presented it made sense to me. It was nice to have such sweeping events laid out in so palatable a fashion, and the slightly nutty, often snarky Negative Man worked better in my mind with context.

As I have said on this blog (my first Bloodlines post I think) and other places, the thing I liked about Giffen's run was that he accepted all of the revisions/reimaginations/relaunches of the Doom Patrol and made them canon.

He did several issues like this one, focusing on one of the team members, looking at the frappe of continuity they have, and making it have a sensibility.

It isn't Morrison. But it is pretty good.

New Teen Titans #13 and Showcase #94 are two of the reasons I love comic books.

I've got another six issues written up, but timing it up with other blogs hasn't worked out so far...