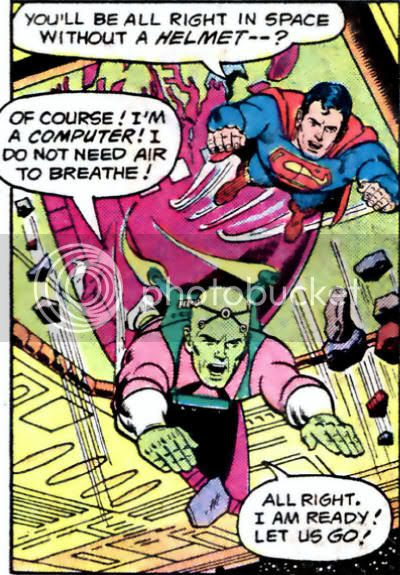 Previously, Superman had managed to reprogram the living computer called Brainiac into a force for good. Unfortunately, Brainiac had long ago created the Planet-Eater doomsday starcraft, which devoured all forms of matter unlucky enough to cross its path, and was now headed towards Earth. By comic book contrivance, Superman had to deprogram Brainiac back to evil in order to help him stop the Planet-Eater, and Brainiac could never again be reprogrammed without being destroyed entirely.

The spaceship in which they traveled was caught by the Planet-Eater, so Superman and Brainiac escaped into space. The Man of Steel was caught by a giant mechanical tentacle, so Brainiac saved him by using the energy of a ray pistol to draw the machine's attention toward the power source. However, both were then caught in a "gravity tug," drawing them toward the belly of the beast. In an unusual instance of equal opportunity cheesecake, Brainiac was drawn from the panty shot vantage point for a page's entire five panel sequence. Superman had managed a finger hold to save himself, but had no strength left for Brainiac. The living computer begged, "I-I need your powers to save me, Superman... I NEED YOU NOW! ...Help me... please, Superman... PLEASE HELP ME!" After Brainiac had just rescued the Last Son of Krypton, it was surprisingly affective to hear his pleas as Superman sacrificed the robot. "Lord, h-he's gone... and there was absolutely nothing I could do." 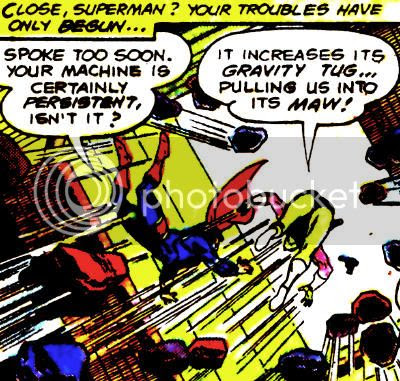 Superman lost his grip, but managed to push himself through a wall into the ship. However, the interior defenses bathed the Kryptonian with red sun beams and kept him constantly redirected in the air, unable to gain his balance. Finally, Superman was drawn to the Planet-Eater's giant computer brain, adhered to its surface. The Man of Tomorrow was shocked to find that he had been trapped by the Twelfth-Level intellect, pink briefs, and white go-go boots of Brainiac. This treachery was in service to Brainiac's "original programming, my original creation... conceived for one purpose only-- conquest!"

The Planet-Eater was designed to devour all worlds, then create from the raw material a single Pangaea planet to be ruled by Brainiac and populated by the restored citizens of the various cities the living computer had miniaturized over the years. That plan was almost as ill-conceived as using gravity to press Superman against the control center of this entire operation, as Super-Breath turned our hero's body into an instrument of lobotomy. Superman next used his cape and speed to evade contact with more crimson beams of red-sun rays. Finally, Superman led the jetpack-empowered Brainiac on a chase that trapped the villain within the coalescing new planet of his own devising. "For better or worse, Brainiac, you have your planet! And I the painful task of finding the way to set you free!"

"Fantastic Deadly Voyage" was by Marv Wolfman, Curt Swan and Dan Adkins. The worst thing about the story is also the best thing, that it is completely nonsensical. It's weirdly awesome when it's not dumb as a bag of hammers. Adkins does a nice job loosening up the anachronistic Swan, and I love how Wolfman manages to tug at the heartstrings over Brainiac, of all things.