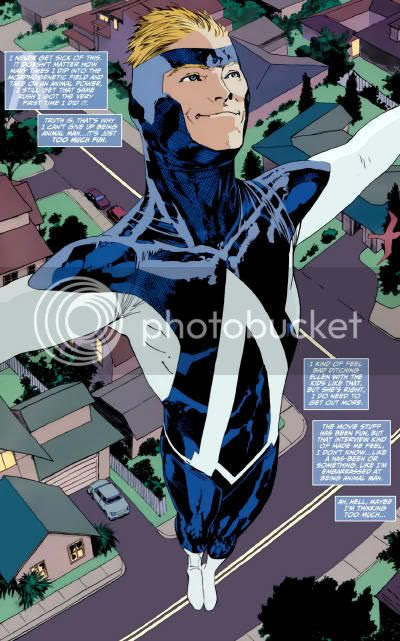 Buddy Baker was a stuntman, had dabbled in acting with an independent picture, and was getting back into super-heroing after a bit of a hiatus. At home, he fretted over how he came off in a magazine interview while his wife Ellen cooked dinner. Daughter Maxine was obnoxiously persistent in trying to get a pet doggy with a bit more life than her stuffed doll, Mr. Woofers. Buddy explained once again that his animal powers would zero in too much on an in-house pet, plus the death toll on previous pets was already at two. Son Cliff ran into the kitchen with word of a hostage situation on the news, so Ellen let Buddy fly off as Animal Man to check it out. Besides, it was a role her husband had just too much fun playing.

Detective Krenshaw greeted "A-Man" at the children's hospital where the grieving father of a deceased cancer patient was in denial and demanding the return of his daughter. Animal Man entered the building and tried to reason with the guy, but when shots were fired, he swiftly tapped into the morphogenetic field to survive and conquer. However, Buddy's eyes began to spontaneously bleed. After getting checked out by a doctor, Buddy returned home to his sleeping family. 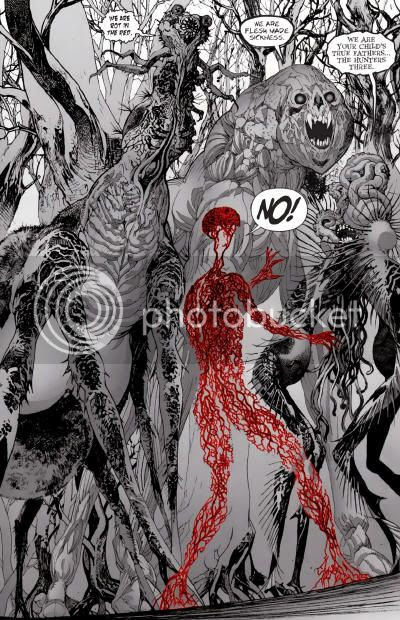 Slipping into bed, Buddy had a nightmare about being in a twisted, dead forest. Cliff had been eviscerated by Maxine, who was being served by a mammoth Mr. Woofers. Maxine was on the run from "the hunters," and hid in a river of blood. Buddy's body deteriorated into nothing but brain and nerve endings, and he was caught out in the open by terrifying creatures.
"We are the Rot in the Red."
"We are flesh made sickness."
"We are your child's true fathers. The Hunters Three."

Buddy woke with a start in the night, only to find his wife gone. Hearing a call from the back yard, Buddy found his horrified family. Maxine was kneeling on the lawn, Mr. Woofers in her lap, petting one of the ten animal corpses that she had reanimated. "I-I'm sorry, daddy. I just wanted a pet of my own."

"The Hunt Part One: Warning From The Red" was by Jeff Lemire, Travel Foreman and Dan Green.

So did you like the issue? I really enjoy this series, but I'm an Animal Man junkie.

It's one of the better Lemire stories I've read, and I quite liked the art. Looking forward to checking out more. I've got the first Morrison trade lying around, as well.