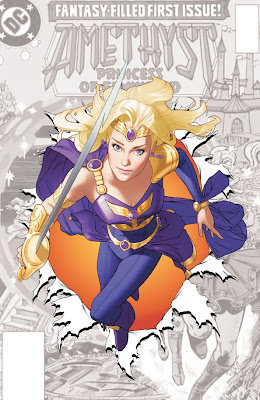 Hey all. It's Anj from Supergirl Comic Box Commentary. And man, I just can't seem to get away from reviewing DC's 70's fantasy books!

Now frequenters of this blog will know that I loved Lopresti's work on Wonder Woman, especially the Ends of the Earth storyline starring DC's 70's sword and sorcery characters. In fact, that arc led me to seek out those titles and subsequent reviews of Stalker, Beowulf, and Claw the Unconquered here at Bloodlines.

Imagine how strange it was to hear that there will be a back-up feature in Sword of Sorcery ... a new Beowulf strip written by Tony Bedard and drawn by Jesus Saiz (who was fantastic on the new BoP).

It seemed like a bit of karma that both Lopresti on a sword and sorcery book AND a new Beowulf were both around the corner. I didn't really plan to revisit these sword and sorcery books here but with that much coincidence happening I felt I needed to. So why not take another look into the fever dream of DC's Beowulf book. 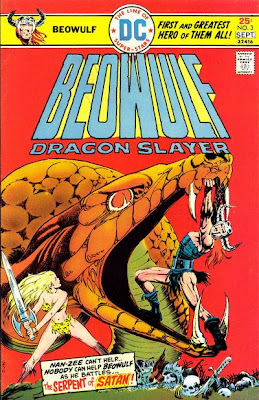 Now in both #1 and #2, it is clear that this book was going to be a bit off the tracks, a wild tumultuous ride of zaniness, vivid imagery, and 'that just happened!' moments. And Beowulf #3, by creative team writer Michael Uslan and artist Ricardo Villamonte is no exception. Things are crazy here ... but in a good way, in a twisted way with unexpected moments.

And Villamonte's art so perfectly captures the testosterone fueled, LSD addled feel of the book. The colorist is unnamed but whoever they were, they added much to the book.

I also have to compliment the cover here. Much like Stalker #1's fuscia cover, this predominantly scarlet cover just grabs the eye. I even like that the serpent's orange scales are close to the scarlet as it makes it feel like the snake dominates the space. Add to that Beowulf being in the beast's jaws and the warrior woman Nan-Zee wielding a broad sword ... elements common to many 'barbarian books'... make this cover a winner. 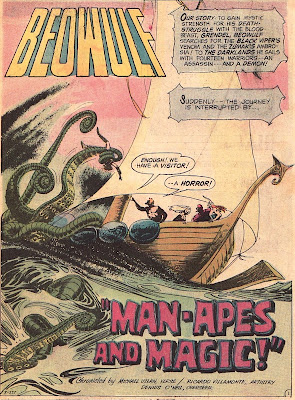 Last issue, Beowulf confronted Satan himself to try to stop Grendel, a devil-spawn bringing havoc and death to Hrothgar's mead hall. Bored with Hell, Satan decided to give Beowulf a sporting chance against the demon sending the Geat on a quest for the black viper's venom and ambrosia of the Zumak plant. These ingredients would make Beowulf equal to Grendel in strength. Of course, Beowulf would need to survive the quests to get that far.

And the journey to the Black Viper doesn't start out well with the ship being attacked by a giant squid like monster. Beowulf and his men ... as well as Scyfling warrior woman Van-Zee, lash out at the tentacle hoping to send to beast to it's final destination.One thing I like here is that Van-Zee is shown to be a fierce warrior, even better than most of Beowulf's troops. And while she is only in a leopard skin bikini, it is similar to the mostly bare, loin cloth wearing Geats.

I have said before that Villamonte's art is one of the draws to the book as he is able to cope with the wild places Uslan's script sends him. Finally the monster's head is coaxed out of the water. And Beowulf's giant (and I mean giant) mace beings a quick end to it. In fact, in its death throes, the beast basically explodes with mystic energy.

Beowulf is unflinching against this thing, chiding his men for showing some fear of this thing before bludgeoning it to death. Fantastic.

Plus, I have to give kudos to the colorist again. The electric pink and purple backgrounds here give this a completely surreal feeling, adding to the scene more than a blue sky filled with cirrus clouds would have. Wonderful. 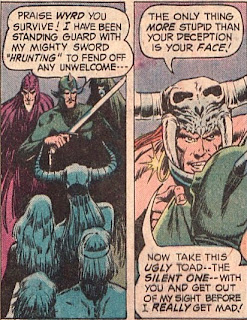 For the most part, I have actually enjoyed to bizarre nature of this book. Especially when Beowulf seems to take everything in stride. I mean last issue he cut off Satan's ear and hours later was chilling out drinking mead like nothing big happened.

So this dialogue while unintentionally funny just felt out of place in the book. I mean Beowulf just said that Unferth had a stupid face. That's schoolyard taunting and not befitting the warrior we have come to know here.

As for Unferth, last issue it seemed like he might have turned the corner with having respect for Beowulf, here he is back to his old tricks ... not helping in battle and plotting against the hero. I especially like 'the Silent One', Unferth's cloaked creepy friend. I wonder if we ever find out what that thing is. 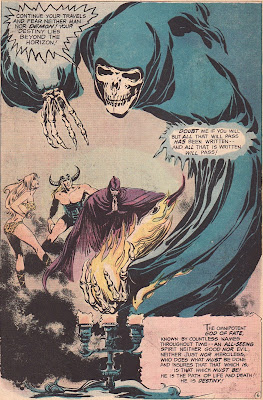 The attack on the ship makes Beowulf wonder if Satan even plans on letting him live to start the quest let alone finish it. To get some otherworldy advice, The Shaper, Beowulf's magical bard companion, summons Wyrd to the ship. As Wyrd is basically Fate, everyone seems a bit more at ease when he says they will survive at least to the viper's island.

As I have said before, Villamonte's art is lush when it needs to be. I thought this was a great splash page. 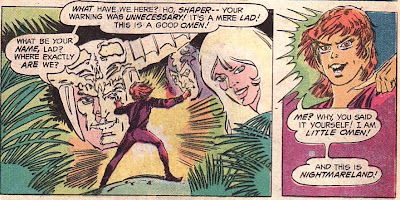 But I also have commented on the insanity of this title as well.

The ship is able to land on the island where the viper nests. Upset that Beowulf continues to best him, Unferth uses his magic to summon 'Little Omen', a tiny sort of Peter Pan like demon.

Judge him not by his size! Little Omen has great powers and immediately brings them to Nightmareland. Most of the 'magic' spells in this book are simply words spelled backwards. So I wonder if this is a riff on Little Nemo (omen is Nemo backwards) taking them to Nightmareland rather than Dreamland. 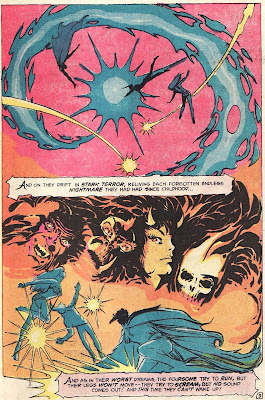 And it is a nightmarish place lacking boundaries or solidity - just vivid colors and freakish visions.

This again shows how Villamonte and the colorist are able to bring a sense of high art to the book. This surrealism is as powerful as the more photorealistic parts of the book. Again, just a lovely page of comic art here.

The threat of Little Omen is shortlived though. The Shaper is not only able to shake off the effects of this place but also to banish Omen back to where he came from. 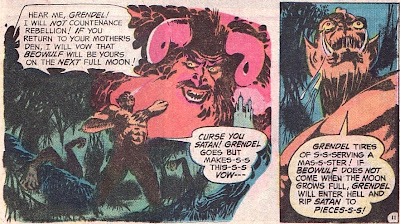 Meanwhile, things aren't great back in Hrothgar's land. Grendel has some serious violent tendencies. He isn't happy that his battle with Beowulf has been delayed by Satan's games. He demands that Satan produce the Geat immediately or he will rebel.

When Satan says Beowulf will return by the next full moon, Grendel issues an ultimatum. If Beowulf doesn't show, Grendel will descend into Hell and kill Satan! That just happened! 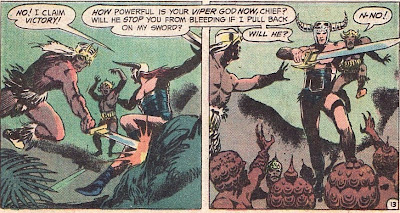 As if dealing with Little Omen was bizarre enough for this issue, the people of the island ... pygmy head hunters ... swarm Beowulf and his group trying to kill them. The pygmy king worships the Black Viper and doesn't want harm to come to it. He even sends out the pygmy version of Goliath (who looks about Beowulf's size) to fight the hero.

A giant squid, Little Omen, and pygmy head hunters all in one issue! Standard Beowulf fare!

At first Beowulf threatens the king with beheading as a way to stall the fight. But then he tells the king he has no intention of killing anyone without cause.Amazed at Beowulf's ethics, the king immediately changes his mind about the viper. He tells Beowulf where he can find it.

Because it is his quest, Beowulf denies anyone to come with him. He will face the viper alone.

I have to say that I like the Van-Zee character. Throughout the book she is shown to be a fiercely independent and deadly warrior woman. But it is also clear she has feelings for Beowulf as well. In a time when comics could veer to stereotypical damsels in distress or she-devils with swords, Van-Zee is actually fairly well rounded. 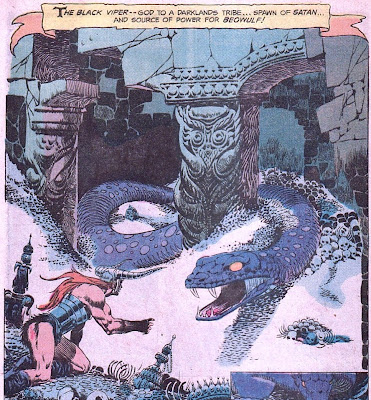 I also love this panel as Beowulf enters the Black Viper's pit. Just wonderful work by Villamonte giving detail to such things as pillars and booty as well as showing that this pile the viper rests on is a bed of bones. 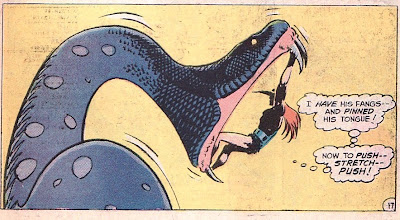 Of course, to add to the difficulty level, Beowulf went in unarmed. The best way to kill the viper? Crawl into its maw and break its jaws from the inside out!

With a satisfying crack, the snake is killed and Beowulf drinks deeply of its venom. Luckily, Satan held his side of the bargain. The venom doesn't kill Beowulf. He is halfway home to his quest.

I don't know what I can say about this book anymore. It is such a wild ride, a mix of sheer psychedelia and wild barbarian fun. The art work is stellar. And even the characterization, while not nuanced, is consistent and solid.

Do I take Beowulf at all seriously. No I don't. But from a sheer entertainment value it is superb. It is the guiltiest of treats. I think I simply need to hunt down the remaining issues.

Unfortunately, that means that the new Beowulf has a high water mark it will be judged against.

Wow, this sounds quite the ride. I wonder if the colourist was Tony Tollin, he loved the old pinks, his Green Lantern of the Seventies was awash with 'em.

It'll be interesting to see whether the new version skews closely to this take.

Good call on Tollin Mart! It sure does look like his style.

This book is such lunacy I doubt they'll go in this direction.

Too bad ... this is pure cotton candy laced with LSD fun!

Highlights:
"the testosterone fueled, LSD addled feel of the book."
The chiaroscuro effects contrasting against the more standard barbarian art to suggest otherworldliness.
"the warrior woman Nan-Zee"
Threatening the head of the pygmy chief.
"A message for your unholy master, Satan! Give him THIS from Beowulf!"
Little Omen in Nightmareland.
"The only thing more stupid than your deception is your face!"