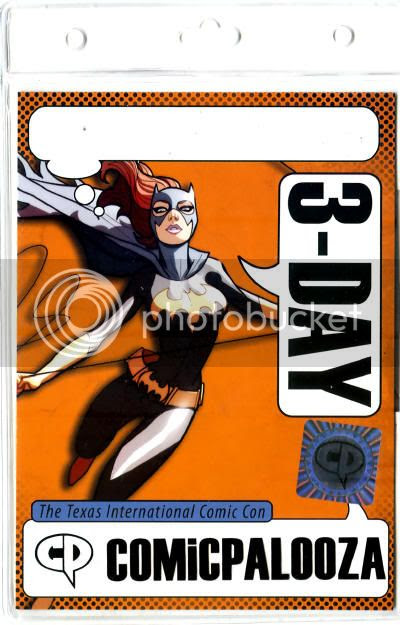 The first day of Comicpalooza was scheduled to be spent with my girlfriend. I'd blown off pre-registering, and we arrived 40 minutes late due to errands and a very necessary Chick-fil-A layover (sorry, but their nuggets trump my politics, especially on an empty stomach.) Nearby parking was $10, but at the center there were two lines spanning a few hundred feet waiting for the doors to open. Thankfully, there was no wait at the ticket booth, so we probably could have stood to have waited instead of standing in wait. Folks were passing out bags with the program and some fliers/coupons. My one complaint was an overly pushy steampunk vender working the line, trying to harangue parents into visiting his stand for cheap ray guns. He had to return ahead of the lines' entry though, and we collectively made it inside at a brisk pace.

One of the nice things about the previous two years of the con was their taking place on the third floor of George R. Brown, with its plush maroon carpeting and swanky lounges. I doubt dealers hefting boxes into service elevators or attendees corralled onto escalators agreed though, so this year everything was on the first floor. I was put off by the dull gray warehouse vibe, looking like every third convention anywhere else in the land, but I must admit that the temperature seemed to stay lower with two floors of buffer from a roof in Texas. 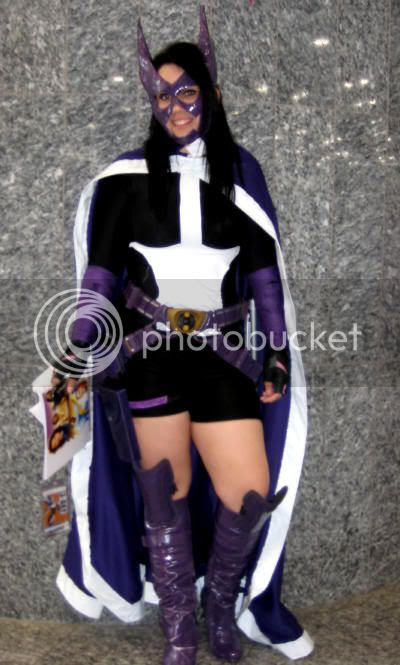 Artist Alley was conveniently located along the right hand side of Plaza A. My girlfriend was linked at the palm, so I dragged her on a canvassing tour of the area multiple times as I oriented myself to where artists were or would be. I had a short list of "name" artists I wanted to either secure commissions from early or blow off entirely, so as not to be a frustration or distraction. I spent nearly $600 in under an hour on my first three commissions, near to double my entire budget for any previous Comicpalooza. I say this not to brag, but because it weighs heavily on me. It's nice to finally have money to do this kind of thing, but it really gets hard to justify when I think about bills I could be paying instead, or hell, even charitable donations. The more I thought about it, the more I was troubled about the distribution of wealth. The cheapest sketch I bought was $5, and it kind of showed, so getting 120 of those sketches would not have equaled the three mentioned. However, when I find a perfectly good artist quoting me a perfectly reasonable $75-100 for a full figure, and I'm too broke to bite because I blew so much of my wad on three pieces, it hurts. When I've got a slew of guys I'd like to get $50 pieces from and ramp up the variety, there's a sting there. If I've got an artist knocking out really great $25 pieces, are three with "names" attached worth 24 from a talented unknown? I fear I may be a commission socialist. Sketchers of the world unite (and demand the scab not devalue everyone else's quotes!)

Based on prior experiences and my present unease, I realized that my comfort zone on an individual commission is about $80-100. I can go less, and I can go a bit more, but the price raises my expectations and irritations. For instance, one guy I was really looking forward to getting a specific piece from had online rates of $100, but they were 40% higher at the show. I could get a nice piece for the $40 difference in price alone, and since the guy didn't have a lot of commission examples online, I had no idea whether he could live up to that quote. I was pretty miffed about it actually, and I didn't see too many people at his table. I got about seven more commissions that day, all but one pretty damned awesome, and not a single one breaking triple digits in price. 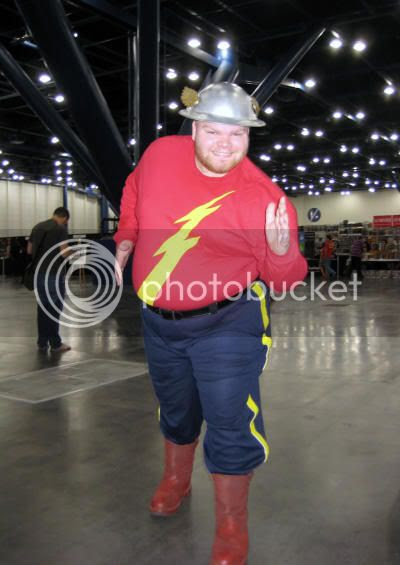 One guy I was interested in working with was big on horror stuff, so I had some guys in mind for him to draw. However, from subject matter to dimensions to price, I had trouble pinning the guy down on anything, and gave up. The dude had some really nice scratchboard cards-- you know, those shiny black numbers where you take a knife and cut away until you get to some coppery/bronzy metal underneath? He even had a dye to color them. My girl dug them, and ended up working out a commission of her own. Well, that's something

Later, she took to Dirk Strangely, who I've avoided for two years running. I hate that Hot Topic goth stuff, and even his signage seemed to have a Danny Elfman soundtrack. However, once the GF had me standing in place, I noticed the guy had some genuinely good work on display. The GF decided on a print called "William the Pleaser". It was outtasight, and I noted the Dave McKean quality it had. The artist agreed, and mentioned having worked with McKean on a print. He also said that this piece, depicting Tom Waits, was the first time that he had produced a work purely for himself, irregardless of its saleability. Further along, the GF bought a couple of Big Bang Theory related prints by Robert James Luedke. I'm somewhat less proud of her taste there. The House word art by Jeffrey Loh redeemed her somewhat.

Toward the back of the alley, various dealers started to mingle their booths. At one steampunk area involving girls in corsets, I thought I spotted an ex of mine. Since my GF is kind of jealous/neurotic, I did not need that scene, and began a game of Avoid & No See. 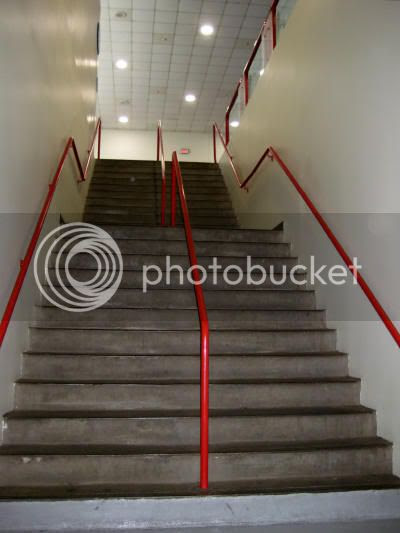 Behind a massive wall lay Plaza B, the activity zone. I assume that since the main stage was still being constructed, Michael Biehn's scheduled Q&A involved Kyle Reese centering himself amidst a few score of fans, having an informal talk unassisted by any sound equipment. Pretty brave, if you ask me. I saw him a lot over the weekend, usually at his booth with Jennifer Blanc.

Some LARPers were in a pen demonstrating the fine art of whacking each other with foam weapons. Surprise-- the tall guy with the longest handle won. The GF had me sit through "Muggle Quidditch 101" which explained the rules of a Harry Potter game involving the guys who usually get picked last running around with sticks between their legs playing basketball by way of touch football. I used it as an opportunity to reorganize my commission list to account for the artists I'd passed on, but still had characters that I wanted somebody to draw. One of the guys from Arc Attack was playing guitar and singing "Lovesong," so I was content for the moment. The GF got bored with the muggles a few minutes into the game, as did seemingly better than half the audience, so we moved on. We both needed to use the restroom, so we descended two flights of stairs to the basement john. This amused me, and I dubbed it "The Pit of Micturition." Somebody at some point has lost more than pee down there. 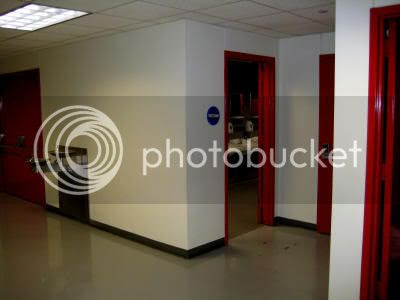 Behind another wall was Plaza C, the convention equivalent of a shantytown. Gone were all the nice classrooms, meeting places, and theaters of the third floor. In their place was a warehouse full of black drapes on poles. Anyone who had anything to do with this section was well and truly screwed in the bunghole. At the right hand corner was a floor area for setting up miniatures, of which there were a handful spread far apart and a whole hell of a lot of floor. There were also tables for RPGs. I dubbed this the "Gamers' Ghetto," and mostly steered clear of it throughout the weekend. It was where dreams of convention planning competence went to die.

Back in Plaza A, I have no recollection of individual shop names, but I did get a kick out of the old nostalgia huts with dusty books and yellowed blister packs on the left side of the hall. One stand had tons of sealed trading cards from the '70s up at very reasonable prices, in case you had a hankering to wrap up your Growing Pains set. One local reporter bought a pack and ate the decades old gum inside. It was about as bad as one would expect, especially if like me you have not-so-fond memories of how awful those sharp shards of stank were new.

Joe Kubert wasn't around on Friday, but his school's booth was open. They were taking donations for Ronald McDonald House Charities by promoting a raffle for an original piece of Kubert art. I overheard someone later mention that Kubert had asked the con promoters if a Watchmen character would be okay. I bought a few tickets, but alas, never heard anything or saw the piece. All for a good cause, though.

There were a bunch of "professionals" involved with entertainment, gaming, etc. I don't know or care about any of that. 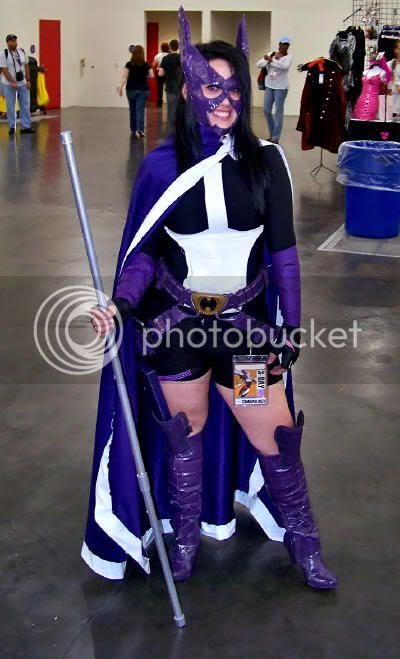 I didn't take this pic, but it's the same Huntress as before, and there was space to fill.

I needed to go to my niece's graduation ceremony, and wanted dinner before making the long drive out to the country. I was shooting for a five o'clock exit, but finishing touches were being done on one of the pieces that I didn't want to rush. I made a point of telling all the other artists with pending pieces that I'd just pick them up the next day. Testing was being done on the Arc Attack electrical show, and my gf wanted to see it, but that wouldn't start until later. To kill time, we caught some of the Braggart Family SideCircus. I realized that the girl I thought was my ex was in the show, that she was clearly too tall, and then there was the part about her resembling the ex as she appeared a decade ago (as opposed to the present.) So no, identity confusion there. Anyway, we watched a guy stand on top of another guy and juggle knives, followed by a dude on a bed of nails having a cinder block on his chest smashed with a sledgehammer. My gf had no stomach for the fellow hammering a nail into his nose, but by that point it was almost five, and my last piece was ready. About an hour later, I got a text that my most expensive commission was ready. I got a preview of it that night on Twitter though, so I knew what I had to look forward to...