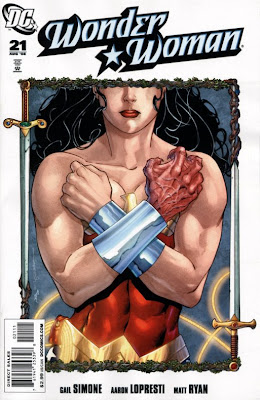 Hello again. It's Anj from Supergirl Comic Box Commentary. And once more, I am going to thumb through the long boxes and dust off some 70s DC Sword and Sorcery comics to review here at Bloodlines.  My interest in these comics took root in my youth when I would see visually interesting ads for these books in the 'safer' Superboy and Legion of Super-Heroes books from that time. But they didn't really bloom until Gail Simone's wonderful Ends of the Earth arc in Wonder Woman. Here Diana teamed up with all those heroes who I dreamed of reading.

And from the WW Earth arc here on Bloodlines, I reviewed Stalker #1 and #2. And I reviewed the wildly interesting and semi-bizarre Beowulf #1 amd #2. That left Claw the Unconquered as the only character from Simone's story that I hadn't covered ... until now.

I stumbled across Claw the Unconquered #1 recently and figured I should complete the set. 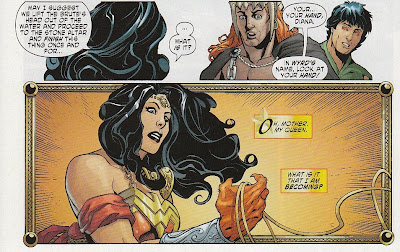 In Ends of the Earth, Diana is coerced by Stalker to save his soul by killing the demon warrior god D'Grth. To do so, she needs to team up with all these 70s characters ... Stalker, but also Beowulf and Claw. But Stalker is pulling the strings and isn't exactly trustworthy. During this adventure, Diana becomes as cold and bloodthirsty as Stalker and then as cursed as Claw.

In the end, the warriors come together as a team and defeat D'Grth.

But now, having read Claw, this panel where Claw warns Diana not to betray him, resonates louder. Claw doesn't trust her. Now I know why. 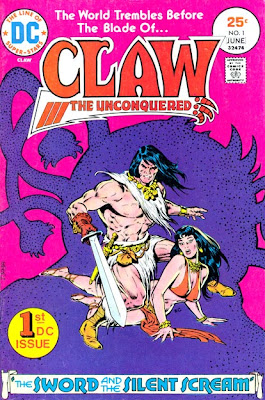 Claw the Unconquered #1 was released in the spring of 1975, one of a few sword and sorcery books out at that time, including Marvel's Conan books. The book was written by  David Michelinie, who also wrote the early Starfire books and got acclaim later on with Iron Man. Art is lavishly rendered by Ernie Chan. Chan's stuff seems tailor made for a barbarian book.

Having reviewed these DC offerings, I have to say I like this cover the most. For one, the bold use of electric pink really pops, grabbing the eye and really accentuating the darker purple monstrous shadow that Claw is standing in. While I think the red title gets lost amid the more garish surroundings, the logo itself is solid with the trademark red gauntlet anchoring 'the unconquered. Add to that the 'barbarian with big sword towering over (preparing to mount?) the near naked comely lass' motif which seems standard issue on these sorts of books and this cover is a winner.

The book starts off with Claw, whose name is Valcan, strolling through Ichar the throne city of Pytharia. He is barely covered in some fur which makes the crimson gauntlet he is wearing stand out. It seems out of place and clues us in that its use is more than protection of a sword hand.

As a newcomer, he seems a mark for a pickpocket who almost gets away with Claw's gold. Instead, the thief gets tossed through the wall of a local tavern, providing Claw an unorthodox entrance into the establishment. Within 2 pages we have learned a lot. He is hiding something with that gauntlet. He is incredibly strong. 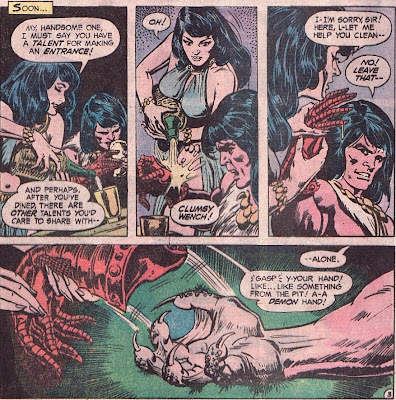 Michelinie wastes no time in showing us what is under that glove. A serving girl carelessly pours wine on the glove and when she takes it to clean she uncovers Valcan's secret and why he is aptly named Claw. His hand his a webbed demonic hand. No wonder he keeps it hidden.

The woman might have initially been flirting with Valcan, lavishing him with compliments of his good looks and battle prowess. But the sight of that hand sends her reeling a bit and shows where her true loyalty lies.

She immediately informs her master, Tarmag, about Valcan's demonic hand. There is a bounty on anyone with a deformed clawed hand and Tarmag intends to collect.

Tarmag gathers some brutes and attacks Claw in a dark alley. But Claw is very proficient in combat and kills the thugs. Tarmag barely escapes with his life. 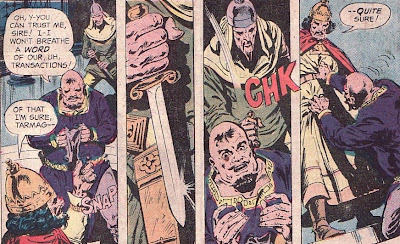 And if the bounty can't be claimed directly, Tarmag hope that information about Claw's existence can get him some coin. He heads straight to King Occulas, he of the yellow eye, and tells him that Valcan is in town and has the dread demonic hand. For that info, Tarmag is rewarded with a knife to the back.

It turns out that back when he was Prince Occulua, the king heard from his Wizard advisor Miftung that he will rule but that his time as King will come to an end by someone with a 'webbed hand like a dragon's claw.' Thus the bounty on someone fitting Valcan's description. 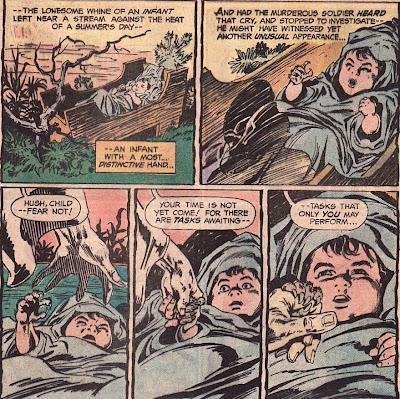 We flashback to Occulas' rise to power. First, he kills Kregar, a farmer loyal to King Occulus the first but also possessing a clawed hand. Prince Occulas wants to eliminate the prophecy before he even takes the throne.

Unfortunately, Valcan (then just a baby with a clawed hand) goes unnoticed by the assassins. He is rescued by a mostly unseen by definitely ghostly figure. So a nice little mystery is started. Who is this guy? And what does he want with Valcan? What did he do with him? 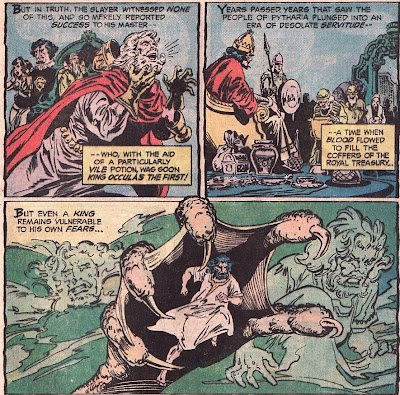 With Kregar killed, Prince Occulas poisons his father and ascends to the throne. But his hears of the clawed hand consume him.

I absolutely absolutely love that last panel. There would be many ways that Occulas' fears could be shown but this picture, the clawed hand engulfing Occulas, surrounding him, practically devouring him just wonderfully shows how suffocating this fear is. Just fantastic ... and why comics are such a great medium.

Back in the present, the serving girl who betrayed Claw earlier seems to help him avoid both the authorities (who want to question him about the murder of Tarmag's men) by taking him through the city.

She seem to be more trustworthy here, stating she wishes to thank Claw for freeing her from servitude under Tarmag.

Also interesting is that Claw has no recollection of his life other than the last few days. He only has a nagging sense that he is to play an important part in this world. Where was Claw all this time? Who trained him with the sword? Gave him the gauntlet? Sent him to Ichar? I wonder if any of the mysteries here are answered in subsequent issues. 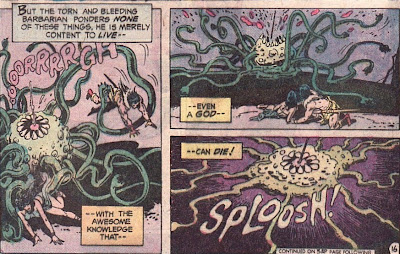 But the woman turns out to be traitorous to Claw again. She leads him to the Temple of Kann, where Occulas' right hand man Zedon has used a mystic gem to bring forth the old god Kann, a sort of Cthulu-lite tentacled demon.

Despite her treachery, Claw actually saves the woman from being eaten by Kann and then kills the god with a well placed spear. It is a nice page of small interlaced panel which bring a feeling of action to the battle. 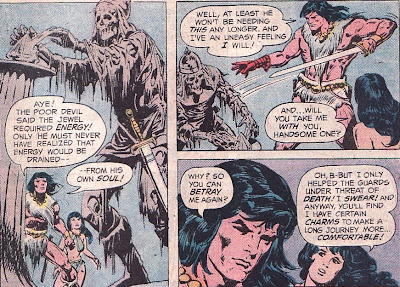 In another way of showing just how foul Occulas is, we discover that he sent his man Zedon on a suicide mission. Raising Kann cost him his life.

The woman has now failed her master and Occulas. She has no where to go and so begs Claw to let her travel with him. She even offers her 'charms' ... a way to make a long journey more comfortable. Ahhh ... feminine wiles. Despite having betrayed him twice, Claw can't resist such an offer. 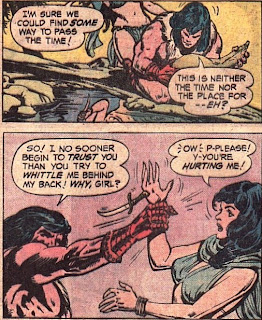 No surprise here. After a short reprieve of ... ahem ... comfort, she betrays him again. At a desert oasis, she tries to slip a dagger between his ribs.

And then Claw acts like a barbarian. She has betrayed him three times. Rather than kill her himself, he leaves her to the jackals of the desert and a presumed grisly death of being hunted and eaten. Brutal ... fitting. She has tried to get him killed three times in a couple of days. No wonder he doesn't trust Diana.

In the end, this is sort of your standard barbarian fare. Some common plot themes - unscrupulous dictator, man with no history destined to bring things right - are here. But the idea of the clawed hand adds an interesting layer, especially given that we get so little of what it means here in this first issue. We know much more about the villains in this book from this premiere issue than we do about our hero. He has a claw. He is a tremendous warrior. But we have no back story because he doesn't know it himself. Instead we know much more about who Occulas is here.

Ernie Chan brings a sort of more realistic style to the book despite the seedy locales and older gods present. Certainly this isn't the imaginative layouts we saw Ditko bring us in Stalker.

Still, this seems like a cookbook warrior book. It lacks the absolute zaniness and fever dream feel of Beowulf. It lacks the hook of the spurned soulless warrior and the dynamic Ditko art of Stalker. It doesn't have the hodgepodge sword and sci-fi feel nor the original character styles of Starfire (or Ironwolf - another book from this time period). Of all these books, I think Claw is the one that grabbed me the least. And that despite the great cover and the 'engulfing clawed hand' panel which simply stands out.

Fuschia is definitely underrated as a cover color that lays a tractor beam on the eyeballs. I wish the book offered more after attracting that attention, though. This one reminds me of Atlas' off-brand Conan fare like Wulf the Barbarian and Ironjaw. However, those were closer to the anti-PC insanity of Beowulf, where the claw here isn't much of a hook, and the story seems otherwise bog standard (down to employing a slumming Ernie Chan.) Hell, I started making these comparisons as I read, and by the time I reached the end, you'd noted them yourself. Preaching to the choir. I enjoyed your write-up, but as you said, it just leaves a body hungry for Stalker instead!

Well, after going to a recent con, both more Beowulf and Stalker are possibilities.

With Beowulf (of some sort) returning to the DCU, looks like I will be dabbling in 70s Sword and Sorcery a bit more.

But no more Claw.

Music to my ears, good sir!