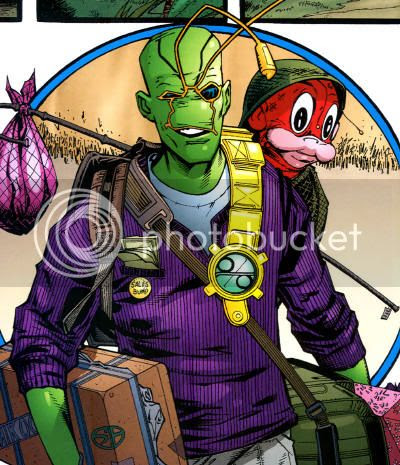 The beast left with the brick, nearly taking Father Rocky's hand with it. Robotman pursued, thrusting his arm down the beast's throat and retrieving the brick. Back at the airfield, Larry Trainor revealed that he had been practicing a technique in which he released his Negative Man form just enough to cover his physical body, allowing him to fight the pan-dimensional contractors. The new trick was not enough, as soon Larry, Rita, Cliff and Danny the Brick were at the mercy of their surveyor.

The Doom Patrol continued to play pass the brick, with Danny introducing itself to Rita, and Farr being freaked out about it. Finally, Robotman threw the brick across Oolong Island, where Crazy Jane carried Danny to a pleasant enough point for it to reorganized itself into "Danny the Bungalow." Danny then fired an imposter brick out of its fireplace back to the airfield.

The surveyor determined that due to this dimension's constant Crisis events, it was too stable to build upon and expect a profit. The dimension was condemned to use strictly for refuse dumping. The contractors then took their counterfeit brick and left.

Believing the matter closed, Jane and company wandered back to where the Doom Patrol were staying. An unwanted visitor then appeared before Danny with a "POP!" Ambush Bug and Cheeks the Toy Wonder had arrived to take up residence.

"Thick as a Brick" was by Keith Giffen, Matthew Clark and Ron Randall, with inker John Livesay. They offered a snazzy looking Bug without a line of dialogue, though he did wear a button emblazoned with the optimistic "Sales Bump." Not a bad storyline, but I think it would have been more entertaining in one issue, rather than in two.

I had dropped Doom Patrol by this point. Sounds like an utterly bizarre and fun issue! I'm starting to regret dropping this book and wish I'd stuck it out. :(