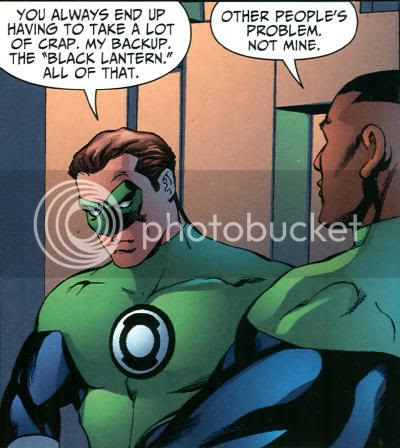 After Hal Jordan dropped the ball in a variety of areas related to the bachelor party of Ollie Queen, Batman stepped in to help out. This included asking John Stewart to decorate the Hall of Justice for the festivities.

At the party, Roy "Red Arrow" Harper gave Ollie a big hug and told Queen he loved him. The former mentor grumbled about the PDA, which his son Connor Hawke explained was a means of lowering "his score on the Kinsey Scale," coupled with "Sleeping with Black Canary. Repeatedly."

Green Lantern Hal Jordan took fellow corpsman Stewart aside to thank him for his help, and to ask if John would be alright with assuming his membership duties in the Justice League for a while. Jordan repeatedly stated his concern about dumping baggage and responsibilities on Stewart, but his concerns were just as often dismissed.
"You always end up having to take a lot of crap. My backup. The 'Black Lantern.' All of that."
"Other people's problem. Not mine... It doesn't matter who's carrying how much, just that somebody's got it."

Meanwhile, in Manhattan, the Jason Rusch/Gehenna version of Firestorm was following a "lead" on the disappearance of Professor Martin Stein that both parties were sure was a trap. True enough, as Killer Frost turned up to deal them some grief, but the transmutation of a warehouse floor into a pool of antifreeze cooled things down quick. However, Firestorm was then attacked by the trio of Lex Luthor, the Joker and Cheetah, who left the hero in critical condition as they absconded with Frost.

An army of villains, including but in no way limited to Fatality, Major Force, the Key, Cheshire, Skorpio, Sinestro and so very many more, plotted to essentially unionize to defend and preemptively attack super-heroes. Most of the Justice League fell to a series of ambushes, with Hawkgirl being allowed to escape to warn those remaining in the Hall of Justice of the attacks. John Stewart cradled Kendra as Superman declared, "You all heard the man-- the party's over!"

You can read this story from different perspectives at the following blogs: