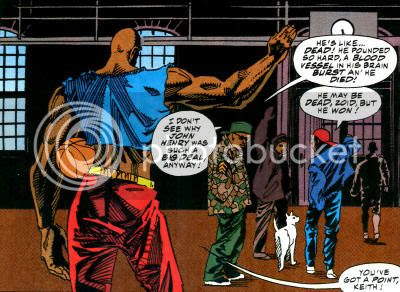 "Mr. Johnson," nigh on seven foot of solid muscle, but possessed of an obvious warmth, was entertaining a group of neighborhood boys on a Metropolis basketball court. Though dressed for game, Johnson was in storyteller mode, reciting the legend of John Henry. Afterward, Zoid talked about how he couldn't see the big deal about a guy working himself to death. His friend Keith explained "He went up against somethin' everybody knew couldn't be beat... an' beat it all the same! He's cool! Sorta like Superman!" Zoid figured Keith was just sold on the "production values" of Mr. Johnson's "Darth Vader" voice. It was the last thing he would say, as Zoid's young frame was devastated in a drive-by as gangbangers let rip with a high tech rifle.

Mr. Johnson bolted to guard the other boys from harm, carrying them to safety. No one else was harmed, but the kids were horrified by Zoid's smoldering skeleton. Johnson chased after the hoods on foot, cutting across an empty lot and leaping at their speeding sedan. Johnson wrapped his arms around the rifle that had been thrust out of the passenger window, warping it with his awesome strength. However, the driver rammed against a brick wall, leaving Johnson bleeding in an alleyway.

Later, Johnson was visited at the hospital by Keith and his mother, Myra (all gussied up for the occasion.) Keith wished Superman was still alive to deal with Zoid's killers, and Johnson told him the tale of how he had once met the Man of Steel. Working on a skyscraper and feeling low from past mistakes, Johnson was startled to see one of his fellows fall off a girder. Johnson grabbed a cable and swung out in time for the save, but the hook holding Johnson's line gave. Free falling from a deadly height, Johnson's sordid past flashed before his eyes... though it was not at an end, thanks to Superman's midair intervention. Johnson told the Kryptonian "I owe you my life," to which the hero replied, "Then make it count for something." Not long after, Superman was engaged in mortal combat with the otherworldly juggernaut Doomsday for the fate of Metropolis. Johnson tried to help, but ended up buried in rubble for his trouble. "I must've been a little out of my head, 'cause I clawed my way out, still thinking I had to stop Doomsday."

Released from the hospital, Johnson was troubled by his promise to Superman, Zoid's unsolved murder, and the specific instrument of death. Johnson stopped to chat with Rosie, the neighborhood fortune teller, before unlocking the basement below her building. There, Johnson began forging a suit of armor. "John Henry fought the machine and won. What I'm fightin' is a deadlier kind of machine-- one I helped put in motion. One I'm gonna stop... even if it kills me." 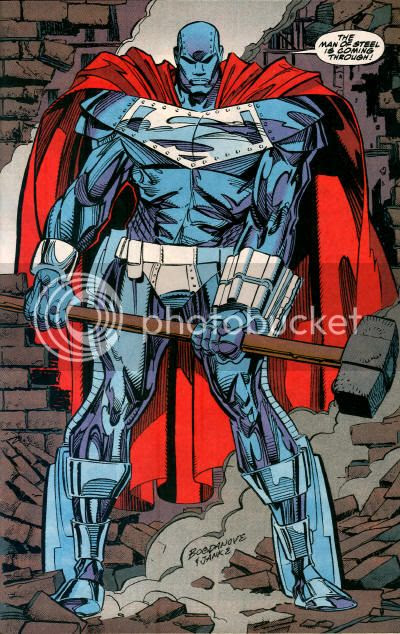 Meanwhile, the thugs behind Zoid's killing had followed Johnson home, and tossed a Molotov cocktail through the basement window. The old building lit up like a tinder box when the bottle struck an oil reservoir, and Rosie screamed for her life. Johnson donned his blue-gray armor, emblazoned with a Superman shield and flowing red cape. Impractical maybe, but when a sledgehammer pounded through Rosie's door, the ensemble made an impression. "The Man of Steel is coming through!" Rosie was carried to safety, and at first seemed to have tweaked to her savior's dual identity. However, as she later explained to reporters, what she actually thought she recognized was the soul of Superman having taken up residence in a newly available body. "Have you ever heard of a walk-in spirit?" Among the reporters was Lois Lane, who would find solace with her friend Jeb Friedman at this latest claimant to the resurrection of the man she loved.

Pa Kent was laid up when the news hit the television, and it set his battered heart racing. Alexander Luthor watched the reports with a very personal interest as well, dispatching investigators to follow-up on Rosie's claims. Luthor was also interested in Henry Johnson, and the super-weapons someone had begun circulating on the streets.

The new Man of Steel tracked down the creeps who killed Zoid, and crashed their pad. The leader, Dutch, blasted one of his own in half to get at the hero with his super-weapon. As the Man of Steel worked his way out of a caved in brick wall, still clutching the top half of the hood, he recognized the "Toastmasters... BG-80s... my design." Johnson flashed back to brutal killings in an oil state, U.S. military brass congratulating him on a job well done. While today bald with an earring, "Johnson" in the day wore glasses, a flattop, and a pocket protector on his suit. "Johnson" also remembered the death of his grandfather years earlier, blood having landed on a framed picture of Martin Luther King Jr. "Don't look, John!"

The Man of Steel came back strong, firing rivets from a wrist gauntlet that pinned Dutch against a wall. Questioning began, as Dutch gave up "the White Rabbit" as the supplier of his Toastmaster. Elsewhere, a trampy looking woman with white hair had a Toastmaster in her hands, and used it to assassinate Dutch from afar. The White Rabbit's helpers questioned the logic of not trying to take out the new Superman while she had the chance. "He's potentially more profitable than both of you combined."

Alexander Luthor's forces had only managed to learn the name "White Rabbit" after a day's effort, perhaps based on the number of bolt holes that keep her secure. Luthor would know more...

"Steel" was by Louise Simonson, Jon Bogdanove, and Dennis Janke. This was the first full appearance of John Henry Irons after his cameo debut in Adventures of Superman #500. It's a dynamic read, although the honkies responsible for the book could have maybe pulled back on all the words ending in apostrophes.
Posted by Diabolu Frank at 8:07 PM

When Simonson and Bogdanove were doing MAN OF STEEL, it was my favorite Superman title. I liked Bogdanove's Joe Orlando-inspired art. And Steel was the only one of the four Supermen I could give a damn about.

I forgot to mention, I picked up some Mort Drucker in there as well...