Earlier this month here at Bloodlines, I posted about my earliest comics, the beginning of my comics resume.
And I have to say, I love these stories about comic collectors. I always like to hear about how other collectors got started, why they love the characters they do, etc.

One story I thought would be cool to share is when I made the big jump in my mind from 'fan' to 'collector'. It was the late spring/summer of 1982. I was 12 years old and started doing the odd jobs that 'tweens do to make some pocket money. I was mowing lawns, stripping and painting sheds, washing cars, etc. And I was making what I thought was pretty good coin, pulling in like $35 a week. And with money ... my money ... in my pocket, I was suddenly in more control of my hobbies.

The first part of that leap from fan to collector was deciding that I would start collecting titles every month. Before I would spin the rack and look for cool covers to buy. I certainly had characters I enjoyed and often purchased but I never got 'every' issue of a book. But that changed. With the ability to go and buy my own books, I decided that I could truly follow characters.

The next part of that maturation to collector was taking better care of the issues. I used to read the comics, fold them and put them in my pocket, and when I was ready to 'store' them I would toss them into a big cardboard box. There were hundreds of them. But no filing, no order, no care.

That all changed in 1982. That summer I bought one of those phony wood grain cardboard boxes you see lawyers carry files in and a bunch of file folders. I didn't bag the books, but I stored them in that box neatly, by title, sequentially, and read them with some care.

Long boxes, bags, and backing boards came later. But that summer, I thought I was a fat cat collector with my special comic box. And I was ready to splurge. And what a great year it was for DC books. Here are the first books I truly collected. 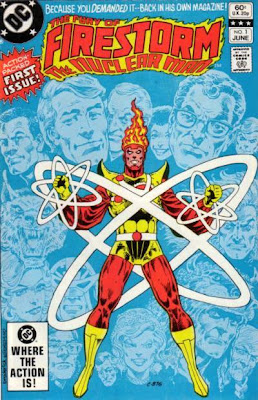 Fury of Firestorm - I first learned about Firestorm in DC Comics Presents #17 and then saw him join the JLA in Justice League of America #179. I thought he was a great character with an interesting origin and wild powers. And I loved Pat Broderick's art. Just fantastic stuff. I ended up buying Firestorm for the first several years of the title. 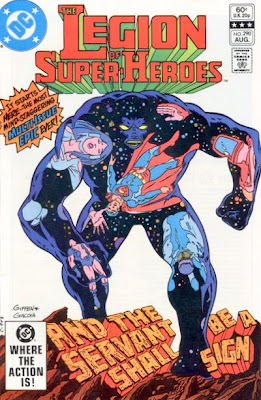 Legion of Super-Heroes - I already talked about how the Legion was my earliest book and subsequently a lifelong love. I was suddenly able to buy the Legion every month and what a time to jump on board. The Great Darkness Saga started around the time I made the jump. I loved Giffen's smooth organic look back then and Darkness remains a high point for the book. I mean, Wildfire vaporized and evil clone Guardian of the Universe in that story! 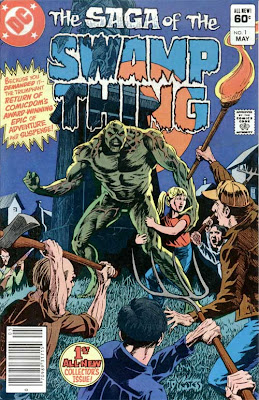 Saga of the Swamp Thing - Somewhere along the way I had been given one of the original Wein/Wrightson Swamp Thing issues and read it until the cover literally fell off. When a new Swamp Thing title came out, I jumped on board. What a crazy title this was, borderline Vertigo with Swamp Thing protecting a girl named Casey who (I think) ended up being a vessel to bring about the apocalypse. Filled with crazy horror stuff and religious overtones, I loved it. It may be that my penchant for Vertigo started here. 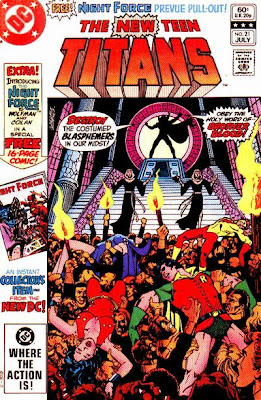 The New Teen Titans - Do I have to explain why? Wolfman and Perez were on their A game with this book. The storyline started here introduced Brother Blood. The Titans go undercover and join his cult and it doesn't end well. This was the beginning of some great stuff on the book including the intro to Blackfire, a trip into space, and a battle with the Brotherhood of Evil as well as the demonification of Raven. Great stuff, even now. And all the sadder to look back at given the lack of Donna and the behavior of Kory in the new DCU. 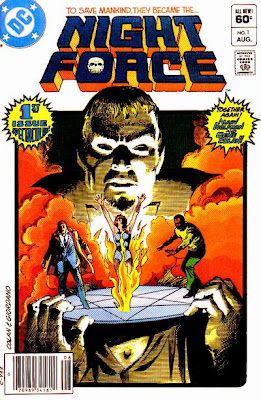 Night Force - I talked about Gene Colan and Night Force here when I talked about the passing of Gene Colan. I picked up Night Force because I liked the free 16 page preview in the above issue of Titans. It was another crazy horror comic with an unsettling ending to the first arc. So unsettling, I stopped reading it. It weirded me out. It was just the perfect time for me to read a book like that, when I could still be spooked.

And, of course, later that year another book came out ... 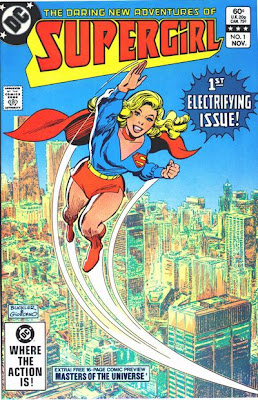 Daring New Adventures of Supergirl - The stories may read a little dated now but the characterization of Supergirl was spot on. She was consciously stepping out of Superman's shadow, becoming her own hero, and claimed Chicago as her town. I loved and still love that book.

So that was my leap from fan to collector. I think the next step of evolution ... to 'real collector' with long boxes, bags, and the lure of back issues probably happened 5 years later when suddenly I could drive to a comic store and not rely on the local convenience store. But that's a story for a later time.
Posted by Anj at 7:00 AM

$35 in 1982 dollars sounds pretty boss to me! You could have supported the better part of a company's line!

What inspired you to become so orderly with your books? For me, it was actually going to a comic shop and seeing how it was done. I don't think it ever occurred to me to organize my comics before that.

I was first exposed to Pat Broderick during his brief Captain Mar-Vell run in the late '70s, and while I've always loved his art, I rarely supported his books. Captain Atom was the only title with the right combination of character(s) and script to keep me following his work.

I enjoyed that first Brother Blood story arc years after the fact. They went back to that well too many times with too little variation, but it started off well.

I've had an unread copy of Night Force #1 lying around the house for a year or so. I think I read part of one random issue decades ago.

I tried some issues of The Daring New Adventures of Supergirl, but I think they were drawn by Carmine Infantino, who I just plain hate to this day.

Always a pleasure to read these, Anj!

Since I was committed to collecting these things monthly, I wanted to keep them in a more orderly way so I could refer back to older issues if I needed to. The easiest way to do that (back then) was to set up folders.

Only later did I discover the 'long box, bags and backing boards' and, like you, it was when I first went into a comic store.