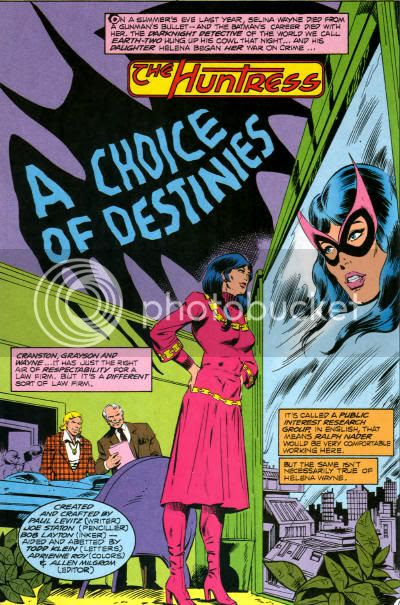 Cranston, Grayson and Wayne was a law firm based around public interest research along the lines of the work Ralph Nader made famous in his consumer advocacy. Cranston was the aged do-gooder with a painfully ineffective combover, while Dick Grayson was a partner in name only as he served as a diplomat. Helena Wayne was the third partner, fresh out of law school at 21. Roger Demarest was also at the firm, and didn't so much seethe as constantly explode over his resentment of Wayne's unearned status. A long haired sexist pig in a grotesque plaid suit (complete with a freakin' medallion,) Roger laid his feelings about Wayne having bought in abundantly clear. Cranston assured the hesitant Wayne that she was brought in on her established merits editing the law review and graduating valedictorian from Harvard.

Helena Wayne doubted not only her likely contribution to the firm, but also her efforts through it. As the daughter of Batman and Catwoman, Wayne had training that might allow her to do much more for the world than any single lawyer ever could. As such, she ducked out of the office to suit up as the Huntress and investigate the near constant cases of arson taking place in the slums of South Gotham. Swinging past lackadaisical firemen, she rescued three older citizens trapped in a burning building before barely escaping herself. The Huntress must have still been of "urban legend" standing or less, since the explanations of how the rescued survived were dismissed entirely by EMS.

Somehow having concealed an entire outfit in her form fitting uniform, Helena Wayne lingered at the scene, and saw a mystery man supplying a little boy with explosives and payment for his latest arson. Wayne lost track of both, and had a mystery on her hands...

This story from Batman Family #18 was by Paul Levitz, Joe Staton, & Bob Layton. It was the first solo story for the character since her debut/origin in DC Super-Stars #17, and it was not a doozy. The characters are lousy and broadly drawn, while the realistic inks of Layton combined with the caricature of Staton makes the male characters look like they have congenital disorders. The only thing duller than super-heroes battling common disasters is seeing them address them over multiple parts. It also tough to get wound up in Huntress' angst over whether to be a lawyer or super-hero, since guys like Daredevil do both, and it's a decision she probably should have come to before this point.


The Bronze Age
Posted by Diabolu Frank at 4:06 PM