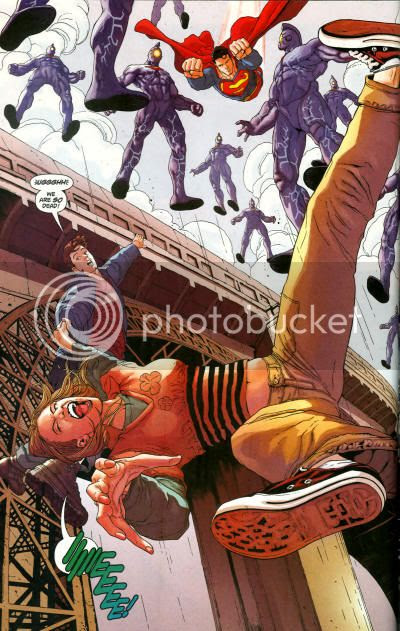 Michael Costner was asleep in the bed of a dingy apartment when an attractive young woman woke him up with a kiss. Vienna understood that Mike had these memory lapses, but didn't have time to jog it further. Superheroes or supervillains, both were on Mike's tail, so it was time to run. An OMAC burst through the wall, so the couple fled down a fire escape. Jumping for freedom, they landed in a convenient transport truck for chickens that drove off. Two other OMACs joined the first in being unable to figure out this impossibly clever turn of events.

Vienna explained that the OMACs were trying to take over the world, and saw Mike as their key to conquest. The OMACs had somehow erased Mike's memory, so his girlfriend had to be handy to remind him of the score. Mike's last memory was "trippin'" in Gotham, where he robbed people and bought drugs. Now he was in Las Vegas with an unfamiliar girlfriend who had helped him kick months earlier and flying robots in pursuit that could hide within any human being they encountered.

Several OMAC run-ins later, Superman showed up to hold off a pack until the JLA could arrive. Mike and Vienna caught a moment alone, in which Mike expressed his appreciation for finally finding someone who cared about him whom he could trust. Surprise! Vienna turned out to be an OMAC, erased Mike's identity, and dude woke up to find it was only a dream. Gah, not that old saw. Mike took a hit, and I could use one myself.

"OMAC" was by Bruce Jones and Renato Guedes. Whatever happened to Guedes, anyway? Every other artist in this book is still working-- well, except Justiniano, and that's a subject I'd rather not broach. Guedes was one of the prettiest and most fluid of the obvious photo-referencing crowd, and I can't remember his name coming up in a long time. It's also the only selling point of this story of the Keystone OMACs, turned from T-1000s for the super-hero set into clueless geeks outpaced by a nothing protagonist and his exposition dumping girlfriend. I'd say Kirby was rolling in his grave, but more likely the King couldn't even be bothered with a shrug in the afterlife over so slight an indignity, what with the thousands of others in the dust. Hope he liked Captain America: The First Avenger, at least.