I really liked reading the Comic Resume by Frank earlier this week and it made me think it would be fun to review my comic origins as much as I could. It isn't a big surprise given the blogs I am a part of that I am a dyed-in-the-wool DC guy and that predilection for the DCU can be felt in my earliest recollections.

I grew up in the era when comics where bought of a spinner rack at convenience stores. The comics I bought were often the ones whose covers interested me the most. I also was lucky enough to have a convenience store a block away from my home as well as from the summer house we lived in during July and August.

My earliest memories of comics are from that summer house. I read at a relatively early age and so my parents and older sibs would buy me comics. We also used to go to yard sales a lot in my youngest days and I would buy comics there for pennies.

So I can distinctly remember reading the following Superboy and the Legion of Super-Heroes comics at that beach house. These are the first issues I remember reading and I consider them my 'first' comics. These books were solicited in the winter of 1975, written by Jim Shooter and drawn by Mike Grell, and too early for me to have read and comprehend, and certainly not at a time where I would be in the summer place. So my guess it these were bought in the summer of 1976, probably at a flea market/yard sale.

These are some crazy issues, which may explain a lot about who I am. 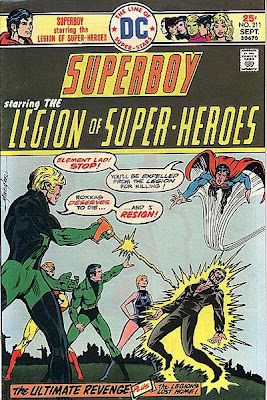 'The Ultimate Revenge' was the main story in Superboy and the Legion of Super-Heroes #211.

In that story, Roxxas, the villain who massacred all the inhabitants of Trom except for Element Lad, escapes prison and heads back to the planet. Element Lad, usually a reserved character, disobeys the Legion and goes off on his own to track down Roxxas with the plan to get revenge/justice for his people by killing the villain.

Roxxas lands on Trom and is confronted by Element Lad. The Legion arrives as the two square off, Superboy begging Element Lad to let the Legion take Roxxas into custody. Element Lad resigns and fires his laser pistol at Roxxas apparently killing him. It turns out that Chemical King wanted to see if Element Lad would actually go through with it. So he secretly sped up the chemical reaction in the blaster's battery, making it little more than a flashlight. To complete the illusion, King slowed down Roxxas' metabolism so he would collapse. The bottom line is Roxxas lives. 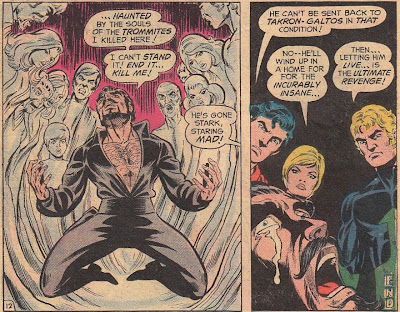 Surprisingly, the villain then begs the Legion to kill him. He fled to Trom hoping he would be killed because he cannot take being haunted by the voices of the Tromians he has killed, he is in psychological anguish for his crime.

So that is pretty crazy stuff for a 6 year old to read. A hero who would kill? A man begging to be killed because his sins plague him? A discussion on the chemical reactions in batteries??

But to this day I wonder why Element Lad wouldn't just use his powers on Roxxas. Why not turn him to salt, make him air, or something worse? I suppose the story wouldn't work that way. 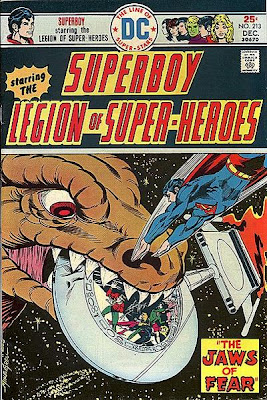 'The Jaws of Fear' was the main story in Superboy and the Legion of Super-Heroes #213.

In this story, a master thief Benn Pares decides to steal the Miracle Machine (a wish granting machine) from the Legion Headquarters. The first pages have him simply antagonizing the Legion by slipping in and out of their HQ stealing random things before telling them he is going after the machine. 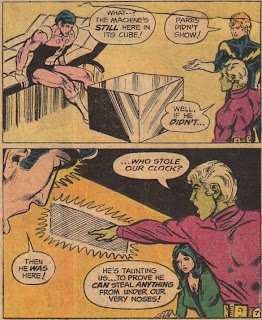 I can remember the scene where the Legion literally surround the machine to make sure it can't be stolen only to realize that the clock in the very room has been pilfered. Pares snuck in the room with them and got away with the clock. For some reason, that scene really stuck with me. It turns out Pares' power is to neutralize any defense system thrown in his way - he can become intangible, walk on air, change his core temp, etc to foil any alarm.

Fearing what he might do, the Legion decides the best course of action is to destroy the miracle machine. But all their beams and punches don't even dent it.

The Pares' secret lair is discovered to be in the mouth of a galactosaur, a sort of space dragon. The Legion flies to intercept, but Ultra Boy becomes too afraid to have the ship fly into the dragon's maw, having some PTSD over his own origin (Jo Nah, swallowed by a space dragon and getting ultra energies).

Superboy, left behind as a last line of defense for the Miracle Machine, wishes he could help and suddenly finds himself standing next to the thief. He punches him, ending the threat. It turns out when all the Legionnaires punched the machine, they accidentally turned it on. When Superboy wished to help, the machine granted his wish. Shrinking Violet wonders why they didn't just use the machine to wish him captured in the beginning but Brainiac 5 warns her that they cannot use the machine to get complacent.

Still a bit crazy, no? A thief that can foil all defenses? A wish granting machine? A hero terrified? A lesson not to use an ultimate power machine?

I have been a Legion fan ever since and found myself buying that book on a semi-regular basis even in my earliest years.And the Grell Shrinking Violet costume might be my favorite Legion costume ever.

So these were my 'first issues'. There are other moments on my resume I might end up posting about at some point, like when I felt I made the jump from 'fan' to 'collector'.
Posted by Anj at 7:00 AM

Did Element Lad get off on the attempted murder? Was he still a Legionnaire?

The Legion just ignored that it happened and he continued being a Legion.

He did express remorse immediately after pulling the trigger ... if that means anything.

Add ten years to the age and you're almost talking about me, Anj. In my case it was a convenience store across the railroad tracks from my grandparents' house where we would visit every Sunday afternoon. Ah, those were the days ... "You can have one funny book" and the agony of deciding which it would be. Probably why I gravitated toward team books - you felt like you got more bang for the buck - er, 12 cents. Hence _my_ devotion to the Legion from early on. Enjoyed reading your "Secret Origin," love your own _Supergirl_ blog. Cheers, Kent

Ah, those were the days ... "You can have one funny book" and the agony of deciding which it would be.

I remember those days as well, spinning the rack over and over looking for just the right impact cover.

Thanks for the kind words!