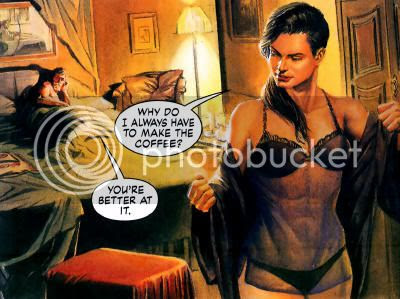 Lex Luthor, Poison Ivy, Black Manta and the Riddler, all in civilian garb, announced through holographic projectors in a host of languages that they were essentially taking over the planet for its own good. They also condemned the half-measures of Earth’s former heroes, who they claimed had abandoned their charges. Instead, the Legion of Doom had launched attacks of the super friends in their secret identities.

Bizarro burst through the ceiling of Clark Kent's apartment, and pulled Superman out to fight in the steets of Metropolis.

Hal Jordan was looking in his locker at Ferris Aircraft when Sinestro showed up to shove Green Lantern into another plane of existence.

The impossibly cut abs of the brunette Dinah Lance didn't save her stomach from doing cartwheels when the Scarecrow's gas caused her to see insects crawling about her apartment. A blond wig clued Ollie Queen that he was in for a serious night of sexing with Black Canary, until this version of a barely dressed Dinah began to melt and ooze all over him.

The Cheetah slashed at a Princess Diana turned Wonder Woman.

The Hawks and the Atom faced assassins at their respective workplaces.

Bizarro was bad enough, but then Solomon Grundy began contributing to the blows striking Superman. Brought to his knees, the Man of Steel was held fast, and began to be drained of life force and powers by the Parasite. Metallo's kryptonite heart further compromised Kal-El's health as he called out for help.

Barry Allen was on a date with Iris West at a nice restaurant when a JLA alert forced the Flash to his feet...

"Chapter Four" was plotted and painted by Alex Ross. The script was provided by Jim Krueger, and the penciled layouts by Doug Braithwaite.

When I first read Justice, I seriously did not know that was Black Canary. Becuase I thought she was a real blonde.

What? Six-pack abs won't save you from hallucinated bug attacks?! Damn. Okay, I can stop doing crunches now, because they're obviously useless.

I like when people draw Dinah with dark eyebrows. It's a nice tell. For the record, she switched from wigs to a dye job in the late '90s, so technically you were right.

I never even noticed what color her eyebrows are. D'oh.

See...this is why I like the Silver Age, when the most obvious of details are spelled out to the reader. I kind of wonder how that scene from Justice would play out, written in Silver Age style....

"Dinah Lance, who is secretly the high-kicking heroine men call Black Canary, slips on a silken night garment in anticipation of the amorous advances of the emerald archer Green Arrow, in his secret identity of millionaire playboy Oliver Queen.

"Editors Note: A poll in the popular READER'S DIGEST magazine confirms that brewing coffee certainly is a strength of the fairer sex!"