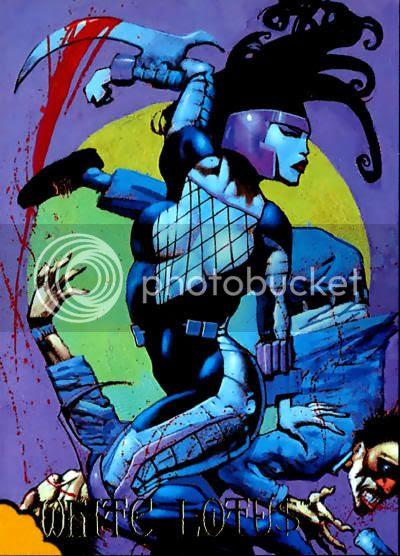 Dark Judgment was a weird ass trading card collection. Most comic sets focus on their most popular heroes, then something like half as many of their most popular villains, then the (often new) characters the company were pushing to promote. Dark Judgment was an all painted set of nothing but super-villains, which even the the blackest days of the '90s was a dodgy proposition. Again, you had the top dogs of universal atrocity, your second stringers who were currently active, and then you've got White Lotus.


Keen of eye and steady of hand is Miyeko Yanamoto, the White Lotus. Obviously, this Lotus is no delicate flower... Her body armor is a miracle of high-tech ordinance. White Lotus fancies herself a ninja for hire but still follows a tiresome code of honor. She'll have to drop that, if she's to work with me.

I was hard core into the DC Universe in the mid '90s, and I drew a total blank. I checked at ComicVine, and the only White Lotus they had a listing for turned up four years later as a member of the Supermen of America, individually or as a group eligible for a listing under Bitter Andrew's Nobody’s Favorites, if they haven't already (note to Weiss: please add a search engine or something, for archival sake.) Wikipedia and Google searches were similarly unhelpful. Finally, the Grand Comic Database turned up a White Lotus from 1994, although her alter ego is listed as "Nona Lin." While more important and much longer lived villains went unnoticed, the featured antagonist of two issues of the Chase Lawler Manhunter series got a painted card by Simon Bisley.

I'm not the only blogger relishing New Year's Evil this week. Find more malicious pin-up fun at the following: