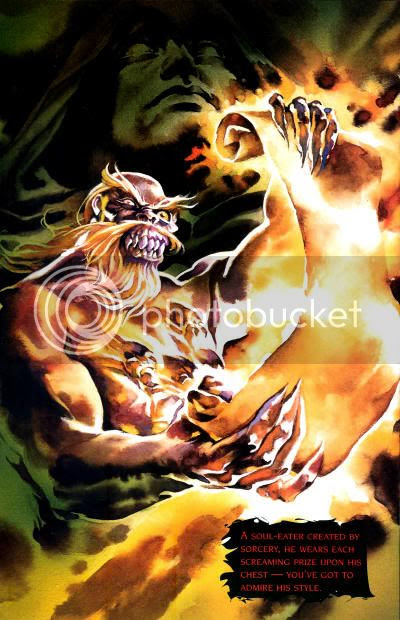 Freddy Krueger was a hugely popular pop culture icon in the 1980s, and while the he helped usher in the sadism of modern comic book villains, it's surprising he doesn't have an actual analog of note. There were dream-based bad guys before and after him... disfigured creeps... slashers with unusual weapons (including bladed gloves,) yet nobody in comics ever quite pulled it together to create a quasi-Elm Street killer for super-hero comics.

The closest I can think of is Dementor, which phonetically alluded to his being a demon, but in print peed on the dictionary. Dementor helped create and torment coma victims, and pretty much remains Green Lantern Guy Gardner's only archenemy. I'm sure Hal Jordan still has a special place up Guy's ass, and Major Force was borrowed from Captain Atom for a while, but Dementor is the only guy that really got the job done.

You see, when Guy Gardner became too popular not to exploit with his own series, but too detestable to attract a large following, it was decided to turn the unbalanced bastard into more of an "aww shucks" Yancy Street tough. However, Guy had been such a sociopath, a retcon was needed to get Gardner off the hook for his misbehavior. Hence, Dementor became the architect of much of the worst of Guy's life through induced mini-comas and otherwise manipulating the people of Gardner's world. Then, once Gardner found himself in a real deal coma for years, Dementor tortured his restrained consciousness until he became the a-hole fans loved to hate.

Dementor's coma fantasies played out almost exactly the same as Freddy Krueger's nightmares, and their sarcastic gallows puns were virtually identical. Dementor was just a brawnier, hairier, and more hillbilly variation. Like Krueger, I enjoyed the dude in small doses, and kind of wish someone would get some use out of him today.

I'm not the only blogger relishing New Year's Evil this week. Find more malicious pin-up fun at the following: