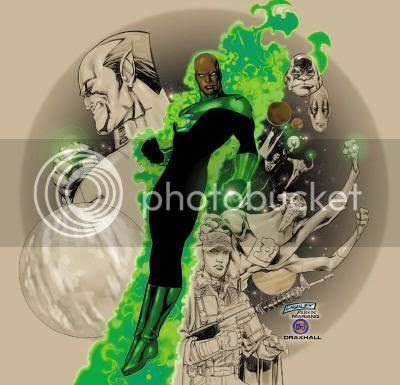 I felt bad about leaving out characters that didn't fit onto my other Ultimate DC blog posts, so aside from the John Stewart spotlight, I'd like to reference them here.

Ultimate Superman was designed by Ken Lashley. The Wizard Staff only offers "After Smallville" as their take on a newly active Man of Steel. He's even still dating Lana Lang long distance while setting up in Metropolis, which the TV show moved past a year or two after this.

Ultimate Flash was also drawn by Lashley. The Wizard Staff brought back Barry Allen as C.S.I. in Los Angeles, mentored by homicide Detective Jay Garrick and aided by District Attorney Iris West. Like Tower Comics' and Deluxe Comics' Lightning, this Flash is prematurely aging because of his powers, and he's on the hunt for a serial killer (Murmur.) The twist is that there's a Black Flash around... the Wally West of the future! Ouch. Whimper.

Finally, there's our Ultimate Green Lantern, dishonorably discharged Delta Force operative turned social activist John Stewart. Ethan Hawke and Denzel Washington switch roles in "Training Day," with the black rookie uncovering the corruption of his superior officer in the GL Corps, Sinestro. As it turns out, Sinestro murdered all the Guardians, and has been secretly giving unworthy parties Green Lantern rings until he can kill them as well. Then, with his Manhunter robot army, he can conquer the galaxy! I swear Ken Lashley didn't draw all of these, but he covered each of the ones here.

You have a wonderfully informative blog, I'm glad I found it!

Thanks, Laz! Those Plastic Man villain bios are mostly thinly disguised story synopsizes, but I get a kick out of them, and I'm glad you do to.