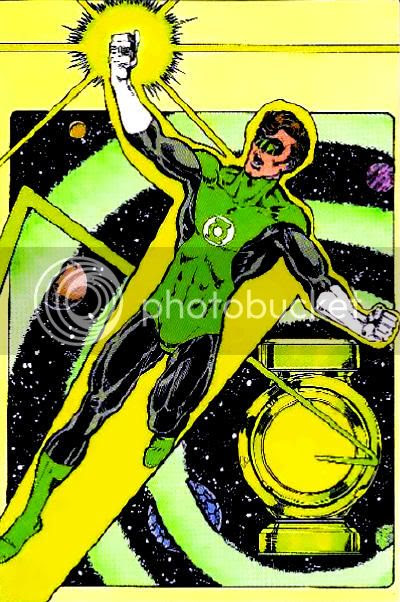 Absolutely without fear, the Emerald Crusader, Hal Jordan, was given the magnificent ring of power. Green Lantern serves the Guardians of the Universe as one of the famed Green Lantern Corps, fighting evil in all its forms.

Green Lantern Hal Jordan was one of the first super-heroes I ever encountered, but he had about the least presence of them all. He was a Super Friend, and I would catch one of the old ‘60s Justice League of America shorts every now and again, but it’s not like he had his own cartoon like Aquaman. The earliest comic I saw Hal Jordan in was from the Hard-Traveling Heroes days, involving a generic cult that kidnapped Green Lantern, but his ring had managed to reach Green Arrow. It was a gorgeous looking comic, and even though Jordan was the jobber of the tale, I didn’t hold it against him that time.

When his Super Powers Collection figure came out, it was instantly my favorite. Hal was too barrel-chested, and his lantern jaw too similar to Superman’s, but the glorious costume design of Gil Kane rendered in three dimensions could not be denied. The simple color scheme of green, black and white came off as so much more refined than the standard hero fare, and a domino mask has an air of sophistication about it. Most heroes had black hair, and quite a few were blond, but brown was a unique shade reserved for a select few (with heavy hitters Peter Parker and Bruce Banner also so graced.) I think my favorite part was that drop of emerald jewelry amidst the negative space of Green Lantern’s white glove that only hinted at the incredible power resting on his finger.

I’m sure I encountered Hal sometime in the interim, but my next strong memory was from the mid-80s, in an issue of Green Lantern with the Javelin as the featured villain. I believe the character was designed by Dave Gibbons, and he looked good, but what really stuck with me was how a dude with a hollow javelin filled with yellow paint had managed to place Green Lantern in a life or death situation. Hal‘s vulnerability to a color was already a joke to me by then, and his diminishing presence in the DC Universe didn’t help. John Stewart seemed to handle his ring with much greater competency, and Guy Gardner had loads more personality than either of them. Hal would pop up here and there, like in Millennium tie-ins, but he had already become my third choice and falling in the role of Green Lantern. In fact, it kind of ticked me off that Stewart’s wife was killed because he was among the majority of GL corpsmen who lost their rings at decade’s end, excluding Hal, who was written as a total douchebag in his Action Comics Weekly run. I gave Hal several more tries in the years that followed, which only led to several more fails on Jordan’s part.

The first comic book professional I ever met was Bill Willingham, who turned up at a convention shortly after drawing a chapter of “Emerald Twilight.” I told him Hal Jordan didn’t mean that much to me, but I thought it was wrong that fans had invested over thirty years into a hero before having him become a mass murdering madman. If I recall correctly, Willingham was either diplomatic or simply agreed with me, so we moved on to discussing The Elementals and how nice Terry Austin’s inks looked over a Huntress short story he’d done in a recent Showcase.

I continued to irregularly follow Green Lantern in the late ‘90s, because that book was always having guest stars over that I found more interesting than Kyle Rayner. I also went back and read Denny O’Neil’s work in the ‘70s, as well as Steve Englehart’s in the ‘80s, and came to the conclusion Hal‘s going nuts was actually foreseeable. Jordan was indecisive and open to suggestion, was prone to erratic behavior, made colossally stupid decisions in dramatic fashion without regard for the consequences, and basically was a screw-up with more power than he deserved. Fans fought over the new status quo, but for a decade DC insisted that Hal Jordan was and would always be the very evil Parallax, which I accepted. Even when Hal sacrificed his life to reignite the sun and eventually became the Spectre for a time, I was alright with it. Only when DC announced that Hal Jordan would be reborn as Green Lantern did I have reservations. There were plenty of theories as to how this could be done, my personal favorite being that evil Hal had been a clone created in a Guy Gardner story right before going nuts as Parallax, but things played out different. The real Jordan had done all that evil, only under the influence of an extraordinarily powerful alien entity. Now see, heroes get possessed by evil all the time, and Kyle Rayner specifically would be in this creature’s thrall a few years later. However, like most heroes in those circumstances, Rayner had regained his autonomy after a few issues, not a dozen years following a massive body count. Even that was slowly retconned, with Coast City, Kilowog and even Arisia (killed by Major Force in a completely unrelated story) brought back to life in as arbitrary a fashion as possible. What they were selling, I wasn’t buying.

Here we are in 2010, with next summer promising a big budget Green Lantern motion picture that I personally have little interest in seeing. For the second time in the Geoff Johns era, John Stewart has been promised a co-starring role in an ongoing series, only to become a bit player supporting a boring honky lead. In fact, Twitter was all atwitter about why a white guy was playing Green Lantern after a generation of fans had been turned on to the character outside of comics by a black GL in the Justice League cartoon. DC Comics spent most of my life cultivating a hatred of Hal Jordan, and I’m afraid it will take a lot more than Warner Brothers throwing millions of dollars at a Ryan Reynolds vehicle to change my opinion.
Posted by Diabolu Frank at 5:32 AM

I myself have never been much of a Hal fan, but I do think Geoff Johns has rehabilitated the character enough through his clever retconning. If you think about it, Green Lantern since the silver age has been the least rebooted property (aside from perhaps the Flash) in the DC Universe. I follow Green Lantern despite Hal. Fortunately for Green Lantern there are any number of side characters and alternate Lanterns like Guy Gardner (my personal favourite) that Hal doesn't need to be much more than an introduction to the corps mythology. The Hal Jordan origin story would make a good movie IMHO, and paves the way for John, Guy, and Kyle eventually as well.

Yeah, I don't have a problem with Hal paving the way to the movies, but what I've seen of this specific movie leaves me cold.

I'd say Hal is the most successful of the Silver Age properties who retained their core continuity, and I feel he's got the best origin story. Most of Aquaman's Silver Age history remained intact, and it looks like Johns is restoring much of what was lost in Brightest Day. On the other hand, Jeff Lemire is the first guy to really screw with the Atom's history, which I doubt will stick, as Ray's lost virtually nothing from his fifty years of activity.

Yeah, you are utterly wrong in just about every sentence you wrote. You're blaming Hal for the writing of crappy 1980s and 1990s fans-gone-pro. You should be blaming the crappy writers, including Denny O'Neil in the GL/GA days for turning GL into dreck.

Matt, I've at this point read hundreds of comics featuring Hal Jordan across his entire publication history, including dozens since I wrote this post six years ago. I don't like him written by anyone. He's a tool. I like every other Green Lantern better. I'm not interested in being "won over" by him, and I'd frankly feel guilty if I did because his history is still filled with him being a creep. No sale.