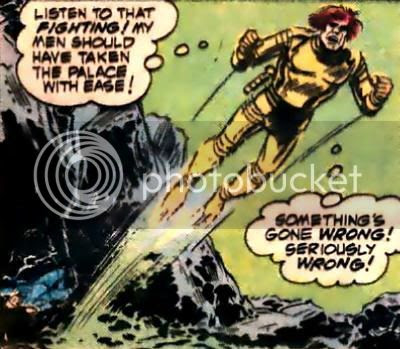 The Russian Boris was one of the first recorded members of the acclaimed international World War II aviation aces known as the Blackhawk Squadron. Boris was accepted as a friend by teammate Chuck Wilson, but was distrusted by other members, and vanished without explanation early on. Well after the war, it was revealed that on an early mission raiding the island lab of the enemy scientist Professor Distov, Boris was caught in an explosion and left for dead.

Unbeknownst to his fellow Blackhawks, Boris had been exposed to a form of anti-matter energy Distov had been experimenting with, which protected and transformed the Russian. Boris was then drawn to another source of anti-matter, found within Mount Sebastion in the South American country Santa Culpa. This source renewed the strange new powers Boris had acquired, so he remained in the country. Boris worked with Professor Ortega to create a battle suit to help him wield the energy under the title Anti-Man. Not only did Anti-Man become the head of a rebel army in Santa Culpa, but he even conspired with President Carlos in his plot to overthrow the government.

Fearing his former comrades in the Blackhawk Squadron might interfere with his plans, Anti-Man began to harass and kidnap members of the group. Before Boris could gather the entire team and work out a suitably diabolical revenge, the Blackhawks in Santa Culpa managed to escape and route Anti-Man's coup. Having been abandoned by Carlos and having murdered Prof. Ortega to protect his secrets, Anti-Man was forced to face Blackhawk and Chopper on his own. Despite his powers, Boris was beaten into submission and captured. Preferring death before further dishonor, Boris caused the anti-matter in Mt. Sebastion to erupt, seemingly taking him with it. The Anti-Man has not been heard from since.

With his anti-matter powers, Boris managed to survive a deadly explosion, presuming that was not the very source of his abilities. Afterward, Anti-Man could fly and fire "anti-blasts" of energy from his fingertips. Anti-Man was still physically susceptible to conventional attacks, so he wore a suit of armor for protection.

Created by Will Eisner and Chuck Cuidera
Posted by Diabolu Frank at 1:10 AM

Labels: Blackhawk, Who's Dat: The Codicil Directory of the DC Residuum