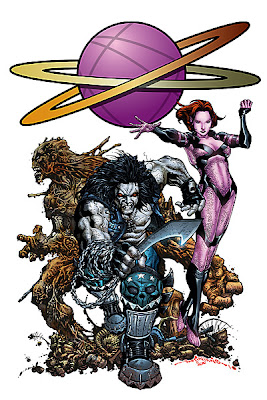 A while back I agreed to be a partner here at DC Bloodlines, a contributor looking at the wonderful world of the DCU. After a couple of posts however, I have become something of a slacker, a member in name only, the equivalent of a friend who sleeps on the couch, lives in the apartment, but doesn't help with the rent. A New year's resolution of mine is to start posting here more.

And why not get a jump-start on the new year and my resolution?

DC recently solicited a 6 issue mini-series title Weird Worlds, the first issue coming out the first week of January. The cover is posted above; here is the official description.


Each month, you'll be treated to new 10-page chapters in three exciting serials. In this debut issue, Kevin Van Hook and Jerry Ordway bring you the continuing adventures of Lobo, everyone's favorite Czarnian (after all, he's the only one left, so he'd better be your favorite). Aaron Lopresti introduces you to his newest creation, the kind-hearted monster called Garbageman. And Kevin Maguire takes you to the farthest reaches of outer space with the introduction of a hero called Tanga!
Now two of my favorite creators are working on this book. I love Aaron Lopresti's work and thought his Wonder Woman was about as close to perfect as you can get. And Kevin Maguire is simply fantastic.
But this isn't the first Weird Worlds that DC has published. And that's one of the things I like about DC, this sense of tradition. 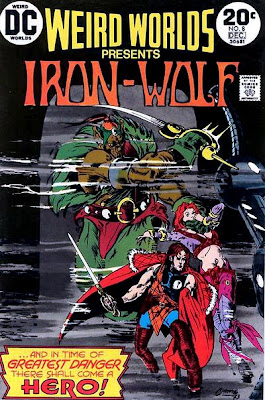 In 1972, DC published the first Weird Worlds, a short lived science fiction title that lasted only 10 issues. The first 7 issues were comic versions of Edgar Rice Burroughs' characters such as John Carter, Warlord of Mars. But the last three issues were headlined by Ironwolf, a character created by Howard Chaykin.

The Ironwolf stories in Weird World's 8, 9, and 10 read like a Who's Who of talent. Chaykin plotted and drew the stories. Denny O'Neil scripted Chaykin's plots. And Walt Simonson was the letterer! The stories are simply jammed with so many ideas that you get the sense that Chaykin had a complete universe in his mind. Wildly imaginative and understandably rough in some spots, the stories are like looking into the laboratory of Chaykin's mind, seeing some themes that run through many of his subsequent works. 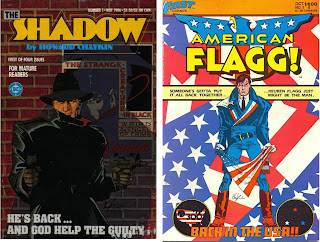 But I am a huge fan of Howard Chaykin. In the late 80s I discovered Chaykin's work - The Shadow, American Flagg, and Blackhawk. They were complex stories, with layers on layers. They were sexy, something my mid-adolescent self thought was unbelievably fantastic. And Flagg and Blackhawk were world-weary 'heroes' who felt betrayed by all sides despite being 'good men' at their core.

The Flagg stuff was just about the best thing on Earth for me back then (and still is now) - filled with politics and actions, as well as stunning art and snappy dialogue. With three home runs in a row, I decided to hunt down as much of Chaykin's past work as possible - the Atlas Comics' Scorpion, Marvel's Dominic Fortune, and DC's Weird Worlds. And I have since collected Chaykin's subsequent stuff. 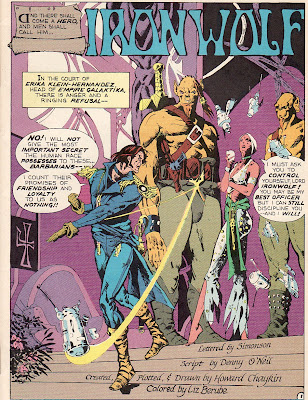 Ironwolf is a lord from the planet Illium, a world with an incredible natural resource, anti-gravity trees that are used to build space ships. Illium is one planet within an Empire, ruled by the beautiful but wicked Empress Erika Klein-Hernandez.

Being a man of honor, Ironwolf doesn't want to share his world's trees with the Empress' barbarian hordes who will simple invade and conquer. When the Empress commands Ironwolf to relinquish control of the forests, Ironwolf makes a snap decision. He rebels, slaughtering the barbarian troops there, and escaping. 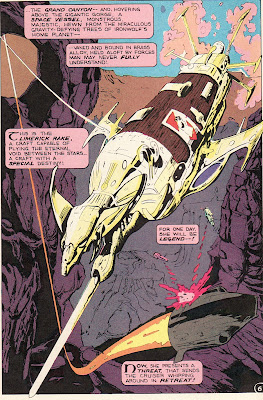 There is definitely a nice mix of both science fiction and fantasy throughout the series. Wooden space ships?

Ironwolf's ship is the Limerick Rake (Chaykin always did have a nice sense of wordplay) and looks more like a pirate ship than a galactic cruiser. The 'sword' at the front of the ship is actually seen ramming other ships. 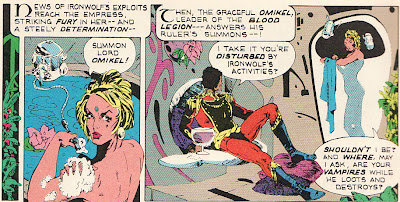 With a righteous fury, Ironwolf starts to attack the Empress' troops any time he can. He and his crew are skilled warriors and seem to be racking up victory after victory. Finally Empress Erika calls in her secret weapons - The Blood Legion and their leader Omikel. The Blood Legion are a troop of vampire soldiers, loyal to the empire and incredibly strong.

So science fiction, a pirate theme, and now vampires. Quite a nice concoction that Chaykin is creating here. Moreover, as with most of Chaykin's work, there are plenty of beautiful strong women throughout the books. 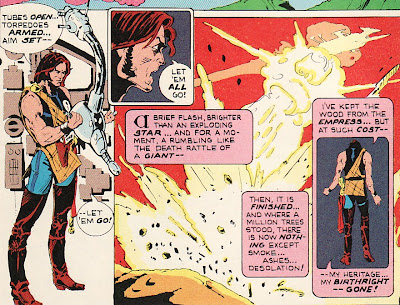 Heading back to his home planet, Ironwolf discovers that his squeamish and foppish brother has lied down with the Empire and has ceded the anti-gravity forests to the Empress.

Rather than allowing the trees to get in the hands of fascists, Ironwolf actually destroys his legacy, his birthright. He burns down his world's forests! Nice panel work here, Ironwolf small, confined to the prison of the panel, back to us, shoulders slumped. But it also shows what a man of conviction he is. This unwillingness to cross personal ethical lines and the ability to sacrifice things to accomplish bigger goals are common characteristics of the best Chaykin characters.

And the Scottish togs add to the feel of the book. There is a medieval sort of feel to the politics here ... lords and ladies, landed gentry, etc. Ironwolf seems more the rogue and outlaw dressed like this. At the end of this first issue he has officially joined the rebel forces, working with comely rebel Captain Sheba O'Neal, and determined to bring down the Empire. 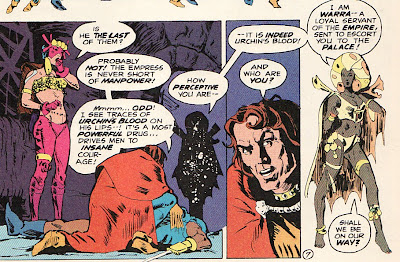 The second issue's story involves Ironwolf trying to assassinate the Empress by impersonating an actor and playing Hamlet for her in a private showing.

Again, Chaykin sort of floods the stories with small flourishes that add to the complexity of the world. Here we learn of Urchin's Blood, a drug that drives men insane with courage.

The plot fails and one of Ironwolf's comrades gets killed in the process. 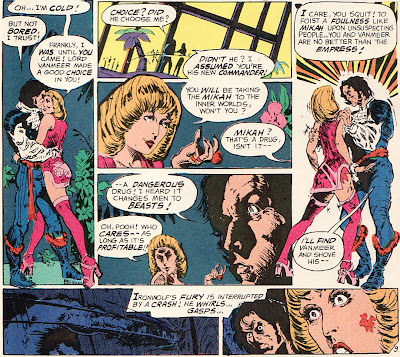 The last issue has Ironwolf on the run, fleeing to a rebel world to repair the Limerick Rake. This world is the home world of Janus Vanmeer, a noted rebel leader.

These rebels turn out to be just as bad as the empire. The planet's ruling family is peddling Mikah, an addictive drug which turns men into mindless giants. Are you a good guy if you are working with drug dealers? Are you rebelling if the underlying reason is to secure a bigger drug market for profit? Ironwolf wants no part of it.

The issue ends with the discovery that rebel leader Janus has been using Mikah and is now a grotesquely muscled brute. Ironwolf barely survives a skirmish with Janus, killing him in the process. 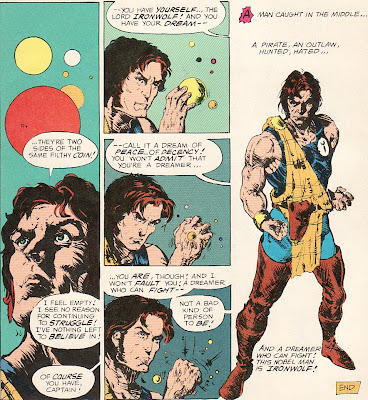 The last page of Weird Worlds #10, the last issue of the title, sums up Ironwolf's character - and most of Chaykin's best protagonists: Cody Starbuck, and Reuben Flagg, and the Midnight Men, and Harry Kraft of American Century.

Ironwolf feels like he is battling a corrupt world from all sides. He is a dreamer ... a dreamer of peace and decency ... but he is a dreamer who can fight. That is the quintessential Chaykin hero. 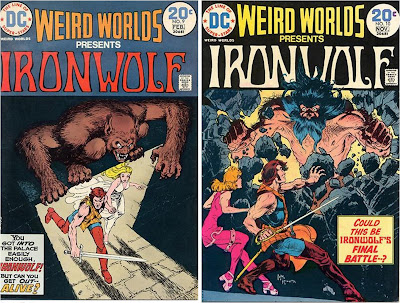 Here are the covers to the other two issues of Weird Worlds that starred Ironwolf. Weird Worlds #10 sports a very nice Mike Kaluta cover.

These books are sort of cherished by Chaykin fans, the petri dish of his later stuff. They can often be found at conventions cheap, sometimes in the 50cent boxes. 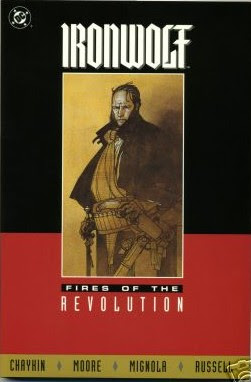 Chaykin came back to the Ironwolf character in 1992, co-writing Ironwolf: Fires of the Revolution with frequent collaborator John Francis Moore. This one shot graphic novel again sports incredible talent. Mike Mignola penciled the book and P.Craig Russell inked it. Some of the events of these Weird World stories are recapitulated here but it also brings the story to something of a close. This work melds nicely with the Chaykin/Garcia-Lopez mini-series Twilight, re-imagining the other silver age space heroes like Tommy Tomorrow and Space Ranger, another very good mini that can be found cheap.

If you are a Chaykin fan of any level, I would definitely look for the Weird World issues. In the late 1980s, DC collected the three issues and reprinted them in one book. That is simply titled Ironwolf and is probably just as hard to find as the original issues.

Chaykin's later works all seem like echoes of the ground-breaking stuff on the late 80s and early 90s.  But there is usually some glimmer in them that keep me coming back. So I have read Bite Club, his Challengers of the Unknown, City of Tomorrow, and the more recent Dominic Fortune. Still, of all those recent stuff, I am still more apt to reread Ironwolf or Flagg or The Shadow or Twilight.
Posted by Anj at 12:00 AM

Anj, this is more like that buddy's apartment where you can crash whenever you like. The rent's already paid, friend!

Anyhow, I love Howard Chaykin's art, and I want to enjoy his writing, but I almost never do. Aims at sophistication too often fall short, into the land of smug and sordid. You mention Twilight, a series I hated in spite of having little-to-no investment in the characters prior to their revisions. I covered that book a while back elsewhere, and might ought to represent it here closer to the Christmas lull.

It's weird seeing Chaykin at this formative stage, strongly resembling contemporaries like Kaluta and Simonson. In a few years, nobody could ever confuse any of these guys with one another! I can see a lot of Ironwulf in Mike Grell's Starslayer and Jim Starlin's Dreadstar, both series I have no small amount of affection for. DC really ought to collect all this material into one definitive edition, if not for Chaykin, at least for Mignola!

Great post! This is exactly the kind of off-the-beaten-path material I love seeing on this blog.

Chaykin shows you can have all the elements of Star Wars,Conan and Errol Flynne pirate movies,but if you no sense of story and thumb up your rear,you can write and draw pages of unrelentless crap.Weird World and Ironwolf: Fires of the Revolution shows DC Comic will print anything,whether it's quality or not-in this case not.