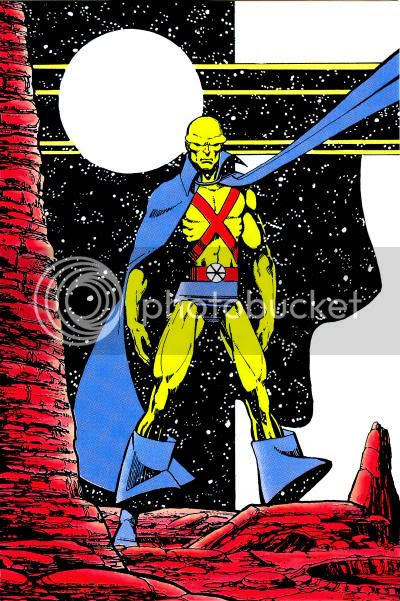 THE MARTIAN MANHUNTER
Brought to earth by the ill-fated Professor Erdel and unable to return to Mars, J'onn J'onzz adopted human form. His powers include telepathy, super-strength, flight, and invisibility. His only weakness: vulnerability to fire.

I'm not 100% sure how I was introduced to J'Onn J'Onzz. I suspect it was either DC Comics house ads circa 1984, or my having bought a heavily discounted Super Powers Collection action figure. I loved that toy, and was given a more thorough feel for the character through his appearance in Crisis on Infinite Earths #7. A saleswoman at Waldenbooks thought I was just too cute in my raggedy Houston Oilers jacket, and gave me the comic for free just before I went on a trip to Colorado Springs. Not only did the Martian Manhunter come off well in the double-sized issue, but in my mind he would always be at his coolest when drawn by the master himself, George Pérez. Also, Supergirl died, but that stuff never takes.

There must be something about the nomadic Martian, because a dinged copy of Justice League International #8 was one of the last comics I read in Texas, and a guest appearance in Action Comics #595 was among the first comics I bought when I arrived in Nevada. I'd tried Martian Manhunter#1 in 1988, and was not amused, so I tended to discount any further J'Onn J'Onzz solo reading. I followed the Martian Manhunter's appearance irregularly for years after that, mostly as a result of being a Justice League fan. Alternately, I started buying Justice League Task Force for its Nightwing appearances, and the post-Zero Hour J.L.A. for Wonder Woman and Hawkman.

Despite lots of good stories and nostalgia for my action figure, I didn't truly become a diehard fan until 1996, through Mark Waid, Fabian Nicieza, Darick Robertson & Jeff Johnson's Justice League: A Midsummer's Nightmare mini-series. It was like a therapy session had unearth repressed memories. Something about the moment where J'Onzz's family is taken from him again hit me with a tidal wave of emotions related to years of accumulated stories. I was an old lady sitting on the bus sucking humbugs, finally realizing I was a Rider on the Storm. I was a J'Onzz Fan, man!

JLA and my introduction to the information superhighway soon followed, and upon learning there were no Martian Manhunter fan sites on the internet, I resolved to one day build the first. It took me a couple of years to get started, by which time a few sites had emerged, but they're long gone now. My Martian Manhunter: The Rock of the JLA lasted a couple or three years, and was a major learning experience. Three years ago, inspired by Rob Kelly's The Aquaman Shrine, I decided I would reconstitute my old site material into a daily blog. The Idol-Head of Diabolu has, to this day, barely touched any of the old material. This is one part because I'm a dimwit masochist, another part due to my becoming a better writer, and yet another part due to the format freeing me to go into both deeper and broader exploration of the character than I would have otherwise considered.

Above is one of my favorite images of the Manhunter from Mars, a lovely postcard I picked up on eBay about a decade ago. I used to feature it prominently on my old site, along with the two articles Who is the Martian Manhunter? and J'Onn & Me, neither of which have been restored to the net.
Posted by Diabolu Frank at 12:00 AM