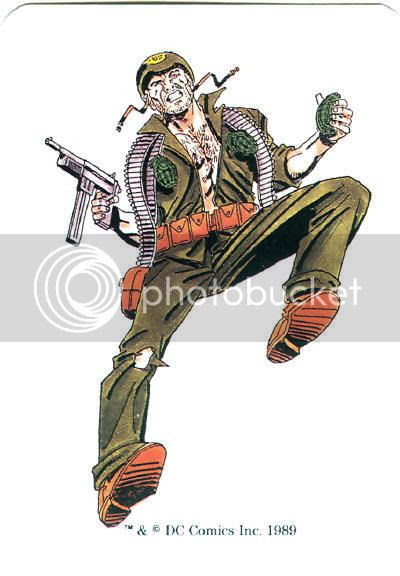 Gerard Jones in The Comic Book Heroes opened his chapter on 1986 with a paragraph full of sentence fragments that made the case for it being essentially the greatest year for comic books ever. Think about it: Miller on Batman and Daredevil. Moore on Watchmen, Swamp Thing, and "Whatever Happened to the Man of Steel?" Byrne on Superman and Action Comics. Chaykin on the Shadow. The Charlton Heroes resurrected at DC. The CBLDF established. Murray & Golden's The 'Nam. Maus. Fleisher vs. Groth & Ellison. Kirby vs. Marvel. Dark Horse Comics founded. Marvel bought by New Line Pictures and launching the New Universe while DC rolled out it's first post-Crisis on Infinite Earths offerings. It was as though Jones were riffing on Billy Joel's 1989 hit "We Didn't Start the Fire."

Speaking of '89, that was all over by then. The Shadow was canceled. The Legion of Super-Heroes were screwed by the "Five Year Gap" and retroactive removal of Superboy. The promise of Cosmic Odyssey flamed out in another misguided attempt to reclaim the glory of Kirby's Fourth World Saga. Miller was off making movies. Moore had sworn off DC entirely. Byrne left DC, and in his place were Action Comics Weekly and the long dull road to the Death of Superman. The draining of Justice League International dry had begun. There was the noble but doomed experiment of Piranha Press. Perez was off the art on Wonder Woman, and only on Action Comics for a few months before the one-two punch of War of the Gods and The Infinity Gauntlet left him sitting on the sidelines for much of the next decade. Hawkworld ruined Hawkman continuity and made him a murderous junkie fascist. Emerald Dawn made Green Lantern a drunken convict. Most of DC's Silver Age relaunches were middling or busts, its history was in tatters, and all those '80s titles you loved were dead or dying. Rather than being the beginning of comics as a widely accepted art form, 1986 was the peak from which to descend, one superficial knock-off of DKR & Watchmen at a time. There were bright spots, like Neil Gaiman's The Sandman and Morrison's Doom Patrol, but the onset of '90s ennui was imminent. 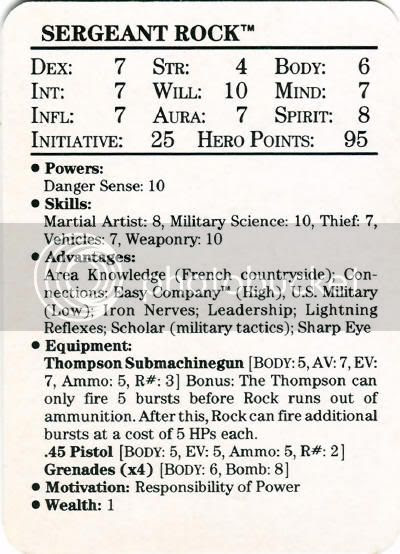 I mention all this because here's a Sgt. Rock RPG card, surely because after fifty years of near continuous publication, a toy line, and a still simmering (but eventually aborted) Arnold Schwarzenegger feature film adaptation, his ongoing series had been canceled in 1988. Sgt. Rock Special continued as a (mostly) quarterly reprint series until the movie plans were official dead in 1992, and sporadically ever since. Rock was one of the last living reminders of a time when DC reached out for mainstream audiences beyond the valley of the dorks, and clearly there wasn't enough love from the cape & cowl set to save it. This card's inclusion was itself a commentary on how out of place Sgt. Rock was within the comic scene.

That said, Frank Rock had surprisingly good dexterity and a completely predictable hardcase constitution. I've never read that many of his comics, so I'm really impressed with his Intelligence of 7. That cache of strong Hero Points, martial skills, and the Danger Sense kept him alive through more action than most in The Great War, and he can actually use lethal weaponry without being in any way out of character. I suddenly find myself wanting to pit Rock against a bunch of street vigilantes like The Huntress and The Question in a craphole like Hub City for some urban warfare. It could be like Death Wish 3, or when Jonah Hex got transported to a post-nuke wasteland. It's so wrong, and yet, Easy Company versus the Watchmen fills my mind with such imagery...

Oh it could try to be like Death Wish 3, but even as awesome as it would be to see Frank Rock mowing down punks in the streets of the DCU, nothing will ever be as awesome as DW3. "I owed you that one dude!"

The odd thing about including Rock is that, without the rest of Easy or some other War characters, how do you use him in a superhero setting? That's like including Conan in a Marvel game but no other S&S elements. Unless you are going for that sort of What If? scenario like you described, but if you want to play out a Sgt Rock comic, you are going to have to do a bit of extra work.

I guess even if we brought in Comic Book Thugs that Look Like Charles Bronson, there's still that missing Ed Lauter Factor. Curses!

I imagine you were not alone in your outcry, as Easy Company got their stats in The World At War sourcebook a couple of years later. Sgt. Rock even starred on the cover, reading a magazine about... Commander Steel?!? That may come up again in the near future...

If I remember correctly the rulebooks had a whole slew of WWII characters and the back of another of the books in the set had rules alterations for WWII gaming and gaming in other genre types than Mainstream DC Universe where there were rules against killing and all that...