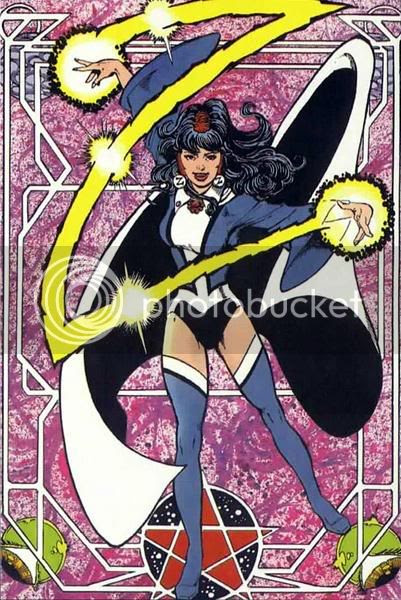 I probably saw Zatanna for the first time just like this, drawn by George Pérez in the costume he designed for a Justice League of America cover or somesuch. I didn't know then how hard DC was trying to turn her into their own Scarlet Witch at the time, but I do know it never took. I bought her two part guest appearance in early issues of Blue Devil, and like most readers before and since, was more impressed by her girl-next-door approachable quality than the Marvel character's traumatized drama queen style. Unfortunately, DC's never stopped trying to saddle poor Zee with neurosis. They killed off her father before her eyes, subjected her to a magical quasi-rape, sent her off for a time with her assailant, massively reduced her powers, dumped her at Vertigo... it just never seemed to stop.

As a result, I try to follow Zee's appearances, but not compulsively, attempting to pick the gems from the junk. I don't care near as much about what she can do as how she handles what comes, but it would be nice if someone could figure out the right balance for once. Folks tell me good things about Paul Dini's handling in her new solo series, and I'm pleased to see DC is finally responding to Zee surprisingly large fan base. With Scarlet Witch irreparably damaged, there's a place for too sorceress in comics Zatanna could fill. Further, she has the pedigree of a legacy character, but is actually much more famous than her father. Zatanna is a contender for independent icon status, and I'd love to see her go all the way.
Posted by Diabolu Frank at 12:00 AM

Have you read her Seven Soldiers mini? If you haven't read all of the miniseries, some stuff doesn't make as much sense as you might like, but the characterizations are good and it's pretty enjoyable in general.

I'm afraid I have not. I was trade waiting, unaware that DC would only collect the mini-series within the larger context of the crossover. I'll eventually buy the floppy issues. However, I'm gearing up for a major increase in Vixen coverage at my Justice League Detroit blog, and since I've given Zee a lot of attention there, I'm putting her on the backburner for a bit.