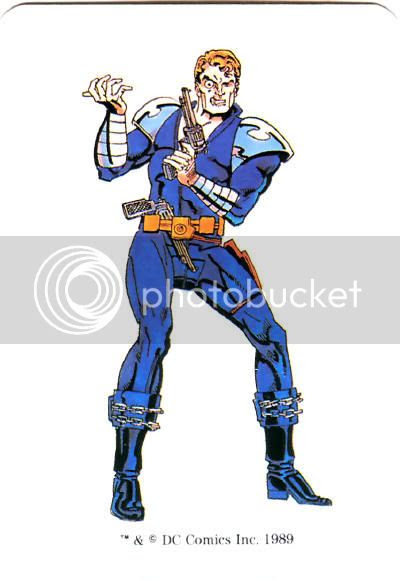 For some reason, I thought Jonah Hex was more of a "classic" character when I was a kid. I mean, a Hex ad was in one of the first comics I ever read, so imagine my surprise to learn he wasn't much older than me at the time. I wasn't familiar enough with Spaghetti westerns back then to realize Hex was basically just an uglied-up comic book adaptation of Clint Eastwood's various mercenary characters from then-disreputable Italian movie productions. Hex was himself only fifteen years old when DC finally decided to cancel its last cowboy comic, and turn Jonah into a temporally displaced Mad Max rip-off instead. None of which mattered, because Hex was plainly the baddest sumbitch around, and that attracted really talented artists to draw him, so I had a hankering to read his adventures long before I could get my hands on any.

Since Michael Fleisher wrote so many of Hex's stories, weird was surely ingrained into his being. Not only would that explain the post-apocalyptic tangent, but stuff like never seeming out of place on cartoons or JLA crossovers or whatever other nutty stuff was thrown his way. Jonah's even come face to face with his own stuffed and mounted corpse, and probably just took solace in the fact he could tell he had a lot more years of hell to raise before his trip to the taxidermist. Whatever comes, Hex is liable to just make some dismissive sound, adapt, and keep working out in his head who he figures needs killing in his immediate future. The reb abides. 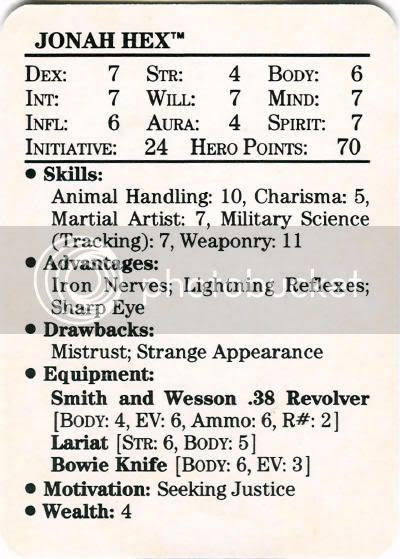 For instance, Hex found himself not just decades into our nuked out potential future, but at least a good five years ahead of comic book fashion, sporting those Rob Liefeld shoulder pads before Rob himself had made it to DC. That same future apparently requires juggling as a survival skill, the pin/ball going out of frame my only explanation for that ridiculous pose. An internet friend suggested he might be threatening to shoot an invisible giant in the scrotum. Hex is just hard enough to do it to, and if that sounded gay, are you surprised my mind went there while looking at Hex in his cruising gear? A man has to go through a lot of two dollar whores to live down that leather queen get-up.

As far as stats go, Hex fits right between Blackhawk and Sgt. Rock, and yes that was probably another queer joke involving lunchmeat. Hex has the now seemingly standard contact stat column of 7s and a 4 in Strength. He's got the mental and bodily endurance of Rock, and a hair more Will and Spirit than 'Hawk. His bottom row stats are otherwise lower than either, which I guess indicates Hex is a bit more broken in his soul. Jonah is the best in a fight, whether with fists or armed. Hex is the only one of the three with Animal Handling, which is two points higher than Wonder Woman's. His Military Science is limited to tracking, and three points beneath the Amazing Amazon's. Never figured Wonder Woman would need to be called in for comparison with Hex, but Scalphunter never got a card, so that's how it is.

Okay, Johah Hex in a futuristic shoulder pad suit was NOT what I was expecting when I saw the title of your blog post. Oh, comics, you never cease to surprise me.

Oh yes, Hex's time in the then near future (haven't we caught up to it by now, I don't recall).

What a whacky world comics are. :)