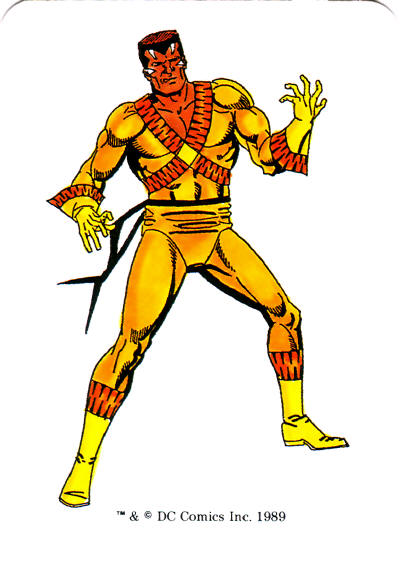 Aw hell, yeah! It's the Brrrrronze Ti-GRR! I've previously discussed my acquaintance with Benjamin Turner, and while I let a number of beloved characters go to other blogs for crossover's sake, the Task Force X blog was going to have to do without my man! Ben even got above average art, despite needing to get that carpal tunnel syndrome looked into.

The Tiger has some awesome stats for a non-meta combatant. A Dexterity of 10 is peak human, and it isn't exactly common among superhumans, so good luck laying a finger on him. A strength of 4 is about right for Ben's build, and his Body of 6 is also peak human. Intelligence of 7 makes some sense if you reach back to Denny O'Neil's take on the character, but even then it seems awfully high. However, much of that comes from his martial arts expertise, on which he truly meets the criteria of "a professional who is one of ten authorities in a field of study or a born genius." Ben Turner has a doctorate in whoop-ass, and is one of 3-5 experts on the subject. Will isn't in short supply either, as the guy decided to lead a squad of cutthroat criminals into suicide missions for five straight years of publication, with a side of attacking Batman. Mind of 7 is fairly disputable though, given his listed drawback of not-so-Minor Psychological Instability. 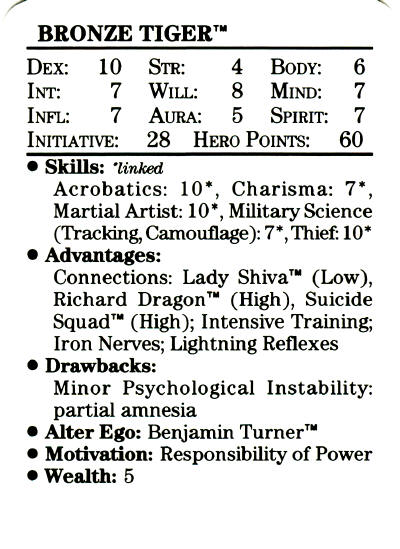 Let's jump ahead to skills for a moment. That Martial Artist of 10 is comparable with Batman (whom he beat) and Kobra (who also beat Batman, but few else.) I think it's nuts that Lady Shiva isn't a 10, but if anyone was going to rank above her, it would be guys like Ben and Richard Dragon. However, Acrobatics of 10 is also in there, and I've never seen anything to remotely validate that in the comics.

I love Bronze Tiger, but an Influence of 7? How many people even know the guy exists, either in the comics themselves or amongst fandom? Dude was shown up by Rick Flag, a charisma vacuum, so color me incredulous. I'd also drop his Aura by a point and Spirit by two. It may seem like I'm harsh on Ben, but there's a serious disparity between his potential and it's fulfillment on the printed page. I'd love to see the Bronze Tiger truly live up to these stats, but I don't feel he's there yet, or likely will be anytime soon.

Belated thanks to Tom Hartley, whose offering of a batch of about 30 character card scans was the taste I needed to seek more. He then sold his box set for a very reasonable price to a poor student to facilitate this crossover, because I just had to scan them all for myself.

Vic Sage has a Martial Arts stat of 8 and he got his head handed to him by Lady Shiva, and she's not a 10? This game is rigged I tell you, rigged!!

I'd like to know Batman's stats just to see how ridiculously over-inflated his are. Oh, wait, his wealth would be like 5,000,000 so I guess that makes him win every battle?

Whoops-- I covered my intended comments here over at your blog...