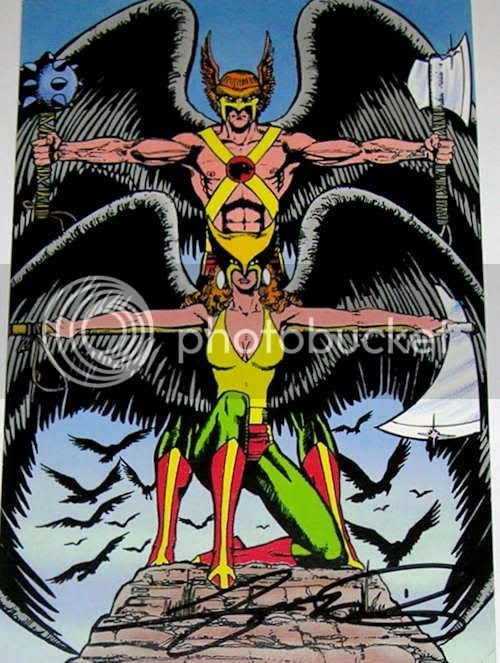 I've had a conflicted relationship with the Hawks. I can't recall a time when I wasn't aware of their existence, and Hawkman had one of the finest action figures in the Super Powers Collection. I salivated over the house ad for The Shadow War of Hawkman, but had to settle for guest appearances and team books to get any kind of fix. Not only were the Hawks mostly exiled from the newsstand, but when Hawkman did appear, he was portrayed as a self-righteous, pushy jerk.

I don't think I got serious about the character until the early '90s, when I took a crash course in Thanagarian studies. I picked up a trade paperback of the earliest Silver Age stories from The Brave and the Bold by Gardner Fox and Joe Kubert, the Hawkworld collection "As Above, So Below" by Tim Truman, the Tony Isabella/Richard Howell mini-series and special, and even completed runs of Hawkworld and the 1992 series.

There was so much to like about the Hawks, but also much to hate. In the '60s and early '70s, Hawkman was a mild-mannered space cop-- likable enough, but too milquetoast and narrow to live up to his looks. I preferred the easygoing and clever Hawkgirl/woman, as available. Hawkworld turned Shayera Hol into Shayera Thal, a knee-jerk ballbuster. However, if you could overlook the murder and drug addiction, Katar became more introspective and reserved. Hawkman eventually began to use his medieval weapons as expected, and Hawkwoman's temper was tempered, but any personality they had kind of fell by the wayside. The Golden Age Hawks came into the mix, and the continuity became so toxic, the whole premise went on a shelf for half a decade. I tried the 2002 relaunch, but it didn't do the job. Despite lovely Rags Morales art, an off-game Geoff Johns put me off.

At this point, I have a hard time getting excited by Hawkman and Hawkwoman. Unlike most DC characters, I'm not even sure who they are. Brightest Day indicates a return to the Bronze Age characterizations, but that still leaves Katar a hyper-reactive jerk and Shayera stuck in mild-mannered peacemaker mode. Can't win for losing, I suppose. I respect the characters' history, but it's tough to claim to be a fan anymore.
Posted by Diabolu Frank at 6:00 AM

I am a big Hawkman fan. I agree his figure was the best one in the Super Powers line. And the Shadow War of Hawkman ad in the 80s was awesome! Love the post.

I do have to disagree about the Hawkman revamp by Geoff Johns. I love the current Hawkman. Geoff did a good job of pulling the best aspects of all Hawkmen into one Carter Hall, in my opinion.

Good to hear from you!

Thanks. The Hawkman Super Powers figure was about the best of the bunch IMO.