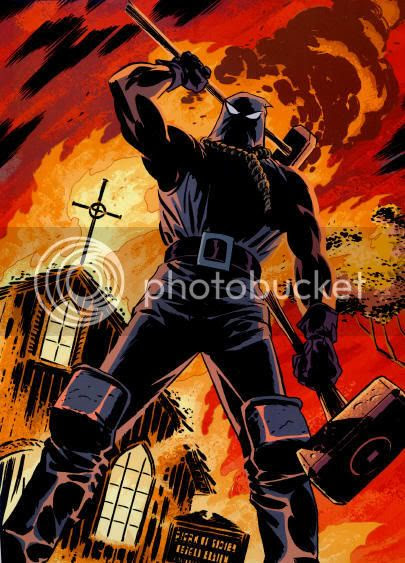 John Wilson was a Korean War veteran who fought with distinction, before returning home to take a young bride in Lucille, who then gave birth to their daughter Loretta. Wilson supported his family working at local machine shop in in a Knoxville, Tennessee, until the night of March 17th, 1957. Wilson’s wife and child were killed when members of the Ku Klux Klan, for reasons unknown beyomd the obvious, set his home ablaze. Wilson himself was lynched from a nearby tree and left for dead. Wilson survived, and freeing himself, fled to a cabin where he began formulating a plan for revenge. Forging a pair of oversized sledgehammer’s, Wilson took to wearing a pointed black hood “inspired” by the appearance of Klansman and looking out for their next hate crime against the African-American populace. In stylized garb wearing the noose that failed to end his life on he same night as his family’s, Wilson began a vigilante campaign against violent racists, for which the media dubbed him “John Henry.” Meanwhile, the authorities remained unaware of the connection between Wilson and “Henry,” claiming Wilson himself had murdered his family and fled justice.

For years, “John Henry” continued his personal war against the Klan, appearing frequently and with the typical result being the hospitalization of those he encountered. The crusade caught the public’s attention, leading to an article by famed journalist Vicki Vale and a cover story in Time magazine. His revolutionary fight stoked the hearts of many, including John Jones, the Manhunter from Mars, and a young John Henry Irons, later to be known as Steel. His battle ended in 1959, when a battered “John Henry” staggered to collapse down a back alley while pursued by an angry mob. Falling through a fence, he was found by a young blonde girl who’s back yard he found himself in. As he removed his hood, Wilson pleaded, “Please, child... help me. Hide me.” The girl looked away from Wilson with her blue eyes and shouted for the Klansman, referring to the fallen hero with a pejorative not to be repeated here. Three nights later, the most respected television journalist in America shared John Wilson’s heroic story with the nation, damning the Klan and those who conspired with them as terrorists. He revealed on discovery Wilson was “beaten and humiliated, then hung from a post in town square and burned alive.” Only two photographs of Wilson are known to exist, one of his family in happier times, and the other of the grim vigilante wicked men forced him to become.

Creator Darwyn Cooke explained the origins of the character in the Absolute collection of his work. “Any effort to insinuate the DCU into the real world of the 1950s wouldn’t have been complete without looking at the civil rights issues of the day. The problem was DC catered to white culture, and there were very few black characters to explore this theme.

I finally settled on Steel, and John Henry Irons. Continuity tells us Steel didn’t come along ‘til much later, but I thought that perhaps I could retro-fit a backstory that shows a simpler man in a simpler time donning the mantle of John Henry to fight racism.”
Posted by Diabolu Frank at 2:04 AM

Labels: John Henry Irons, Who's Dat: The Codicil Directory of the DC Residuum