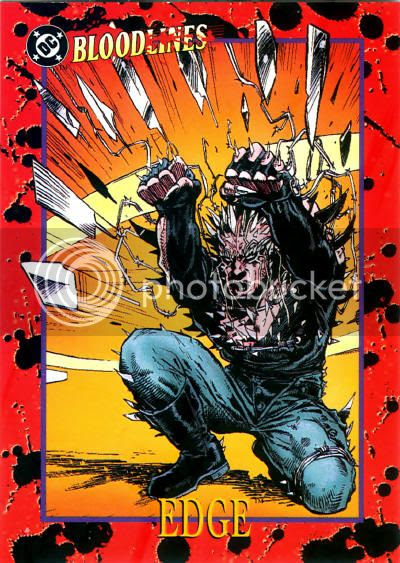 Tom O’Brien’s father passed away when he was twelve, forcing the youth prematurely into the role of man of the house. O’Brien developed a tough reputation as a protective shell against the world, but was a “knight in shining armor” to his family. Although bright, O’Brien skipped school to do odd jobs, before dropping out entirely to work full time. At some point, O’Brien struck up a friendship with John Henry Irons, and both lived in the same neighborhood around the time of Superman’s presumed death at the hands of Doomsday.

O’Brien was in his late teens to early twenties when, one night, he confronted a man he assumed was assaulting a young woman in an alley near where he worked. The supposed assailant turned out to be a co-worker of Tom’s, who was fending off the disguised alien predator Angon, which proceeded to feed off O’Brien’s spinal fluid in his stead. Angon enjoyed the sweetness of its meal, which came to be an indication of humans that could survive the parasite’s attacks and develop super-powers. This proved true of O’Brien, who was discovered on a mound of less fortunate victims dumped in a sewer by the Underworlders who lived there. Upon reviving, O’Brien’s hair fell out, to be replaced by metallic blades of various sizes and degrees of sharpness. Believing O’Brien to be the murderer, the Underworlders fled the scene, and then reported their findings to the investigating super-hero then known as the Man of Steel. This was actually Irons, who had been searching for his missing friend. However, O’Brien suffered from temporary amnesia, and wrestled with Steel once the hero located him. Steel explained himself to O’Brien, and together the pair escaped arrest from police.

Joining forces, O’Brien and the Man of Steel managed to drive Angon away and rescue Tom’s younger brother Petey. Forgiven by Metropolis P.D., O’Brien vowed to find Angon, and force the alien to turn him back to normal. Taking on Petey’s suggested codename of Edge, O’Brien decided to pursue Angon to end its rampage. Edge learned of the existence of more Bloodlines aliens, and other victims like himself who had gained super-powers from their assaults. Edge joined fellow New Bloods Nightblade, Sparx, Loose Cannon, and Anima in tracking Angon to the Great Salt Lake, Utah. Near the Powell Institute, the New Bloods encountered a fresh victim turned metahuman, and fought this amnesiac, dubbed Prism. Cooler heads prevailed, as the team pulled together with the adventurer Johnny Peril to fend off attacks from the self-styled god of vengeance Eclipso.

The New Bloods around the globed shared an undefined connection to their attackers, and answered a call to rescue Earth’s heroes from the Bloodlines aliens ultimate manifestation. Edge was among the most prominent New Bloods who saw the aliens to their final defeat, and O’Brien was honored to meet the real Superman as a reward for his efforts. Edge’s further activities are unknown.

Edge produces razor sharp metallic shards of various sizes all over his body, most in areas where hair once grew. These blades have proven capable of rending steel and piercing alien armor. Because of their broad placement, the shards act as both offensive and defensive adaptation, since the blades have to be passed through to reach Edge's body. Edge can also eject the blades, as a whole or in part, from his body as projectiles. The expelled shards then rapidly regenerate.

Created by Louise Simonson and Eddy Newell
Posted by Diabolu Frank at 12:00 AM

Labels: Who's Dat: The Codicil Directory of the DC Residuum