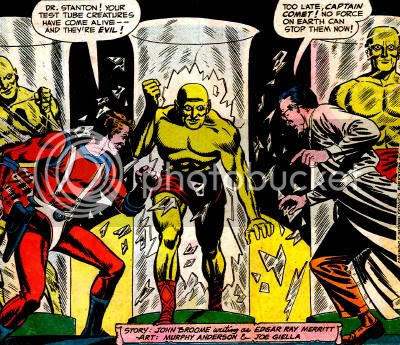 In Washington, D.C., a suspicious vagrant was brought to a police station. He'd been caught outside the Acme Chemical Plant, and when questioned, he wriggled free and escaped. The police were astonished by his green skin and bulletproof skin. Soon, it was all over the papers, with reporters wondering if these were perhaps aliens from Mars. To calm public anxiety, the nation's science-defense chief Dr. Stanton appeared on television to dispel the myth of the green men.

Renowned physicist Professor Zackro and his guest Captain Comet (sitting in full costume) watched the broadcast, and the Man of Destiny detected Stanton was concealing something. "His thought waves-- which are electrical in nature-- are being broadcast simultaneously with his words! If I can tune into them, I'll soon learn if my suspicions are correct!" Employing all of his telepathic power to pick up the mental signal, Comet exclaimed "great galaxy" upon learning the truth about the green men.

A year early, Dr. Stanton had convinced the Army Chief of Staff General Dalton to fund development of synthetic men from his invention neoplasm, "a chemical that lives and moves." A month late, from his bricks of green tofu, Stanton created his first synthetic man, possessed of all senses and the name Alpha. Five men total were animated, and named from the Greek alphabet. They were immune to poison, acids-- and strong enough to bend iron bars, allowing their escape. Captain Comet would have to join the top secret manhunt! Dismissing research, the Man of Destiny knew from memory the only locations in the United States where calcium nitrate, the Synthetic Men's food supply, could be found.

The Cometeer rocket made its way to the town of Calnit, near Great Salt Lake. Meanwhile, the deathless Synthetic Men had cut off all communications out of the town and herded its citizens into a warehouse. The Cometeer landed, and the townsfolk declared, "Captain Comet! He'll save us!" A green man fired a pistol at the Man of Destiny, whose unique mind-over-matter ability halted the bullet's flight. "He must be a superhuman!"

"In turn, Captain Comet sends a super-energetic wave of mental force at the green men," but their synthetic bodies were immune to his telekinesis. Although Comet's strength was greater than the synthetics', he allowed himself to be captured in order to gather more information.

That night, the Man of the Future watched as the Synthetic Men began to replicate the process by which Dr. Stanton had create them. Captain Comet could read their minds, and learned they planned to produce an army of synthetics to overtake the planet. While all five green men were isolated in one room, the Man of Destiny sealed off the door with his telekinesis. Captain Comet then ordered the townspeople to push whatever objects they could find against the door. "Hustle, everybody-- do what Captain Comet says!"

Dashing to his Cometeer, the Man of the Future returned with an emergency oxygen cylinder. Releasing its contents through a crack above the door of the tiny supply room, Comet soon found the Synthetic Men immobilized. Though still "alive" the green men were now rigid as stone. Captain Comet had deduced from their food source that the Synthetic Men breathed the nitrogen in the air, rather than oxygen. "Just as humans would perish in air of pure nitrogen-- so the Synthetics couldn't survive in pure oxygen! It combined with the calcium in their bodies to form calcium carbonate-- which is the formula for marble!"

The Synthetic Men were left in the town square as a monument, with the sign, "The five living statures placed here in honor of Captain Comet who conquered them-- and a warning to any others who plan a war against humanity!"